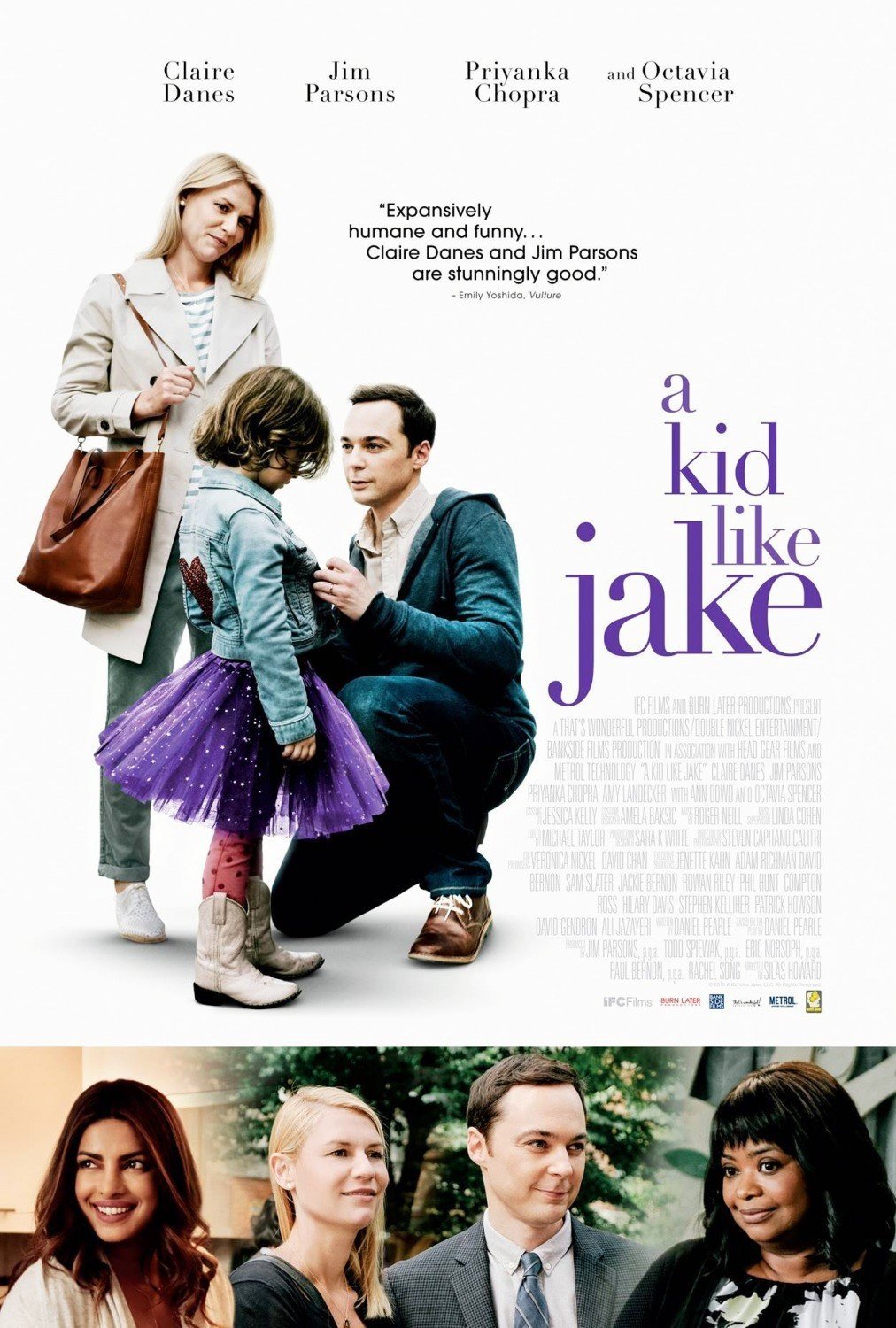 You’d think 2018 would be more progressive, but nope!

Alex (Claire Danes) and Greg (Jim Parsons) are a happily-living, loving couple with a son named Jake (Leo James Davis) who are all busy in the midst of applying to kindergartens. And with this being an affluent part of NYC, this means a whole heck of a lot. But as if this wasn’t tense enough, it turns out that Jake’s being acting-out in certain violent ways; he yells, throws things, and isn’t respectful to adults around him. But what strikes a lot of people around him as, well, “different”, is that Jake prefers to dress-up in girls’ clothes. Like a lot. Of course, Alex and Greg don’t think much of this, until it becomes apparent that Jake really likes wearing these girls’ clothes and these schools begin to take notice. Now, they both have to consider what’s not just best for them, as a family, but for Jake as well, and whether or not he wants to be seen as a boy, or not.

On the surface, A Kid Like Jake could have easily been just another topic-of-the-week, after-school special that’d be better suited for Lifetime or hell, at this point, even Hallmark. And for the first 15 minutes or so, that’s exactly what it seems like it’s going to be; it’s a little cheesy, not all that funny, not all that dramatic, and oh yeah, pretty damn sappy. At this point, I was wondering if they would actually be able to approach this subject with actual dignity, honest, and respect, without it seeming like it’s trying too hard to be relevant.

Thankfully, A Kid Like Jake gets much better and, surprisingly enough, turns in to that movie I was hoping it would become.

Eventually, it gets darker, a little more dramatic, very frank, and surprisingly, a little mean. But in today’s day and age, where you have a society that’s not nearly as caught-up-with-the-times as it should be and hate crimes against POC’s and the LGBTQ community happening quite often, you need a movie like this, tackling this kind of subject, to not back down or pull any punches. You also need it to be smart, understood, and accepting of all positions, which is why A Kid Like Jake is a lot smarter than you’d expect just by looking at it.

In other words, no one here is a hero, or a villain – everyone is simply just there to be there for Jake, give their own two cents on the situation, and give us a clearer view of what’s going on with Jake and his/her family. Director Silas Howard and writer Daniel Pearle could have easily made every character just a springboard or caricatures for what they wanted to talk about and not really dig deep, but everyone here has a heart, soul, and mind. Some people are obviously better than others, but for the most part, everyone feels like a real, thought-out, and fully-dimensional character, even if we don’t get a whole lot of time to spend with them.

Most especially, Alex and Greg, both played to perfection by Danes and Parsons.

For the most part, Danes does a good job with Alex, showing us a woman who may be a tad bit unhinged, but one that also loves and supports her son, no matter what. She wants what’s best for him and even if she doesn’t quite know what’s happening with her son, she is still there to love and support him no matter what.

Parsons’ Greg, on the other hand, is a tad more complex because we see him truly struggle with his son’s identity-crisis and whether or not he can accept it or not. It would be easy to paint Greg as “unlikable”, but he really isn’t; there are probably a million other fathers just like him out in the world, who are genuinely accepting of other people’s orientation, race, or beliefs, but when push comes to shove and it becomes personal, don’t quite know how to make sense of their own feelings. These are the kinds of characters we need to see more of in films, not because they strike up a conversation, but they show us that there are people who do genuinely mean well, but struggle with trying to keep up with that in a world that doesn’t quite know how to accept each and every person on this world.

It’s what we struggle with as a whole, but hey, at least we’re making our way closer to becoming something better.

Consensus: While it may seem like a sappy piece of drama, A Kid Like Jake turns out to be a much smarter, more complex take on a relevant topic, with some great performances to-boot.