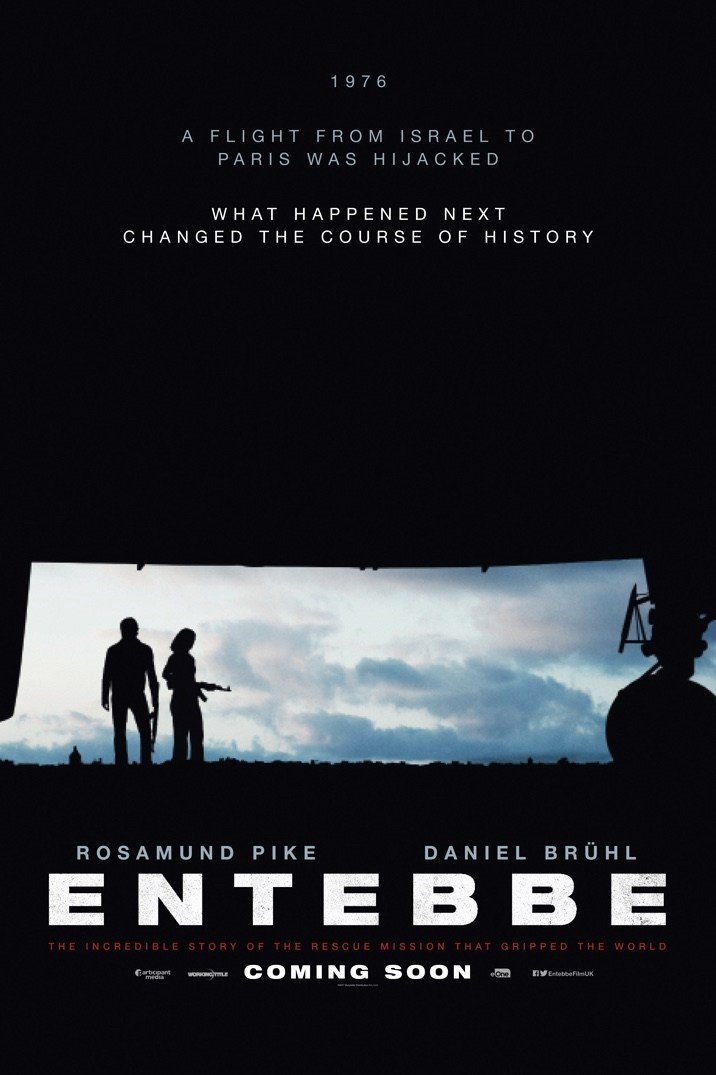 More reasons not to get on a plane.

In July of 1976, four terrorists hijack an Air France flight from Tel-Aviv to Paris and force the flight crew to land in Entebbe, Uganda. There, the Jewish passengers are held hostage, with their safety contingent on the release of dozens of terrorists jailed in Israel, Germany and Sweden. After considerable debate, the Israeli government employs the Israeli Defense Forces to execute a daring rescue. But two terrorists involved with the mission, Brigitte Kuhlmann (Rosamund Pike) and Wilfried Böse (Daniel Brühl), who both stick to the plan, also begin to think what the point of this all is and whether or not they’re going to make it out life. While Wilfired is fine with dying as a martyr, Brigitte begins to have a change of heart, wondering if she actually wants to go out like this.

While I usually stay away from trailers, I saw the one for Entebbe (it played before my Phantom Thread screening) and I have to give major kudos to the advertising team for it. The trailer made it out to be a quick, snappy, fun, exciting, and smart retro-thriller in the same vein as Argo, when in reality, it’s anything but. Mostly, it’s slow, talky, confused, messy, and most of all, boring.

And this is why I don’t watch trailers.

But it’s not like Entebbe is the worst thing ever, it’s just that it never really brings much to the table except a whole lot of discussion that we’re already having. Despite the terrorist attack at the center and the plan to stop it, Entebbe is also about relations between Israel and Palestine, and how it seems to pipe-dream that they’ll ever come to an agreement on something and settle the fighting. While this is a noble point worth being made, Entebbe seems to think it should just get points for bringing it up and having not much else to do.

Rather than being a, you know, compelling thriller about this terrorist-attack, the planning, the execution, and eventually, the end of it all, Entebbe is more about a few talking-points and not really going anywhere else. There’s so much talking, so much arguing, and so many discussions had on the phone, Entebbe loses all sense of what it wants to do, or even what it’s about. In the midst of all this hooting and hollering, however, are a bunch of dance-sequences by ballerinas to show, well, I don’t know really.

Unity? The art of dance?

As I said, I’m not sure and I’m sure that the movie doesn’t, either.

Which is odd because director José Padilha actually has a pretty solid track-record with keeping tension and thought-provoking discussion going simultaneously (Bus 174, to be the prime example). But he gets lost here, not really knowing what he’s making this movie for, even whom for. Even Rosamund Pike, Daniel Brühl, Eddie Marsan, and the countless others that show up here, while all trying their hands at accents, don’t really bring much to the table except just being a bunch of stand-ins for points that the movie wants to bring. Nothing feels real or genuine here, which makes you think: Why the hell was this even made? To remind us of this awful event? Or, to just get a conversation going, again?

Both can be done with a simple click of the internet, and without having to spend nearly two-hours watching and supposedly, learning.

Consensus: On paper, Entebbe should work, but instead, it plays like a preachy, rather slow drama that never picks up momentum, nor figures out what it wants to do, except talk. A lot.