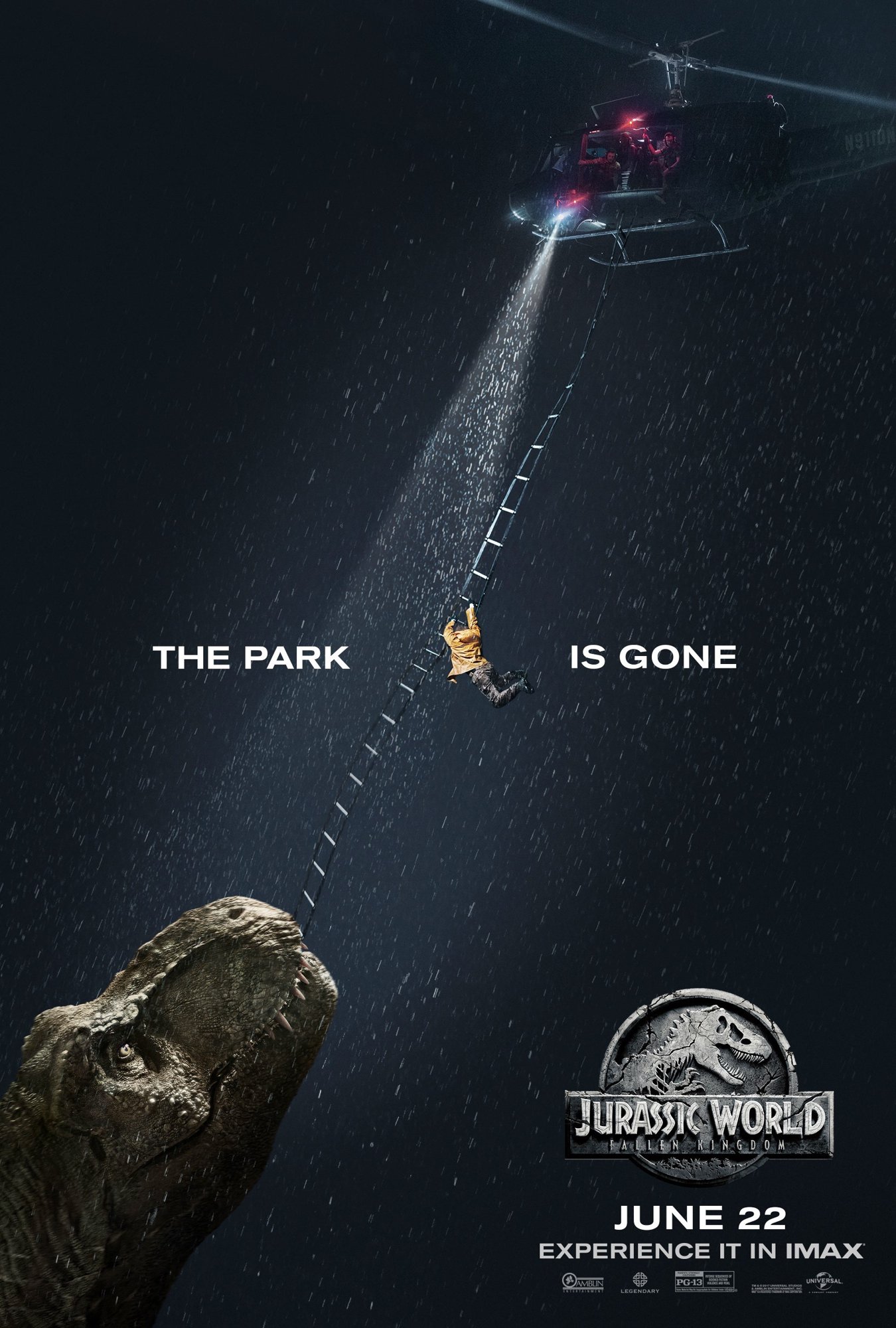 Three years after the destruction of the Jurassic World theme park, Owen Grady (Chris Pratt) and Claire Dearing (Bryce Dallas Howard) reunite and return to the island of Isla Nublar to save the remaining dinosaurs from a volcano that’s about to erupt. Cause once the government explains that they’re not going to send any help whatsoever, animal rights activists and groups all band together to save as many as they can, with a billionaire (James Cromwell) leading the charge. But once Owen and Claire get to the island, they realize that they’re dealing with something far more serious than just dinosaur-extinction (again) – they’re also dealing with corrupt, evil masterminds who may be using these dinosaurs, not for the greater good, but for total and complete world domination. Now, it’s up to the two dinosaur-saviors to hopefully band together, put their differences aside, and stop these evil forces at play, once and for all, before they lose all the power and hope that they have left in the world.

Here’s the thing about messages in movies: If you’re going to give them, go all the way with them. Don’t half-ass them by throwing in a few lines at the beginning of the movie and then totally forget about them nearly two-hours later. No, constantly let your audience know the message you’re trying to spread and do so as much and as effectively without ever being heavy-handed or obvious – it’s a slippery-slope, I know, but it’s one that, when done correctly, can speak volumes to the average movie-goer, make them think a little bit, and most importantly, think they walked away from something that was more than just a bunch of loud crashing and banging.

And at the center of Fallen Kingdom, there’s a message about the right to preserve certain species over others, whether or not it gets in the way of the greater-good, and also, if we have a right to doctor science, without leaving everything up to chance. This gets brought up a lot in Fallen Kingdom, which is interesting and a tad more effective than I expected; once we see that all of the dinosaurs who were also, no less than three years ago, devouring human-tourists, actually face their own extinction and have nothing to do about it, it’s hard not get a little choked-up. The movie is clearly hinting at something far more real and relevant that’s happening in today’s world, where dozens of species are on the brink of being endangered and the government’s not doing anything to stop it from happening, and for awhile, it’s compelling.

Then, as expected, it gets silly. Very silly, in fact.

And that’s the weird mix-and-match of Fallen Kingdom: It can be very serious and dark at some times, but at others, also very light and goofy, as if it’s the first movie. Directed by J.A. Bayona, who has an extensive background in horror, Fallen Kingdom feels a lot more serious and horror-like than the first and almost comes close to the tone, the look, and the feel of the Spielberg original; you get the sense that it’s not fun and games anymore, there are stakes at-play, and yes, lots and lots of things will die. There’s a few sequences that, despite being awfully stupid, are also effective in that they use sound, space and darkness really well, making perfect sense as to why someone like Bayona was chosen for this job and why more tent-pole projects just like Jurassic Park should take a chance on more inspired directors who will get their vision through, yet also, still be able to play by the rules and offer genre scares.

But that said, Fallen Kingdom still can’t help but feel like it’s being brought down by the sheer stupidity of its material. This is expected with a big, loud, and noisy blockbuster released directly in the middle of summer, but there are times when the constant clanging and banging takes away from the enjoyment overall. Fallen Kingdom wants to have it both ways – be dark, serious and have stuff at-stake, yet also, play it silly, wacky, wild and have goofy sidekicks who can hack and heal dinosaurs. It’s just an odd combination that worked quite well in the jumpy, yet bright and colorful original, but here, when things are much meaner and serious, doesn’t.

So yeah, there will most likely be a bunch more of these and they will continue to make tons and tons of money, which is fine. I don’t mind this product as much as I thought I would, but here’s to hoping that the Jurassic World franchise can get itself together a bit, realize what works, what doesn’t, and not try to be so damn goofy all of the time. Sometimes, it’s not so bad to take yourself a little seriously, especially when you’re dealing with the mass extinction of the human and dinosaur-race.

But then again, maybe I myself am just too serious. Whatever.

Consensus: While there are still plenty of thrills, chills and excitement, Fallen Kingdom is also weighed down by a great deal of stupid writing and an uneven tone that never fully figures itself out.