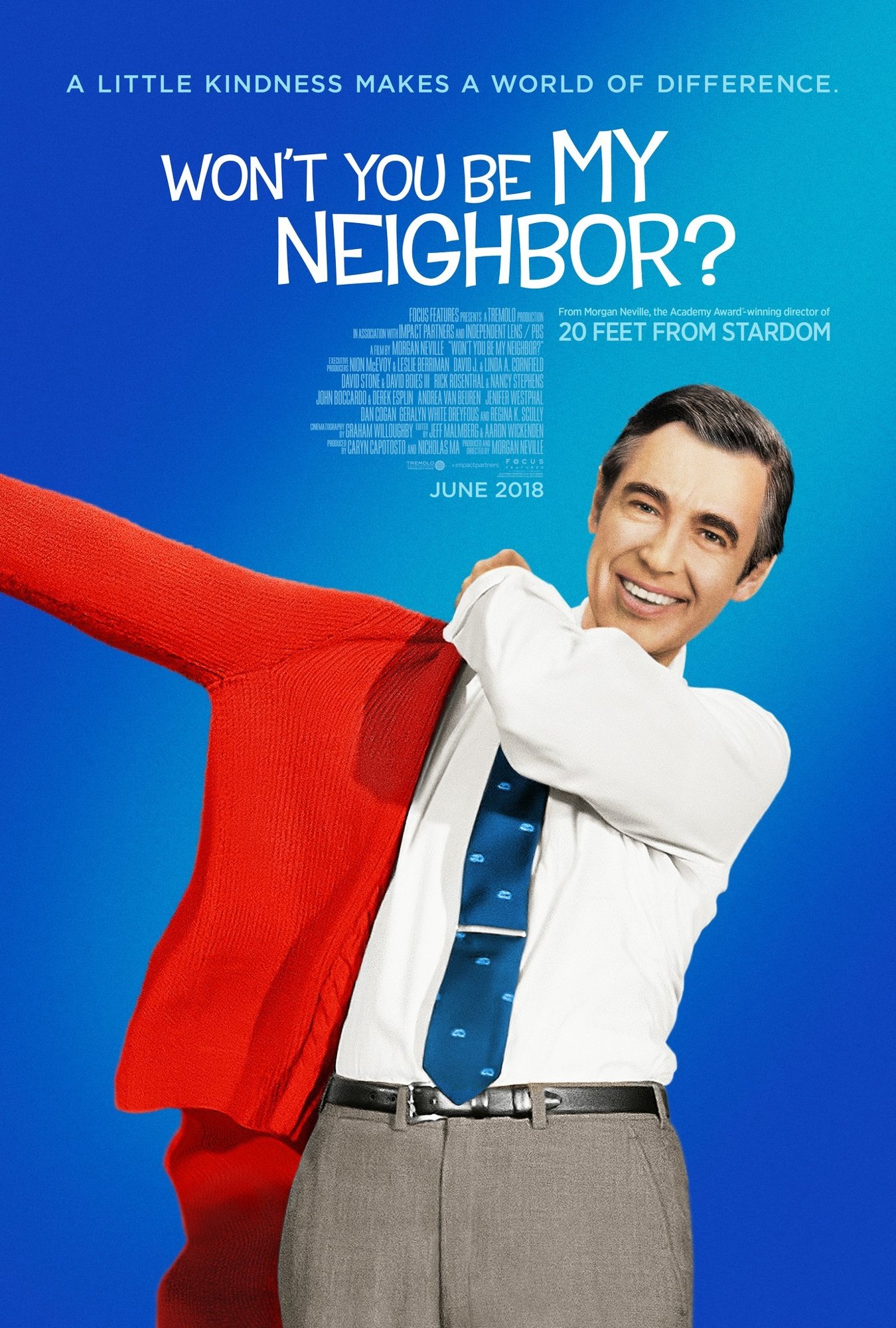 Just be nice to one another, dammit!

Fred Rogers, to many people of a certain age, was an iconic figure for children’s television. He wrote, directed, produced, and starred in a little show called “Mr. Rogers’ Neighborhood”, in which he used sock-puppets, songs, dancing, and above all else, human-interaction, to teach children about such beautiful things in the world like kindness, humility, feelings, and most importantly, love. It’s what made him such a public-access staple for so many decades and won him the love and adoration of all families everywhere. Now, here is his story.

I knew I was a goner within the first five-minutes of Won’t You Be My Neighbor?. Mr. Rogers shows up, opens his door, sings his song, takes his jacket off, hangs it up in the closet, throws on his sweater, sits down, takes off his shoes, puts on his slippers, and lastly, asks the question: “Won’t You Be My Neighbor?”. Even just typing this, I kid you not, I’m already tearing-up a little bit, which is weird to me because unlike my older family-members, I didn’t grow up on Mr. Rogers.

Sure, he was on by the time of my birth, until I was at least seven, but considering I was a child of the 90’s, my attention went more towards cartoons and silly, high-wire, fast-paced game-shows aimed more towards kids my age. I’m familiar with Mr. Rogers, have seen a bunch of his stuff and have a solid understanding of the kind of person he was both in front of, and behind the screen, so why on Earth was I crying so much, literally within the first five-minutes?

The man himself was such a powerful image of hope, love, kindness, and acceptance that watching him on the screen, being himself, preaching about being good to one another, and not hiding who he was and what he was all about, really, did a number on me. He was the kind of celebrity and television-persona that was exactly that person, without any real skeletons in the closet, and genuinely believed in what he said and did, regardless of who was fitting his bills and sponsoring his show. He’s the closest thing to a genuine saint as we’re going to get and he makes you hope and wish for more personas just like him, especially in today’s awfully troubled-times.

Which is why director Morgan Neville didn’t really have to do too much here to really drive home the emotional-point he was trying to make – just showing Mr. Rogers on the screen is more than enough. But still, he allows us to see and understand the man for who he was, what he represented, and believe it or not, the sort of risks he took being the person he was. Crazy examples like discussing the Vietnam War within the first week of his show; explaining what words like “assassination” meant; having a black police-officer on the show and taking a foot-bath with him; and one that surprised me the most, actually trying to talk to adults about their own problems, fears and hopes of the world. Of course, none of this stuff really holds-up in today’s climate of television, but that’s sort of the point; Mr. Rogers wasn’t making this stuff for brain-teased adults, but for kids, from the late-60’s, to the early-aughts.

And yet, when he tells a child that they’re special and he loves them for who they are, it’s hard not to well-up. Even just a little.

And that’s why Won’t You Be My Neighbor? is, like its subject, special in all the right ways. Sure, there are still some issues I had with the film – it doesn’t go nearly as deep into the person of Fred Rogers as I would have liked, certain issues like gay-rights remain a weird blip on his radar, and also, the fact that he was a card-carrying Republican, yet, acted like such a huge liberal, preaching out against the establishment and certain politicians for being war-mongers – but still, there was never a problem too big or too glaring to really take away from my emotional-stake in this movie. You feel the love, the understand it, and most importantly, you want to give it to everyone around you. You almost wish that Mr. Rogers were alive today, yet, you also wonder: How would he be able to handle all of the cruel evils of the world? A lot has changed in the world since he passed away in mid-’03, would he have been able to cope?

The better question is, I guess, why not? And also, will you?

Consensus: Honest and emotionally rich, Won’t You Be My Neighbor? focuses on its subject, exploring the man, the myth, the legend, and also reminding us all to be nice and loving towards one another, just as Mr. Rogers would have.