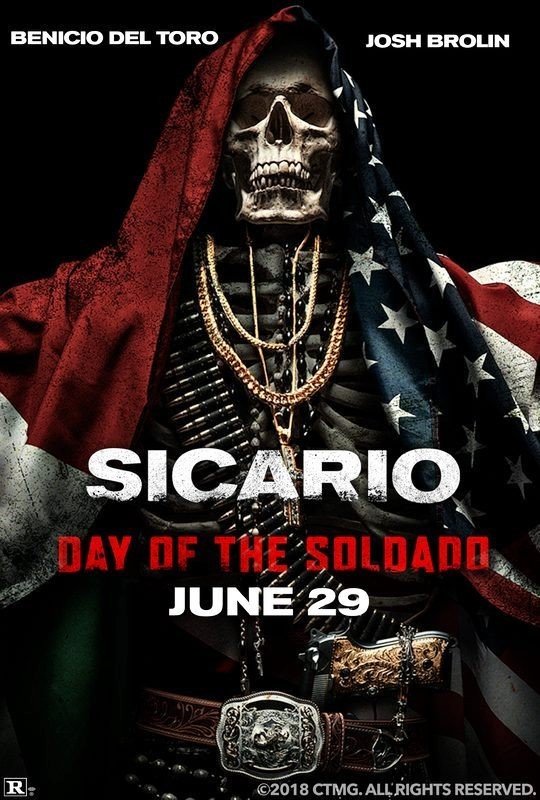 Drugs are bad. But is the government worse?

FBI agent Matt Graver (Josh Brolin) returns to action to fight the bad guys and calls on his usual mysterious operative Alejandro Gillick (Benicio Del Toro), to continue to battle the war on drugs. And now, this time, the Mexican drug cartels start to smuggle terrorists across the U.S. border, making it not only harder for the government to figure out who is a threat to the rest of society, but just how on Earth they are able to maintain such an issue. This is where they get the bright idea to start a war between the various cartels, in hopes that they’ll savor all of their blood, sweat, tears, and energy on each other, and leave the gentle lands of the U.S. alone. However, their plan for that goes South (literally), and now it’s up to the FBI, including various other players at-work, to figure out how to handle this situation once and for all.

First things first, Soldado is not as good as the original Sicario. Sure, it’s still taut, suspenseful, surprising, and a little disturbing, but it’s also nowhere near as smart, taut, frank, and surprisingly as beautiful as the first. If Sicario was the crown-jewel of the family, Soldado is the black sheep that causes a lot of problems and a lot of disruption, but mostly, turns out alright. You wish for it to be better, but it’s fine as is, you learn to accept it and just move on.

Which is a weird way to compliment a movie that’s surprisingly exciting and tense, right?

Well, unfortunately, when you have an original that is so good, it’s hard to not compare, but Soldado gets by on its own just fine because it seems to know and understand the differences from the first, and doesn’t try to be ultimately like that movie. The movie is still about the war on drugs and the lengths to which the government will go to combating it, and this one is, too, but it’s also about the deep lies, cruelty, and overall brutality that living these harsh lives are, for both sides, too.

Director Stefano Sollima (of the great gangster show Gomorrah, please watch), knows how to make this material crack and pop, even when it seems like nothing is really happening. The first flick was a lot louder and action-packed, whereas this one takes its time and constantly builds itself to the point of when the action starts to all take place, it’s that much more effective. It’s also much more bloodier and unsettling, even when it seems like the movie itself doesn’t know what it wants to say about all of that. Still, writer Taylor Sheridan seems like he’s got a knack for these kinds of stories and it’s hard to really wish that he would change his ways.

If it ain’t broke, definitely don’t fix it.

Same goes for the ensemble who, even without Emily Blunt around, still do a fantastic job. Josh Brolin’s Matt gets far more development here and allows you to see the human behind the rough and tough facade of a man who has the gall to interrogate terrorists while wearing crocks. Meanwhile, Benicio Del Toro shows up again as Gillick and well, for lack of a better term, steals the show. Simply by just standing there, Del Toro takes over every scene, has you feel like he’s lurking in the background somewhere, giving us a character who has seen and done some awful crap, yet, still has something of sympathy and a heart. It’s how he was in the original and once again, he’s great here, still finding small, yet smart ways to surprise us.

Consensus: Though not as good as the first, Soldado is still a tense, surprising, and rather well-acted thriller that doesn’t adhere to everything the original did and smartly so.