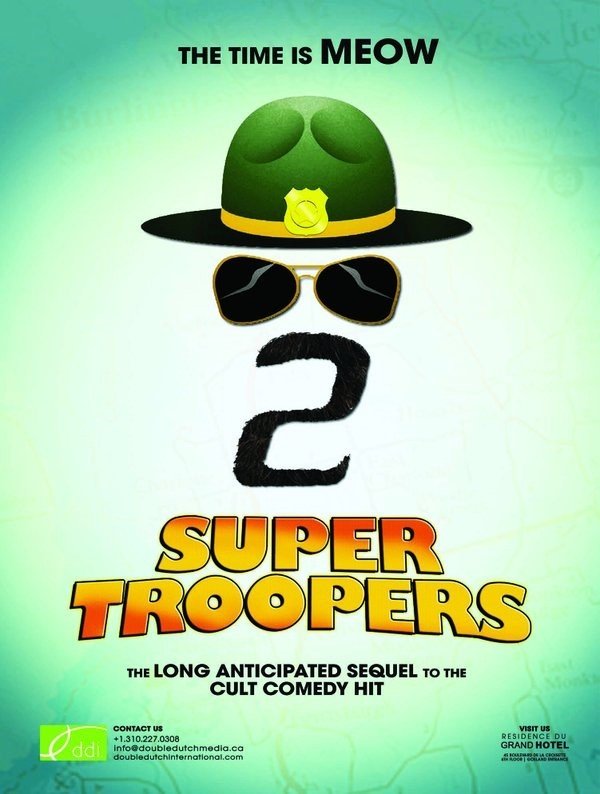 It’s been a long, long time since we last caught up with our favorite dopey law-enforcement officers and well, a lot has changed. And in a way, it sort of hasn’t. Fired for their previous shenanigans, former Vermont Highway Patrol officers Thorny (Jay Chandrasekhar), Farva (Kevin Heffernan), Rabbit (Erik Stolhanske), Foster (Paul Soter) and Mac (Steve Lemme) get another shot at redemption from Capt. O’Hagan (Brian Cox) and Gov. Jessan (Lynda Carter). This time however, they’re stationed in a Canadian town that’s transitioning to U.S. sovereignty and there’s already some complications to be had, what with the culture-shock and the sense of not knowing what Canadians are all aboot. To make matters worse, there’s a mayor (Rob Lowe) who may not be up to any good and a whole lot of drugs that keep funneling in and out of the little town.

As is the case with most comedy-sequels, especially ones that take as long as Super Troopers 2 took to make, they’re usually hit-or-miss. They can sometimes have funny jokes, while also giving fans the same old fun ones from the first, to remind the audience of a time when life is simpler and to also remind you of what you fell in love with in the first place. A lot of comedies do this and occasionally, it works because they do something far more interesting and unique with the joke.

Instead, it’s much more of a silly reminder that the original, while funny in a bunch of bits and pieces, still relied too heavily on silly gags that didn’t do much to help the plot out. As is usually the case with Broken Lizard, there’s a lot of weirdness, a lot of ad-libbing, and a lot of sex, fart, and weed jokes. Told in a smart, intelligent way, they can still work – unfortunately, that didn’t really happen in the first and that doesn’t happen much here.

That isn’t to say I didn’t laugh, because yes, I sure did. There’s a couple of bits where you can tell the cast and crew just got together, threw whatever they could at the wall, found out what stuck, and rolled with it. There’s of course a lot of stuff that doesn’t stick and yet, for some reason, they still roll with it, but because it’s all subversive and all weird, it still kind of works? I’m still not sure, really.

The only real bit where I found there to be any true, actual thought was everything concerning the Canadian Mounties and how they’re portrayed. Of course, their accents are wildly over-the-top and silly, but Super Troopers 2 surprisingly offers some food-for-thought by showing that there’s a tension between the Mounties and the troopers, all because of what they think the other represents, looks like, acts like, and is. This is interesting because when they realize that they are more than just what they represent, they actually start to open-up a bit more and realize that deep down inside, they aren’t that different, regardless of accents or hobbies.

Maybe Super Troopers 2 is trying to make some sort of a social-statement?

Maybe. I don’t know. What I do know is that the whole gang is back, everyone’s clearly having a blast and while it’s not always an absolute, total laugh-out-loud riot, it’s still one of those movies where the fans get treated to what they want, some laughs are had, some aren’t, but mostly, we’re happy that the gang got their sequel. Even if it did almost take two decades to get it made.

Consensus: Even with the long wait in between films, Super Troopers 2 still works as fan-service, regardless of if the jokes land, or not. Which, in most cases, they don’t.