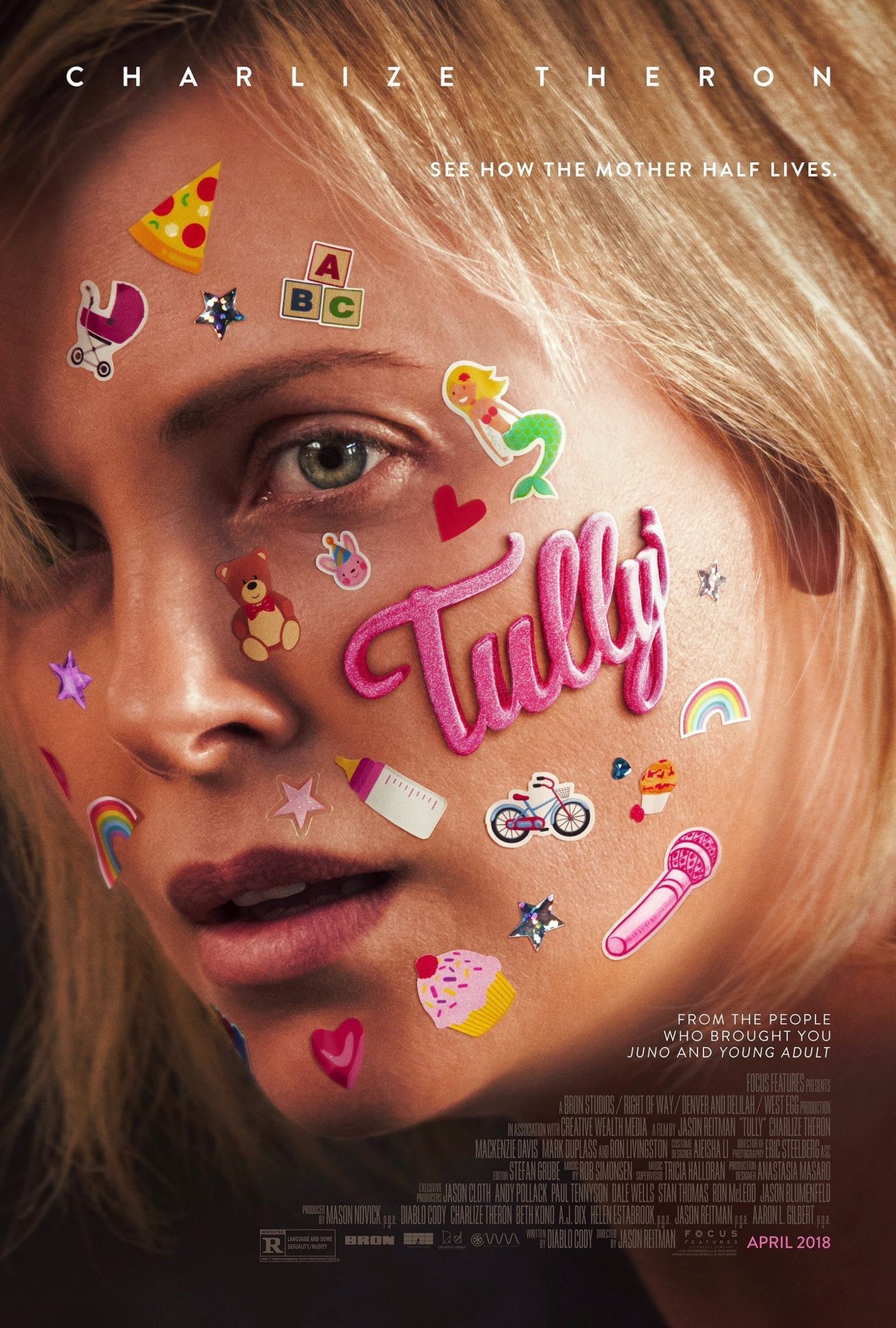 Sometimes, you just need a little help from a manic pixie dream girl.

Marlo (Charlize Theron) probably didn’t expect her life to turn out like this. At 40, she already has two kids, with a third on the way, a husband (Ron Livingston) who isn’t always home to help out when she needs him the most, a son who is described as “quirky” by the private school he attends, and is always too tired and/or too busy to really do anything she wants. Now with the third kid out of her and crying just about every single second of every single day, Marlo decides that it’s too much and desperately needs help, in any way that she can find it. Enter Tully (Mackenzie Davis), a night-maid who helps out with the baby and eventually, with Marlo to gain some sanity and perspective on the life she’s living. Together, the two form a sweet and gentle chemistry that helps Marlo understand her life better, as well as what Tully is going through. Cause after all, it wasn’t too long ago that Marlo was in the same position as Tully, where sky was the limit and life was possible.

It’s easy to think of Tully as what would happen had everyone from Juno grown-up, had more kids, got jobs, and stopped with all of the damn slang. Sure, Diablo Cody still evokes a lot of the same wit from that near-masterpiece, but mostly, it’s dialed-down in honor of more gentleness, where the jokes hit harder and sting even more than ever before. In ways, Tully could have just been another quirk-fest like Juno, but considering that this movie is dealing with much more serious-themes, all including actual adults this time around, it makes sense that not everyone is talking like a hip, witty, sly, and cool-as-hell teen from the final Bush year.

Just goes to show you that we all get older. Some day. Somehow.

But still, Tully is a solid reminder of the kind of magic that director Jason Reitman and Cody were already able to make before with the aforementioned Juno and the highly underrated Young Adult. In ways, the two help balance the other out; Reitman knows what it’s like to play scenes straight and serious, but whenever Cody’s script has a snarky line to drop, he is able to switch things up sometimes mid-scene. This makes Tully feel like much more of a light-comedy than a flat-out comedy, but it’s a welcome change-of-pace for two people who have always shown that they’re able to take themselves far more seriously than they sometimes let on.

And for Cody, you can tell that Tully hits very close to home, what with herself being a mother and having gone through most of the same issues that Marlo goes through. This makes everything, from the depression, to the bloating, to the laziness, to the general boredom, feel honest and genuine, and not just a chance to poke fun at the possible-realities of giving birth and being a stay-at-home mommy of three. Cody seems to not just appreciate and love being a mom and all of the life-long benefits that come with it, but also realizes that it can be a bit of a bitch too, making the process all the more emotional, yet by the same token, rewarding.

But even so, everything about Tully comes down to the final-act and for me, it just didn’t work.

I can’t tell you why, really, but mostly, it depends on a narrative-choice that the movie didn’t need to make and more importantly, is already too obvious from the very start. Once again, can’t say why, but it gives Tully a far more magical and almost surreal-tone, and almost takes away from the rest of the movie. It doesn’t thankfully, as it still allows for Charlize Theron, who practically let herself go for this role, and Mackenzie Davis, to still be charming and lovely together, even when it’s always a mystery where their relationship will go and what will they do for one another. It’s why even despite the final-act blow-up, it still gets plenty of brownie-points.

Just not as much as I would have liked.

Consensus: Charming, sweet and silly, Tully remains a heartfelt and honest ode to motherhood, even when it seems to get its own narrative a little mixed-up towards the end.