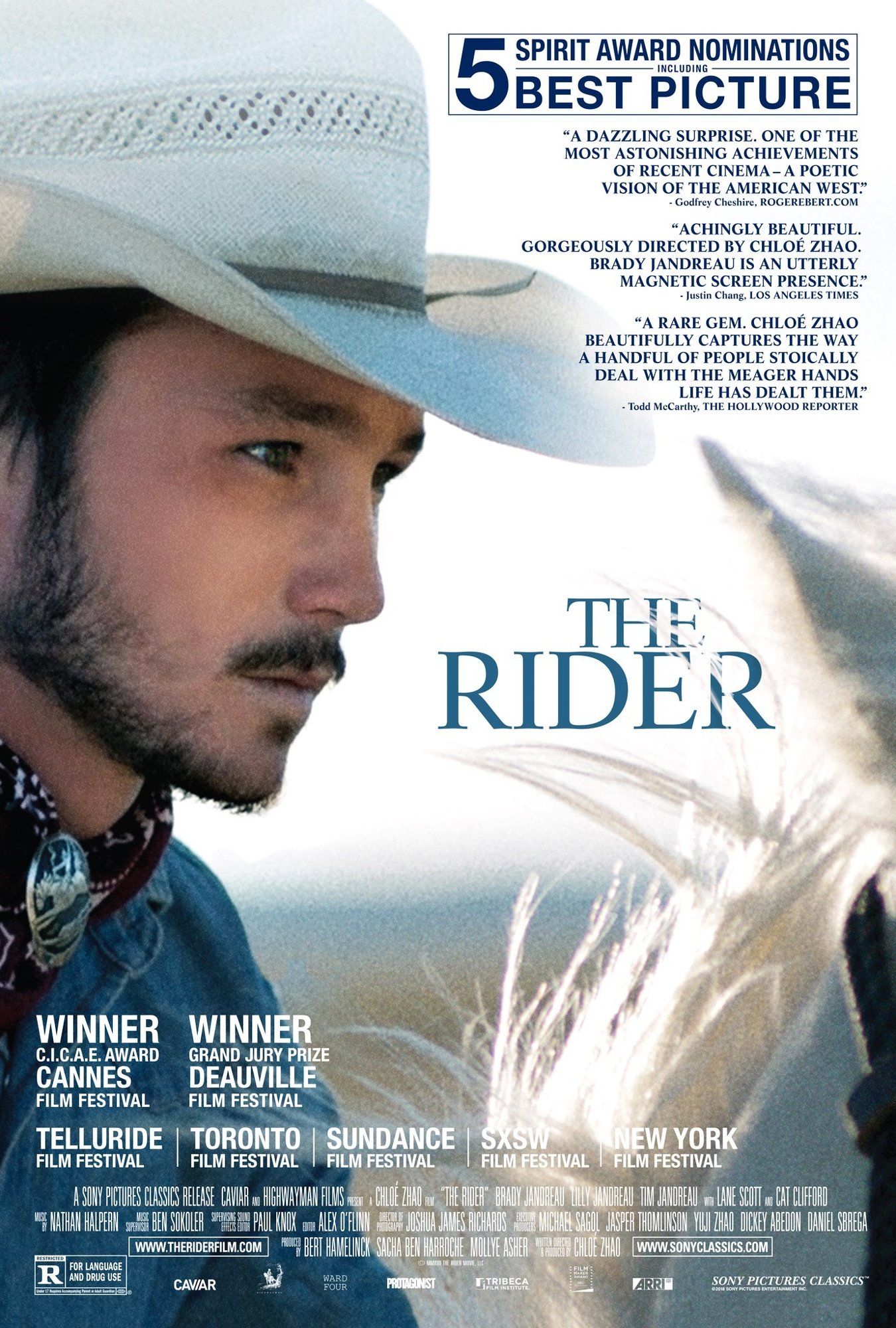 Save a horse, ride a cowboy. As long as that cowboy is willing, that is.

Brady (Brady Jandreau) is a former rodeo star who, after suffering a near-fatal head-injury, has had to step away from the rodeo world and focus on the rest of his life, career, and most especially of all, his family. His dad (Tim Jandreau) and him don’t really get along, and he and his sister (Lilly Jandreau), do, despite the fact that she has some small difficulty navigating through life with Asperger’s Syndrome. But mostly, the family just gets by with what little that they have, no matter how hard it is. And for Brady, that’s a real struggle, as he doesn’t really know what he wants to do with his life, now that it’s all been shaken-up and taken from him. Should he get a real job, like a real person and suffer real consequences of said real job? Or, should he just go on back to the riding-world and see what happens with his head-injury?

The Rider is one of the more unique films I’ve seen in quite some time, especially the more that I continue to think about it. Writer/director Chloé Zhao actually cast these real-people, to play somewhat fictionalized versions of themselves, almost to the point of where you can’t really tell when the film begins and ends. There’s this odd feeling of just being plopped-down in the middle of these people’s lives, watching as they live their lives, struggle, and do whatever they can to get by. In a way, it’s like a documentary, that also happens to be scripted and somewhat more narrative-based, but it’s still a gripping watch because you never know when the fiction begins and the reality ends.

Or if the reality does ever end.

But most of all, the Rider is a beautiful film, both on the inside and the out. As expected, it’s being compared a lot to Terence Malick, mostly due to its dreamy, languid-pace where there are swooping landscape shots of the beautiful fields, sky, ranches, etc. that surround these characters. But it’s also much more than beautiful visuals; there’s also this sad, honest heartbeat to the film about this guy and this family who are just doing whatever they can to get by, no matter how rough it may be. There’s also this depressing notion about how in life, when your mind has been so dedicated to one idea, one dream and you stick to to said dream, only to have to have that ripped-away from you, what do you do next?

For Brady, that dream was riding and it’s easy to relate to the guy when the one thing he’s almost perfect at, is taken away from him. Call it silly, call it insane, and call it just downright “redneck”, but riding means something to Brady and when you see him grab a hold of an unhinged horse, settle it down, and ride it, it all makes sense. This is what he was born to do, it’s all he knows in life, and most importantly, he loves it. Why shouldn’t someone like Brady be able to do what he wants to do, so long as he’s not hurting anyone in the process?

But like I said, Zhao’s direction here is great because even with this cast full of nonprofessionals, she somehow finds a subtle beauty in the way that they move about their lives and interact with one another. Brady especially seems like he may be destined for the screen, with some scenes that seem so emotionally upsetting and raw, it’s difficult not to get choked up by them, because you’re never too sure if he’s acting, or just letting it all out for the whole world to see. That’s how a lot of the Rider is, which makes it feel like the rare beast of a movie that can either be classified as a “documentary”, or a “drama”, and guess what, it still works, either way. May be difficult to describe to friends at dinner-parties, but hey, that just makes it all the more appealing.

Consensus: Beautiful, small, languid, and most especially, honest about life, the Rider is an interesting hybrid between narrative and documentary, but is altogether a compelling piece.