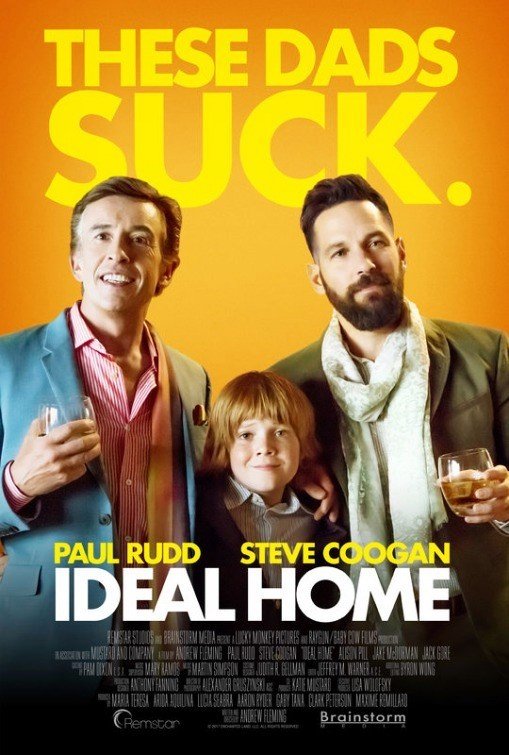 Paul (Paul Rudd) and Erasmus (Steve Coogan) have been together for quite some time and it’s beginning to show. Sure, they bicker a lot, but there’s also a genuine love and support for the other and the extravagant life that they live and are able to advertise to the whole world around them. But their whole life gets turned upside down when it turns out that Erasmus has a grandson he never knew about. And to make matters worse, the grandson, Bill (Jack Gore), has to live with them for a short while because his dad is locked-up. The two aren’t so entirely happy about this situation but they decide to stick with it and see what happens next, leading them to not only enjoy Bill’s company, but come close to wanting to adopt him. However, with Bill’s real-life dad still out there and the world still not being entirely accepting of gay-couples, it seems that the task continues to get more and more impossible with each and every day.

From the outside looking in, Ideal Home looks like crap. Sure, it’s got a solid cast and an even more solid writer-director (Andrew Fleming), but the premise is sitcom-y, the day-and-release didn’t help, and that poster is just awful. It feels as if someone didn’t put enough thought and attention into this thing, yet for some reason, was able to get two of the most gifted comedy-actors to work for it.

Yet, somehow, Ideal Home ends up working quite well.

If there’s anything that works well for Ideal Home, it’s that it’s actually quite funny and goes above and beyond its silly premise. The movie makes fun of gay-stereotypes, while also reinforcing them a bit by showing an outside world that doesn’t quite know how to accept a gay-couple as open and as in-love as Paul and Erasmus. The movie never gets nearly as dark and as deep with its social-commentary, but it does show a glimpse into a world that’s still wrapping its head and mind around two people of the same gender falling in love, getting married, and not hiding it any longer, while also still being able to make fun of everything else.

Speaking of Paul and Erasmus, they’re mostly the heart and soul of Ideal Home and put it as a step above most comedies. For one, Rudd and Coogan have great chemistry, making it seem like these two not only do genuinely love each other, but also couldn’t be without the other. Coogan’s Erasmus is a lot more on the flamboyant side, whereas Rudd’s Paul is more subtle and laid-back, giving them a ying-and-yang feel that not only works for their relationship, but also a lot of the comedy that comes out of them. They feel like an honest couple, gay or not, and rise about stereotypes that we too often see in comedies – the overly-sensitive, kitschy-type that’s almost like a parody of the Queer Eye guys.

And yeah, it also helps that Fleming cares about these characters and what happens to them.

Sure, it’s a comedy through and through, but it’s one with heart. Jack Gore is a fine addition as Bill, because he’s never annoying and genuinely feels like a kid, trying to navigate throughout the world and understand just what it is. While Ideal Home never gets too serious or preachy (until the end-credits), it has an honest message about how loving couple, same-sex or not, should a raise a child if they want and are perfectly up to the task. And with gay-marriage always hanging in the balance with most states, I think it’s important that we see a movie such as Ideal Home to remind us that these couples do exist and aren’t just made for the straight-crowd.

And it’s also really funny to watch Steve Coogan and Paul Rudd hump one another.

Consensus: Sweet, funny and surprisingly heartfelt, Ideal Home is a comedy that works at being funny, but also thoughtful and reminds us of the importance of family-values, no matter how twisted they get.