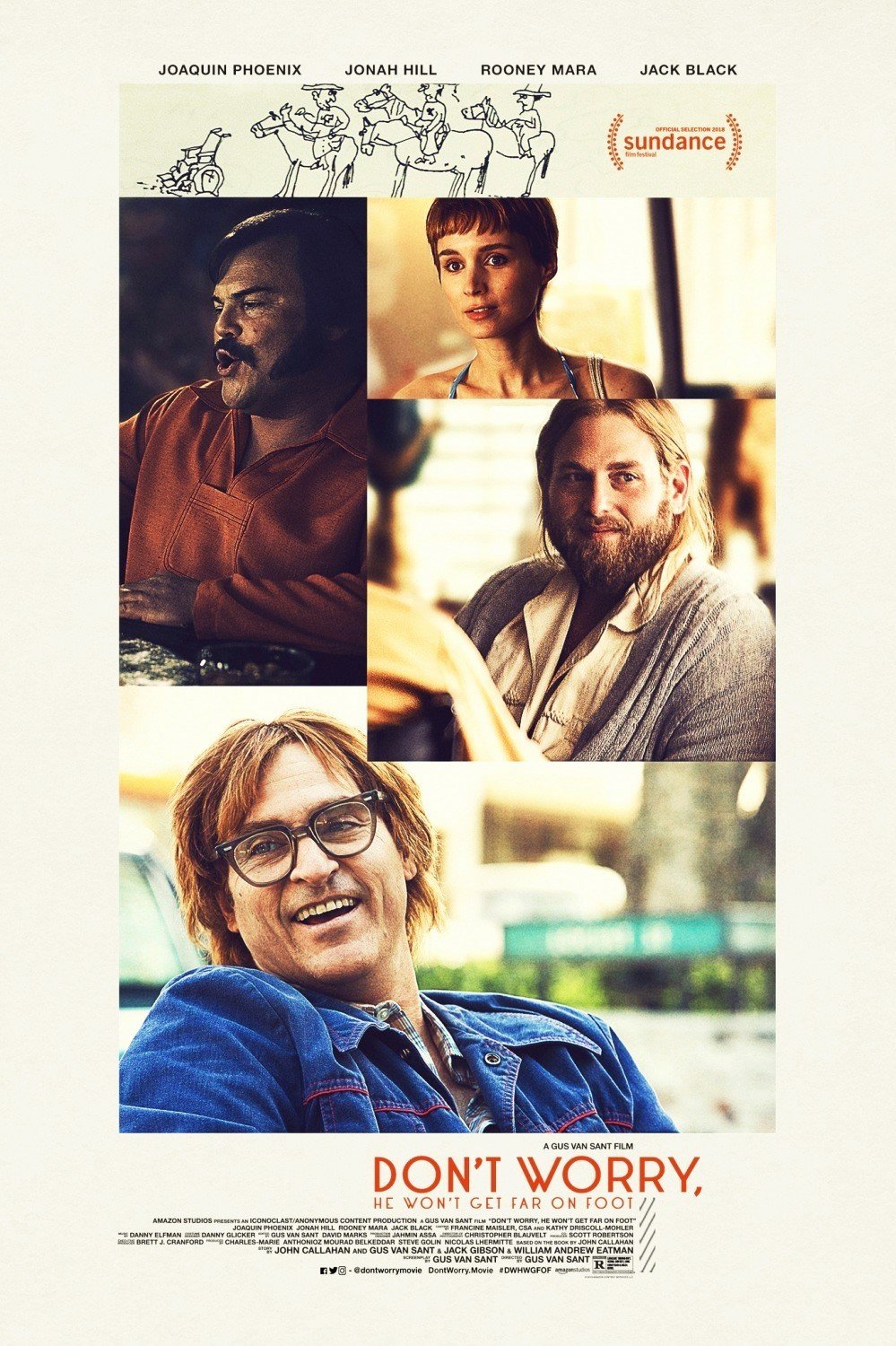 John Callahan (Joaquin Phoenix) had a pretty good life going for him, when all he did was drink and party. Then, he was almost killed in a car-accident – an accident that left him paralyzed from the waist-down. And what caused this accident? Well, drinking and driving of course! So obviously, Callahan has to do what he can to seek some sort of help to not just get him away from drinking, but also get his life back on-track and for him to figure out what his real purpose is. It what leads him to meeting Donnie (Jonah Hill), a spiritual-adviser who wants Callahan to find his inner-peace and be happy with the life he has. He also meets Annu (Rooney Mara), a Swedish caretaker who takes a liking to him immediately, and he to her. And in the meantime, John fully realizes his love and adoration for drawing humorous comic-strips, some of which gain him all sorts of notice and controversy.

Don’t Worry, He Won’t Get Far On Foot is one of Gus Van Sant’s more conventional, somewhat crowd-pleasing movies, yet it never comes off as too gooey or sappy. Most of the time, the movie deals in hard-truths about drinking, love, sex, faith, and most of all, life, which I guess sounds corny as is, but it surprisingly works well because Van Sant never forgets about what makes this movie pop the most: John Callahan himself.

Or should I say Joaquin Phoenix in, yet again, another great role.

What works best for Phoenix here is that we do get to see Callahan in many different shades of light, where we don’t always know if he’s a good person, or a crappy one. He’s somewhere in between, because while we feel sorry for him and the situation he’s thrown into, he’s also not the nicest, or even most polite guy in any room. He’s always got something to say, something to take offense of, and usually, with a drink in his hand. He’s the kind of guy who’s fascinating to watch, even if he’s not always that fun to be around, but Phoenix is so good in the role that you end up cheering him on anyway.

Same goes for Jonah Hill as Donnie, a spiritual guru who feels like he’s going to be a cartoon at the very beginning, but by the end, is almost more well-rounded than Callahan himself. Hill is great with this character because he downplays a lot of his weird mannerisms and quirks with total subtlety, never giving you the impression of if this guy’s the real deal, or full of total b.s. And sure, even if she’s a type, Rooney Mara shows up as Callahan’s love-interest and together, the two have a sweet chemistry.

And oh yeah, Jack Black steals the show. I’ll just leave it at that.

But mostly, Don’t Worry, He Won’t Get Far On Foot works best because it doesn’t always take itself too seriously. When it does, it can be a bit of a drag – there’s only so many times where I can listen in-on conversations about “finding one’s faith” and quoting scripture-verses – but most of the time, it’s frank and honest humor that keeps this thing going. And that’s pretty much the whole point of Callahan’s comic-strips; they aren’t meant to really be deep-thinkers, but a nice bit of humor from a somewhat twisted guy who thinks that everything around him is, and can be, funny. Which I guess makes sense when you’re stuck to a wheelchair your life, but hey, it only makes life better.

Consensus: Well-acted and funny, Don’t Worry, He Won’t Get Far On Foot works as a crowd-pleasing biopic of a person we don’t always love, but can sympathize with and understand a bit better by the end.