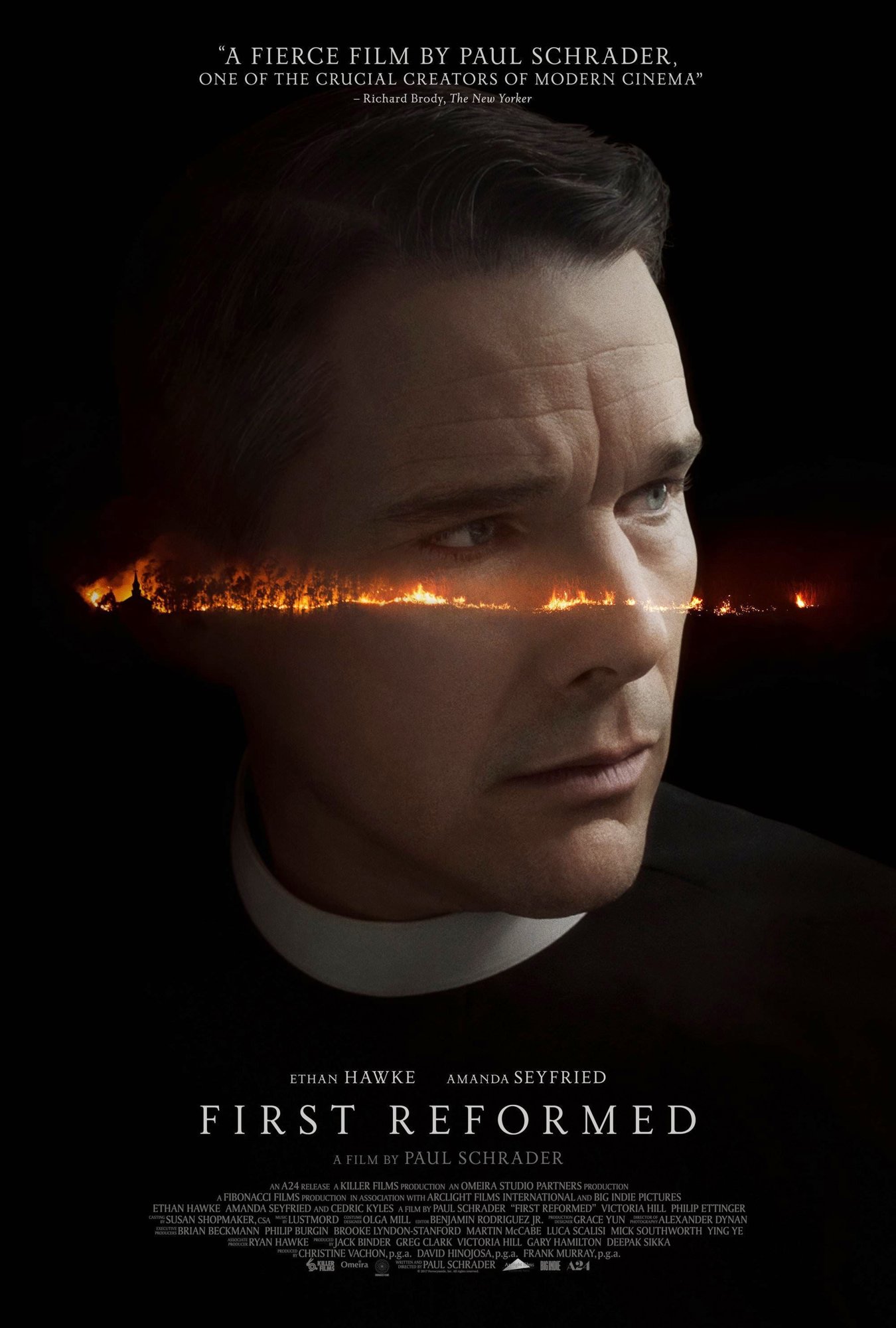 Where was the passage in the Old Testament about hugging trees?

Ernst Toller (Ethan Hawke) is the Reverend of a small church in Upstate New York that has seen its better days. He preaches to a very small audience, he leads countless tours about the historical-significance of the church, and is mostly sticking around so that the head Reverend, Pastor Jeffers (Cedric the Entertainer), can get his time to shine and take over. This is fine for Ernst, who has already had a pretty rough life as is, but is finding solace and peace in his later-days. That is, until he meets Mary (Amanda Seyfried) and her husband Michael (Philip Ettinger) – a couple who are expecting a child, yet for some reason, don’t know if they should have it. Why? Well, Michael is a bit of an environmentalist who believes that the world is going to end by the year 2050 and that there’s no reason to bring a child into this world, if all that there is for them is global warming’s disastrous aftermath. After hearing this, Ernst doesn’t know what to believe anymore, putting his faith and his life, on the line.

First Reformed is one of the most emotionally rough and challenging movies of the year and yet, somehow, it’s also the most simple. Writer/director Paul Schrader who, for the last few years hasn’t been his best-self, frames every shot in a normal, almost simplistic style that isn’t overly-flashy, but it also feels perfect for the movie, as it’s one of those small, understated, yet harrowing flicks about problems and people and everything in between. It feels like the kind of movie that Schrader made all of those years ago and it’s crazy to think that in the year 2018, a 72-year-old-man can have his finger on the pulse as much as he does, but he does and it’s a sight to see.

Cause First Reformed is one of those movies that asks the hard questions, without really providing any easy answers. It wonders whether you can stay true-to-God and your faith, yet at the same time, watch as his world crumbles apart due to unnecessary corruption? It also wonders when the moment comes for a person to put their beliefs on-hold and start questioning? It’s a movie that has a lot to say and is probably preaching a whole lot, but somehow, it never comes off as such; Schrader comes very close to ham-handing his go-green message to the audience, yet also shows how this same kind of activism can cause people to go insane, wanting to solve all of the problems in the world without a clue of how to do all of that.

But all of what Schrader does here is stunning, because he never seems like he’s trying too hard. The movie keeps up a certain bit of tension, the more and more we not just learn about Toller, but where his life is heading, what he’s thinking, and the interactions with those he has around him. First Reformed is most definitely a character-study in the finest-form, where we get a compelling, yet ultimately flawed-figure who seems boring and stale, but by the end, becomes round, complex and incredibly sad. It’s hard not to sympathize with a man like Toller who has, for as long as he’s known, has trusted in God’s word to give him the right to his salvation, to give him the answers, and to make him feel safe, but now not know what to feel, think, or do.

And nobody plays the kind of confusion quite like Ethan Hawke, in one of his finest performances to-date.

Surprisingly, this is a very different kind of performance from Hawke; while he’s played serious and stern before, he’s never been as dark or as menacing as he is here. There’s a certain aura of danger to this man who, as we get to know him, feels like he could do anything, at any second, to anyone, just with the drop of a hat. He’s a man we come to love as we get to learn more about him, yet we also fear for him, his morals, and whether or not he’s able to stick to God’s word, or do what may be the right thing to do, in today’s war on the planet. Schrader uses this constant battle between faith-and-activism and it’s fascinating to watch, with Hawke being the middle-man of it all, taking all of the shots, and getting more and more rattled as the film’s tension continues to mount.

And once again, I stress that First Reformed doesn’t seem like it does much to really stay as exciting as it is. Most of the movie is just a constant barrage of long, dry-winded conversations about God, the Earth, past-experiences, and morals, yet somehow, none of it ever feels boring, Schrader always has something to say and even the characters who may feel like their awful human-beings (Michael Gaston’s energy magnate who shows-up about half-way through, for instance), they still feel real and give you a sense that these are real people, not just thought-providers for Schrader to use as points-to-be-made. It’s the kind of movie we so rarely see nowadays, mostly because they’re either full-on message-movies, or without any message at all.

First Reformed‘s message seems to be that we’re all screwed and the best thing to do is hope and maybe even pray that God, if one exists, takes mercy on us all.

And if that doesn’t stick with you, I don’t know what will.

Consensus: Awfully nihilistic and depressing for sure, First Reformed is also a well-acted, thoughtful, smart, and intense exploration of faith and the right thing to do, which aren’t always as connected as they may appear, in Paul Schrader’s eyes, that is.