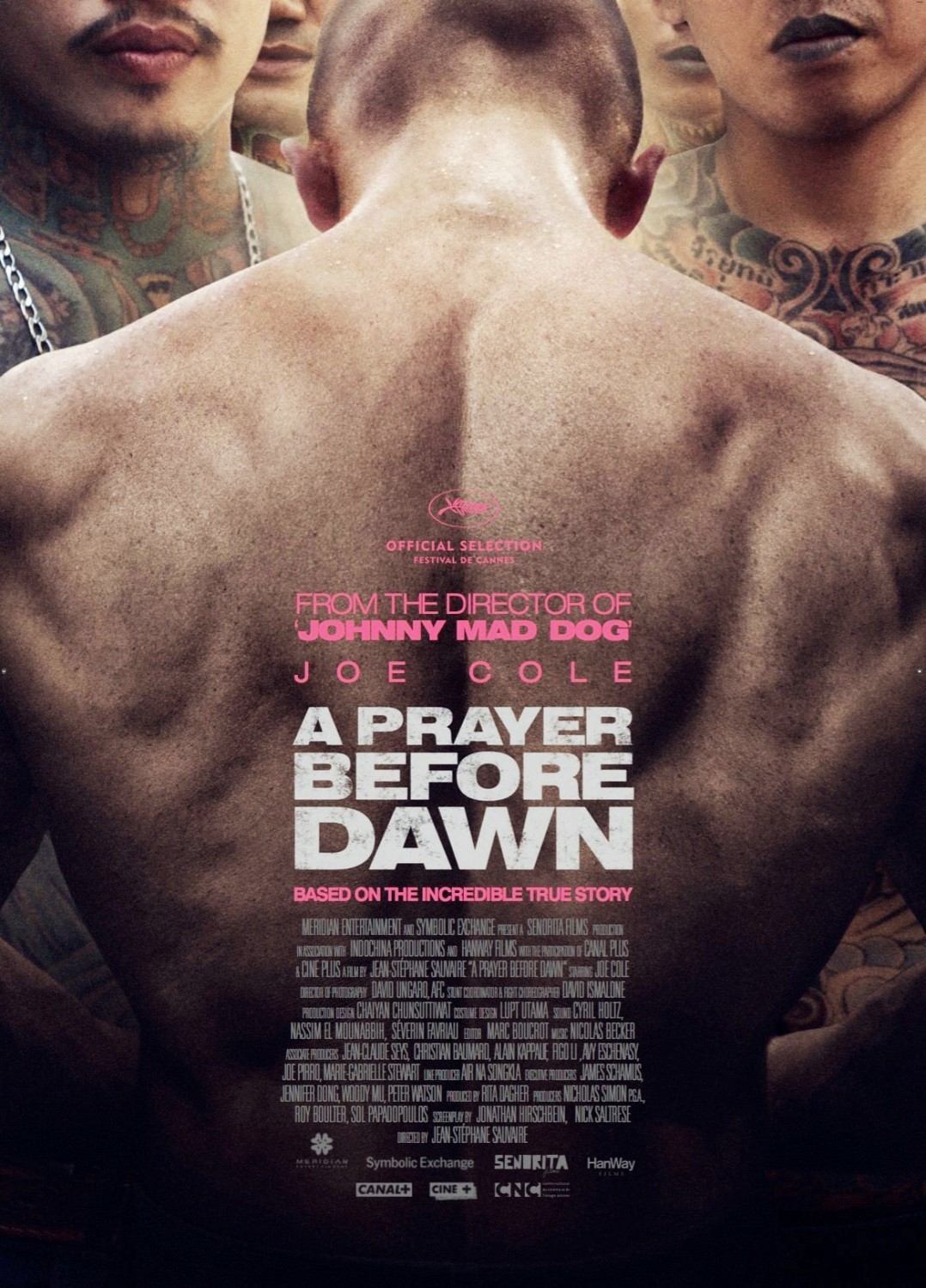 Stay out of prison. Obviously.

Billy Moore (Joe Cole) is a young, brash and ruthless Muay Thai boxer with a bit of a temper. Oh, and also a drug problem. The later leads him to get arrested for holding a bunch of heroin and thrown in a notoriously vicious and deadly Thailand prison. Without much contact on the outside, a real understanding of the language spoken around him, or even much of an understanding just how long he’ll be in, or how he’ll be able to get out, Billy is left to basically fend for himself. This means he has to do a lot of fighting, f***ing, and drugs, while mostly staying away from the boxing. That is, until he realizes that he needs the boxing to survive and stay out of trouble, leading him back to the original path he had planned, where all he does is kick people’s asses and get cheered for it.

There’s a lot in A Prayer Before Dawn that we’ve seen in a lot of other prison movies; there’s the initiation, the confusion, the desperation, the depression, the rape, the drugs, the violence, and oh yeah, the cigarettes. Lots and lots of cigarettes, to be exact. But what separates A Prayer Before Dawn from a lot of those others is that it never takes you out of the prison for a second. As soon as Billy is thrown into the slammer, we stick right by him, watching his every move as he tries to understand just what the hell’s going on, where to go next, and most importantly, how to survive.

Director Jean-Stéphane Sauvaire seems to know that the best way to get us unsettled right away is by just sitting us right there in the action at the bat, making A Prayer Before Dawn feel like the kind of thrill-ride that we can’t bear to sit on, but by the same token, don’t want to get off, or hell, can’t get off. It’s the kind of prison movie that reminds you the simple and obvious fact that prison is hell and you’d be smart to avoid it at all costs, no matter where you are, or what you are doing in life.

And A Prayer Before Dawn never lets you forget about this. It’s brutal, unflinching, mean, gritty, raw, dirty, and downright disturbing at times, but hey, that’s pretty much the point. It’s all based on a true story by the real Billy Moore himself and there’s a certain air of authenticity that helps allow this to work, even when it shouldn’t; the fact that it was filmed inside of an actual Thailand prison probably helped matters, too. But really, it’s a prison movie that feels fresh and invigorating, even if it doesn’t do much to reinvent the wheel on what we’ve seen driven before. All it really needs is a certain level of energy and grime to get by, which somehow, it does.

Sauvaire seems to know that never taking its camera off of our protagonist, especially when he’s trapped in this hell-hole, makes us feel trapped in the same way. We have no way of getting out of this alive and because we’re watching Billy trapped, without much of a clue of what’s going, or what’s being said (English subtitles are used sparingly here), we can’t help but feel the same level of distress and tension. Joe Cole does a great job of not only capturing the rough and tough side of Moore, who literally looks like he’s a jack-hammer about ready to explode in every scene, but also show us the softer, quieter moments where he’s out of his league and absolutely, positively and totally scared, as well as anyone would be in his situation. We feel bad for Moore as is, regardless of his choices that landed him in prison, and watching him as he navigates just how the hell he ended up here and how to get out, makes A Prayer Before Dawn better than most other prison flicks.

As well as nastier and hard-to-forget.

Consensus: Though its conventional when compared to other prison flicks, A Prayer Before Dawn still remains a brutally mean and repulsive flick that grabs you right from the very start and hardly lets go by the time the credits roll around.