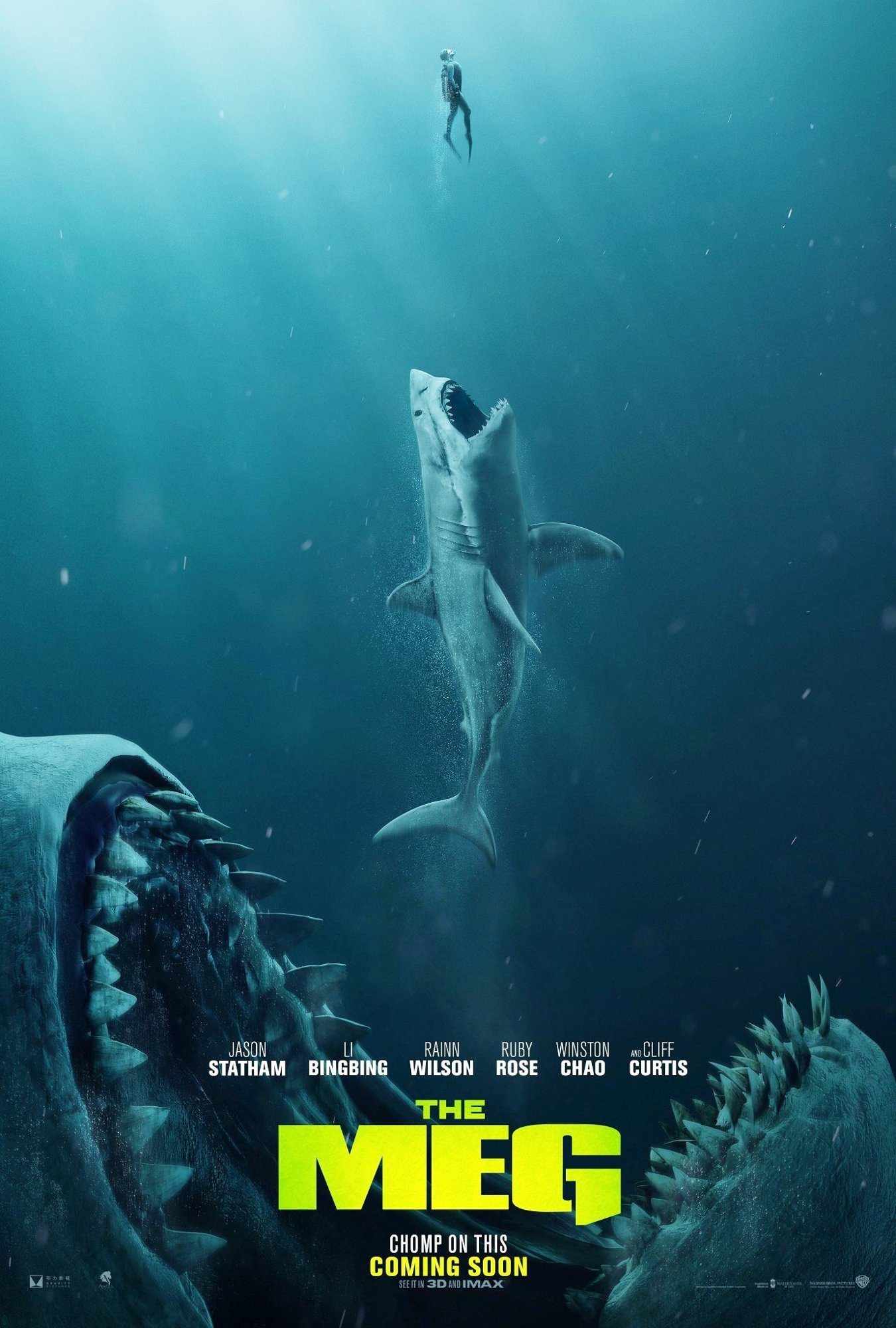 Tell me why people love Shark Week so much again?

A massive creature of epic proportions attacks a deep-sea submersible, leaving it disabled and trapping the crew at the bottom of the Pacific Ocean. No one knows what’s really down there, nor do they know the best cause of action just yet, but with time continuing to run out, rescue diver Jonas Taylor (Jason Statham) is called upon to save the day. Which is going to be a problem because Jonas, after having saved only a medium-percentage of his last crew, went into exile, drinking and sleeping his days away. Now, he’s back in the water and ready to save the crew. But then, he finds out that he may have to save the ocean itself when a 75-foot-long prehistoric shark known as the Megalodon, comes back to life and wreaks havoc on all those who stand in its way.

All of the advertising for the Meg has been so tongue-in-cheek (“teeth-in-cheek”, if you will), silly, wacky, and very meta, promising a very similar movie. Unfortunately, that’s not exactly what we get. Instead of getting a very silly, over-the-top, and knowing movie (like, I don’t know, say Piranha 3D), it’s much more serious, dramatic, and not nearly as in on the joke as you would have hoped, or were promised.

Does that still make it fun? Yeah, sort of. However, there’s a clear distinction between being “silly fun” and just “fun”, and the Meg walks a fine line between the two. It’s never sure if it wants to be overtly silly, nor does it ever know whether it wants to be drop-dead serious and takes it premise to heart; director Jon Turteltaub can handle both, but even he feels confused here, not knowing when to drop the jokes and play for real this time, nor does he know quite when to just get as serious as a Jaws.

So yeah, it’s a pretty middling summer affair, to say the least. Perfect for the dog days of summer and probably perfect to bring your kid to, what with it being PG-13 and all.

And honestly, that may be a lot of people’s problems, but for me, not really. Sure, is it weird watching a movie in which a lot of sea-creatures and humans are killed, maimed, and devoured, without their being any blood, or sign of gore? I mean yes, but at the same time, I wasn’t going into the Meg expecting an absolute gore-hound – just a fun, sometimes exciting movie that knows its audience and doesn’t really need to worry about how many ketchup-packets it uses.

It also doesn’t need to worry about giving its cast meaty-material to work with because well, they’re all pros here and they’re having a great time. Jason Statham is, as per usual, kicking ass, taking names, and being absolutely charming while doing so; Li BingBing shows up as an architect and they surprisingly have some age-appropriate chemistry; Rainn Wilson is in the movie that should have been crazy and wacky, as the billionaire who owns the sea-facility; and Ruby Rose, Cliff Curtis, Page Kennedy, and many others show up to be funny, somewhat silly, and oh yeah, cash in that paycheck. Which there’s nothing wrong with a silly movie like the Meg – sometimes a little fun along the way is all you need.

Next time, though, go full-on silly. It doesn’t hurt to do so.

Consensus: Not nearly as goofy as you’d hope, nor as knowing as the advertising would have you expect, the Meg still allows there to be some fun chills and thrills, even when it seems to never know what it’s trying to be.