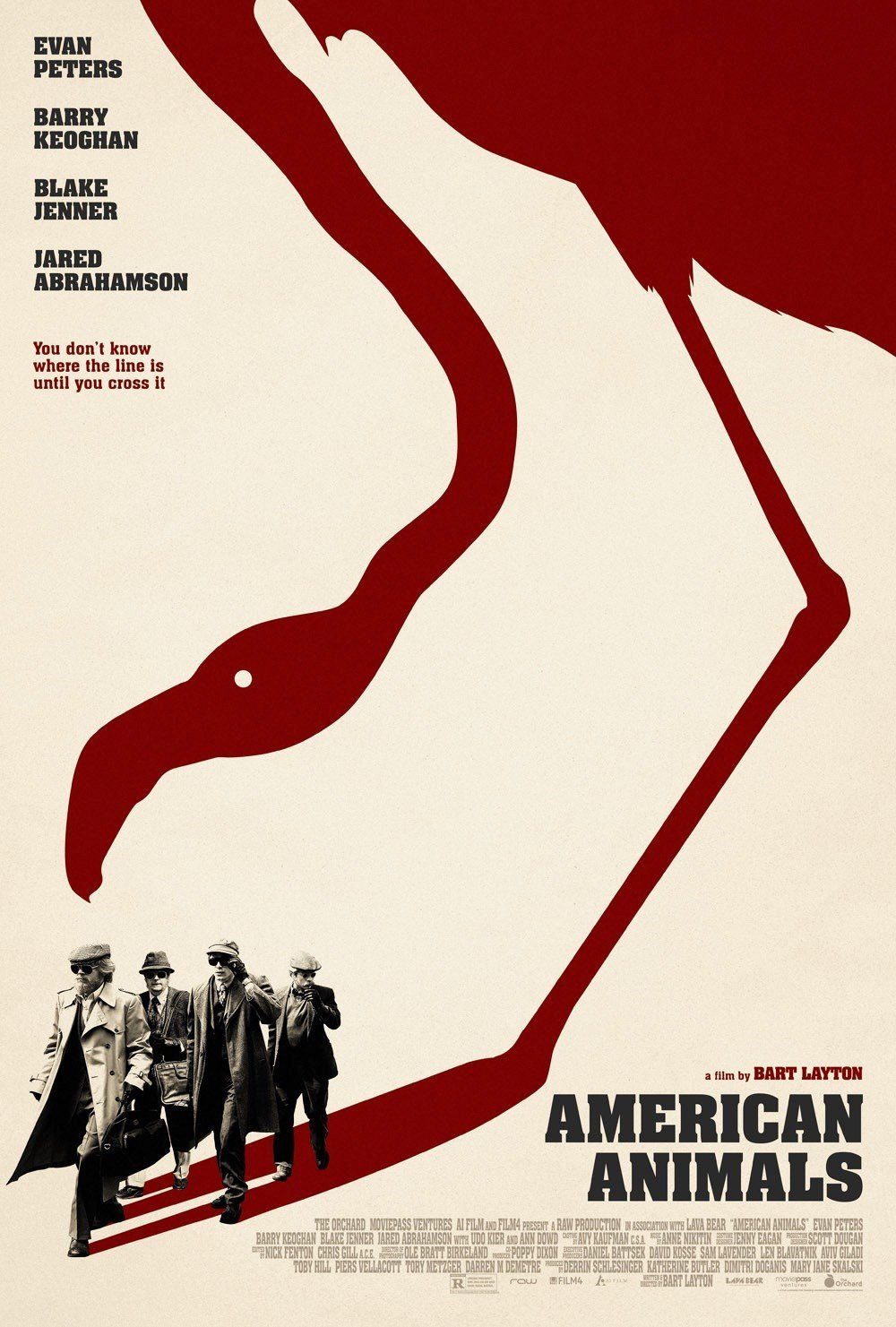 Spencer Reinhard (Barry Keoghan), Warren Lipka (Evan Peters), Eric Borsuk (Jared Abrahamson) and Chas Allen (Blake Jenner) are four friends who live an ordinary existence in Kentucky and they sort of hate it. Mostly, it’s Lipka who has an utter disdain for the ordinary and plain lives that they live and he wants to do something that will not only be wild and crazy, but dare I say it, memorable. That’s why, after a trip to Translyvania University, he gets this crazy idea: Steal the rare books from the library on the black-market and make tons and tons of money. Why? Well, for one, no one’s really thought of it and two, because why the hell not? Everybody basically falls in line for this once-in-a-lifetime heist, however, as the plan actually gets going and comes to fruition, they realize that they may be way in over their heads and it will alter how the rest of their lives play out.

American Animals is an interesting hybrid of a movie because it combines the documentary and natural story-telling in such an interesting manner, that it makes the actual true story that much more compelling. The truth is that it’s a pretty standard tale of kids-gone-bad and committing an odd, yet somewhat interesting heist and that’s about it. The “why” of it all is vaguely interesting, but what writer/director Bart Layton does here, as he did with the Imposter not too long ago, is that he blends the fact and the fiction to where we’re not always sure what we’re seeing is the truth, or what’s just made-up for the sake of exciting storytelling.

Why Layton decides to make us think of what’s real and what isn’t, doesn’t really matter because this story isn’t totally about that; it’s much more about why these kids from pretty sheltered and normal lives, decided to actually rob this library in the first place. It also helps that having the real-life subjects interviewed here and, occasionally, pop-up next to their movie counterparts, help allow for this story to take on a much more believable strand than you’d expect. As is usually the case with the dramatic re-tellings, things can get a little too wacky and crazy to be believable (even if they really are), but actually having the subjects sit there, in front of the camera, and tell us what we’re seeing is the absolute truth (for the most part), works and allows for American Animals to be much better and more interesting than it had any right of being.

Does that make it a great movie? Meh, not really. But it helps make it a step above most other crime-thrillers based on true stories.

But American Animals also actually works in today’s day and age, where it seems like every crime ever, is getting its own documentary series. Whereas this could have easily been one of those, Layton makes it so that he basically kills two birds with one stone – both the documentary where we get all of the facts and info, and the rest where we get all of the fun and excitement of what really transpired. And yes, in that sense, there is a lot of energy to American Animals that makes it a thrill-ride, even if we get a decent idea of what happens to these guys when all is said and done. Then again though, what happens isn’t really the point, but how it came about in the first place, which is why it sometimes feels like Layton is using his style-choice as a way to mask that this story is as ordinary as its subjects’ lives.

Which is why it’s totally hard to care for any of these characters, as much as the performers may try their darndest. Peters plays a crazed and hyper-active loon, again; Keoghan is fine as a relatively boring everyman; Jenner has some interesting bits and pieces as Chas, the one with the most ambition; and Abrahamson just sweats a lot. They’re all fine and nothing against them and their performances, but there does come a point where there’s only so much they can do; if the material isn’t rich or juicy enough, sometimes, there’s just nothing you can do.

And that’s what you have in the case of American Animals: It’s smart, zippy, and fun, but not altogether bright or really all that deep.

Hey, sort of like its protagonists! So maybe that’s the rub?!?

Consensus: American Animals proves to be a rather exciting and thrilling piece of crime-thriller, with a real-life twist, but also doesn’t have much to dig deep into, leaving it a very hollow experience.