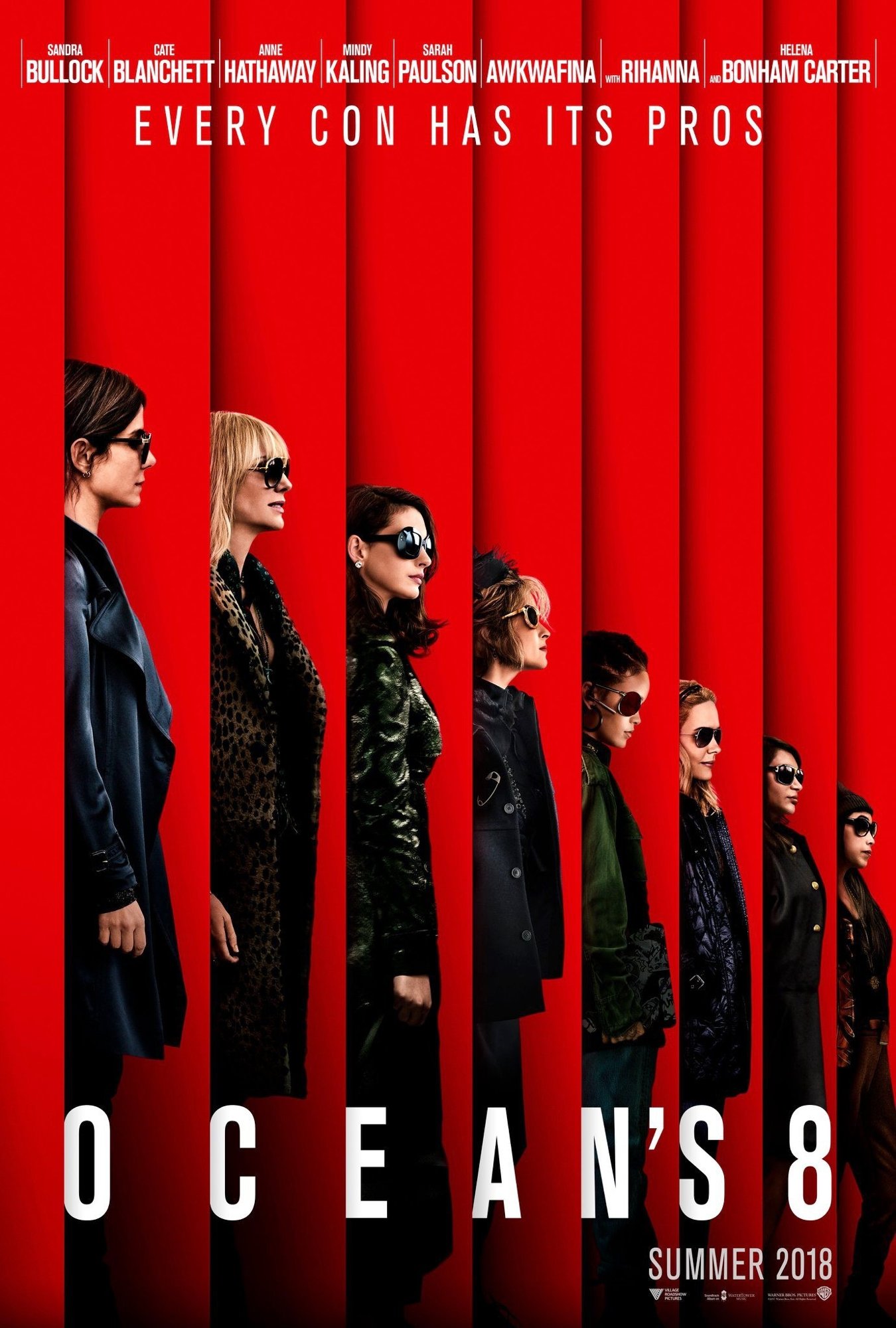 As soon as she gets released from the clink, the first thing Debbie Ocean (Sandra Bullock) does is go back to her old bag of tricks. She starts stealing high-end fashion, sleeping in random hotel rooms, and oh yeah, fooling everyone around her about who she really is. After all, as the sister of the notorious and apparently, deceased Danny Ocean, she’s got something of a reputation, however tainted that may be. But she’s not too concerned with that now, because she’s got a score to settle with her ex-boyfriend (Richard Armitage), who also dimed her out to the cops all of those years ago and is to blame for her landing in the smaller. So, Debbie calls up some friends, new and old, to take him down at the biggest, grandest stage of them all: the Met Ball.

Ocean’s 8, for awhile at least, seemed like something of a pipe-dream: Get a bunch of the best, hottest and brightest actresses working today, have them take over what has been seen as a boys club, and do what stars like Clooney, Pitt, and Damon did in the last trilogy. In 2018, it seemed about time that a female-led reboot happened and finally, with Ocean’s 8, we got it.

So why am I not more hyper about it? Is it because it doesn’t live-up to the expectations of Ocean’s 11 and/or 13, and is a lot more like 12? Is it because I secretly hate women and don’t believe that they can do what guys can do? Is it because I missed guys like Pitt, Damon, Clooney, and most importantly, Bernie Mac, having a blast and doing what they do best with the snappy and quick material? Or, is it because the movie is so pleased with itself and the fact that it’s considered “cool”, that it doesn’t ever fully get off the ground to become, you know, a total Ocean’s movie?

Yeah, I’d say a bit of that last option.

And it’s weird because Ocean’s 8 is most definitely an enjoyable piece of entertainment. It’s funny, witty, breezy, and charming enough to where the two-hours go by without you even noticing, but just like the last trilogy, there’s still a weird feeling that there’s something missing. Like, for instance, how you have this huge cast of heavy-hitters, finally in something, together, at last, on the same screen, and able to do whatever the script has for them to do, so why on Earth is most of that time dedicated to these uber-talented ladies looking at screens and walking cool? Why can’t we have a little more development to them than just, I don’t know, “uptight, soccer-mommy”, or “hip and cool urban-hacker”, or even “shady illusionist”?

Hell, even Cate Blanchett who is perhaps one of the greatest actresses working today, or hell, if ever, only gets a few funny lines and spends most of the time wearing her T-Birds leather-jacket and riding her sweet-ass bike. That’s about all she has to do. And it’s not like this ensemble doesn’t give it their all; everyone is trying their best to squeeze some actual life and personality out of this script, but really, they are no match for the sake that it wants to take itself so damn seriously cool, that almost no one can overcome its sheer safeness. The only person who really gets the chance to shine bright like the diamond that she is just so happens to be Anne Hathaway, who happens to be playing an ultra-bratty and cruel starlet who gets what she wants, how she wants it, and when she wants it.

Basically, she’s playing the Anne Hathaway that everyone loved and hated for awhile. And finally, it seems like she’s getting the last laugh.

And come to think of it, so is the rest of Ocean’s 8 cast and crew. Director Gary Ross doesn’t really have to do much but keep the action moving as best as he can, the actors charming and oh yeah, the heist as ridiculous as humanly possible. But that’s what we come to these movies for: Bright, shiny and breezy stars performing even brighter, shinier, and breezier heists. It’s wrong to want more, but sometimes, it’s the only thing that feels right and such is the case with Ocean’s 8.

But hey, give me a few more of these. I’m totally down for that. Screw the haters!

Consensus: What should have been a momentous occasion with the female-led Ocean’s 8, turns into an relatively mediocre, yet still enjoyable breeze that plays in its wheelhouse and barely ever leaves it once.