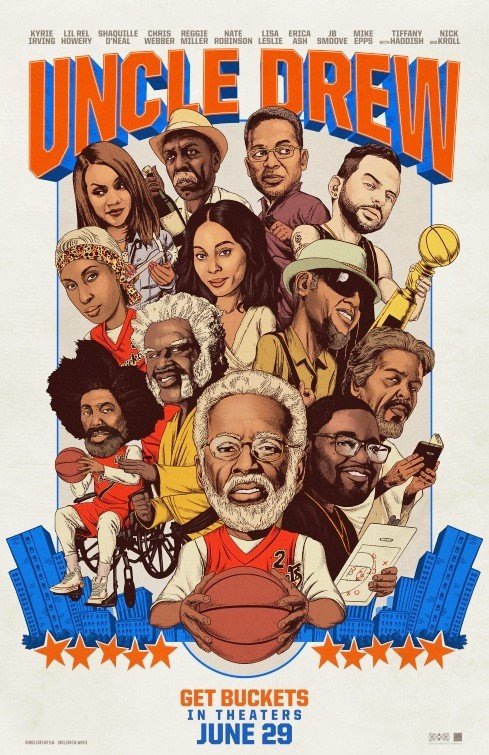 Still waiting on that Oscar-winning, feature-length adaptation of “Wassup?“commercial.

After draining his life savings to enter a team in the Rucker Classic street ball tournament in Harlem, Dax (Lil Rel Howery) is hit hard by the reality that he just doesn’t have it to make on a basketball team, can’t keep his girlfriend (Tiffany Haddish) around, and will have to give his team over to his longtime rival (Nick Kroll). But no matter what, Dax remains as inspired as ever, enlisting help of the man, the myth, and the all-known legend Uncle Drew (Kyrie Irving), who he’s somehow able to bring back on the court one last time. However, there’s a hitch: He’s got to get the old crew back together. And while this may sound like an easy thing to do, getting everyone back together, to settle old issues aside for just one game, is a lot easier said then done.

As you probably know, Uncle Drew is adapted from the Pepsi Max commercials of the same name that featured Kyrie Irving in old-man make-up and prosthetic, showing up randomly on street-hoops, playing pick-up games, and properly schooling every opponent who came his way, where it was unbeknownst to them that they just faced-off against a NBA All-Star. The commercials are funny in a Jackass sort of way, where we enjoy watching public people be shamed for their ignorance, without ever seeming like they could be much more than what they are: Product placements for a soda. Which is why even the thought of an Uncle Drew movie is enough to scare anyone and have them remembering a bright and beautiful time when there were actual original, well thought-out ideas left in Hollywood, and not just million-dollar cash-ins without a heart or soul to spare.

But here’s the rub: Uncle Drew‘s not all that bad.

Is it still absolutely a piece of shameless product-placement? Of course it is, but it knows it is and sort of rolls with it. If anything, it’s a rare opportunity to watch a bunch of funny and talented people joke around with one another, play basketball, and have a good time doing so. Uncle Drew isn’t demanding your hard-earned attention and it sure as hell isn’t ask that you turn your brain on, but it is asking that you at least leave all of the pre-conceived notions about it at the door and check it out anyway. It’s not a perfect movie in the least bit, but it’s an enjoyable one that’s pleasant enough to get past the fact that, once again, it’s ADAPTED FROM A FREAKIN’ COMMERCIAL.

That said, the real joy of Uncle Drew is watching an odd cast of basketball stars, both former and current, and comedians come together and bring something that made it seem like they legitimately enjoyed making together. And it’s weird, too, because you’d think that with a movie so demanding of relatively untrained actors, that they, as well as the movie would be horrible, but they aren’t and it isn’t. Irving is surprisingly capable of being funny and a leading-man, as well as everyone else surrounded by him in the old-people make-up. Even Lil Rel Howry, who doesn’t always get to play the straight-man, seems like he’s even having fun just allowing all of this craziness to happen around him.

And sometimes, that’s all you need: A charming enough cast to get you by.

Most of Uncle Drew is really concerned with wacky shenanigans and hi-jinx that work for a little while, until you realize that there’s hardly a plot, or really a drive in the direction. It’s the kind of movie that if you think about too hard, may totally not work and be more irritating, but the cast and crew do what they can to make you forget about about all of that. It sort of works, but trust me, think once and your experience may be ruined.

Consensus: Regardless of where the idea originally came from, Uncle Drew is a surprisingly pleasant and enjoyable comedy that mostly gets by on the charms of its cast and that’s about it.