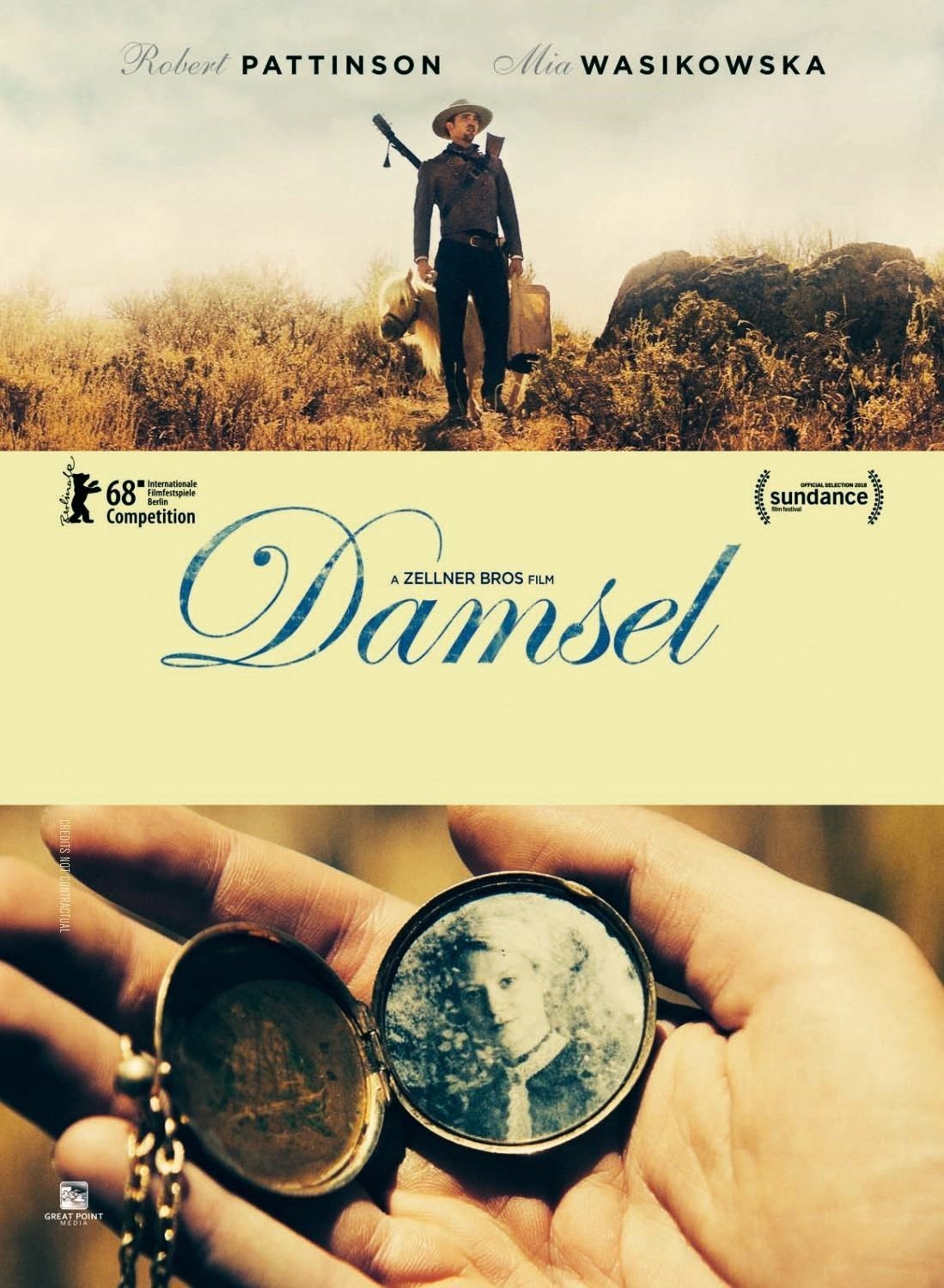 Never trust anyone in the West. Ever.

Samuel Alabaster (Robert Pattinson), an affluent pioneer, ventures across the American frontier to marry the love of his life, Penelope (Mia Wasikowska). But in order to get to her, he’ll need to enlist the help of Parson Henry (David Zellner), a man who has seen and done it all. Together, the two set out on an adventure of sorts, along with Samuel’s little pony Butterscotch, to track down Penelope so that Samuel can propose to her once and for all. The only issue is that Samuel may not be telling the full story about his relationship with Penelope and it may cause the trip to go awfully haywire.

Damsel feels a lot like a Coen Brothers rip-off, which is fitting considering that the Zellner’s last movie – Kumiko – was literally about a person thinking Fargo was a real-life movie. You can tell that the Zellner’s love and appreciate the style that the Coen’s bring to their movies and rather than totally incorporating it, they take the weirder parts and decide to go absolutely nuts with the constant craziness of not knowing what to expect next. It’s worked so far for them, so why stop here with Damsel?

Well, for one, because it doesn’t add a whole lot.

Still, as film-makers, you can tell that the Zellner’s are continuing to grow the more ambitious they get. As a Western taking place in 1870, every single shot of Damsel feels genuinely bright, beautiful, and colorful, as if it’s a painting brought to life. Some may think that it looks too much like an old-timey Hollywood production, but that’s sort of the point; the story and setting itself is conventional, but what takes place within the parameters of both is anything but. It’s beauty on the outside, but dark strangeness somewhere on the inside and it’s what keeps Damsel always worth watching, even when it seems to be losing itself.

Another reason to keep watching is, of course, the trio of leads with David Zellner, Pattinson and Wasikowska. Pattinson is at his most charming, yet alluring as Samuel, making you feel like there’s something off about the guy, but you can never quite put your finger on it; Zellner plays Parson as a sad-sack who may or may not have a darkness to him; and Wasikowska, as per usual, gives us a strong female-presence in the kind of movie that doesn’t always have them around. She’s smart, tough, and just as skilled as the men around her and it makes her a refreshing slice of a relatively conventional pie.

But like I said, Damsel isn’t all that conventional.

If anything, it’s just the kind of movie that takes the formula of a Western, spins it on its head and does whatever the hell else it wants to with it. Sometimes, this creates small bits and pieces of beauty and magic – other times, total and complete aggravation. Aggravation because, honestly, it always seems like the Zellner’s are out there, trying to prove that their the weirdest cats out there, and don’t fully care about following any sort of rules or guidelines on how to make a movie.

And honestly, nor should they. Film wasn’t just made-up to be strictly followed and there’s never anything wrong with a few lawbreakers to shake things up every so often. But there comes a point when the shaking-up becomes a bit bothersome and meandering, which is what happens here with Damsel. It’s goofy and quirky personality has its charms, but there comes a point where you want said goofiness and quirkiness to take a back-seat to other things, like character and plot-development.

To name a few.

Consensus: As odd and beguiling as it may be, Damsel still presents an awfully off-kilter Western that sometimes work and other times, doesn’t.