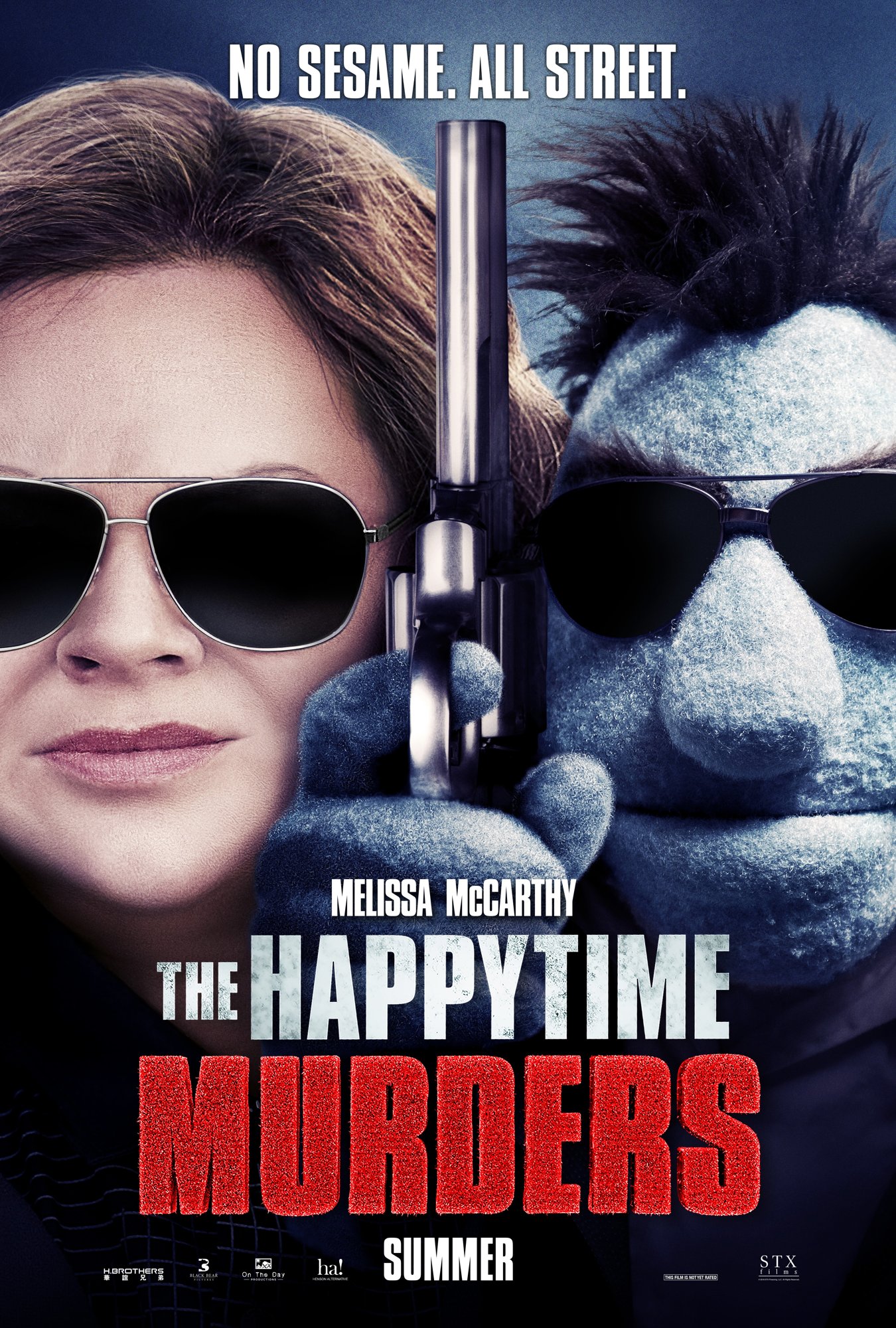 How will the kids ever watch Sesame Street again?!?

It’s present day and humans and puppets are living besides one another. It’s not in total and perfect harmony, but it’s fine enough to where the puppets get treated like second-class citizens and are okay with it, only because that’s how society has mandated it as being. And Phil Phillips (Bill Beretta), already famous for being the city’s first puppet cop and now disgraced and working as a private dick, is investigating a series of murders that all seem to be connected to “The Happytime Gang,” a puppet/human variety show his brother starred on. But in order to totally figure out just what’s happening in this case, he has to reunite with his ex-partner, Edwards (Melissa McCarthy), who still harbors some bad blood for him all of these years later.

Oh, and there’s a lot of puppet-sex, too.

In fact, there’s a lot of puppet-sex, but somehow, that’s not the worst part of the Happytime Murders. If anything, it’s the kind of movie that feels like a missed-opportunity; blending puppetry and realism together, with a no-holds-barred approach, almost feels like an idea too-good-to-be-true. And hell, they even got Brian Henson, son of the famous Jim, to direct, so you’d have to think that whoever signed-off on this, knew what they were doing, getting themselves into, and trusted that the audience would be “in” on the joke, right?

Unfortunately, that’s not what happens with the Happytime Murders.

It’s the kind of movie that has way too much time on its hand for jokes about puppet semen, or puppet-sex, or calling people gay, that it doesn’t really know how to set-up that great of a joke. Poking fun at the idea that these are puppets we’re dealing with here is fine for a couple of lines, but when that becomes the only punch-line you can rely on, then it gets a bit old and, in a way, feels tame. Which is odd to be saying about a movie that’s as raunchy as the Happytime Murders, but somehow, it just never feels like it’s dirty enough, or is simply trying too hard to be overtly dirty, without any real rhyme, reason, or better yet, wit.

And yes, you can make the argument that I’m expecting a little too much from a movie that features puppets banging, drinking, doing drugs, and shooting guns, but not really. These are the kinds of movies that, due to their idea, have already passed the threshold of being ambitious and different, but for some reason, never quite reach the heights that they probably should have. Even the frank conversations about race and profiling, while admirable in a movie that, like I said, features puppets banging, still falls on deaf-ears because it never seems to take itself seriously in the first place.

Which is fine, as long as it was funny. But it wasn’t and that’s the problem.

And it’s a problem, too, when you have people like Melissa McCarthy, Maya Rudolph, Elizabeth Banks, Joel McHale, and plenty others, all showing up and not really having much to do. Even though McCarthy’s movies haven’t always been great, she’s at least the most charming and reliable performance in all of them – here, she never fully comes alive and oddly enough, feels like the straight-man in her own comedy. She has a few bright spots, but they are so few and far between, that it almost doesn’t matter that she’s there.

Or even any of the puppets for all that matter.

Consensus: While no doubt an odd, yet interesting idea, the Happytime Murders never lives up to its ambitions, nor does it ever deliver on the raunch-filled and nasty laughs it seemed to promise.