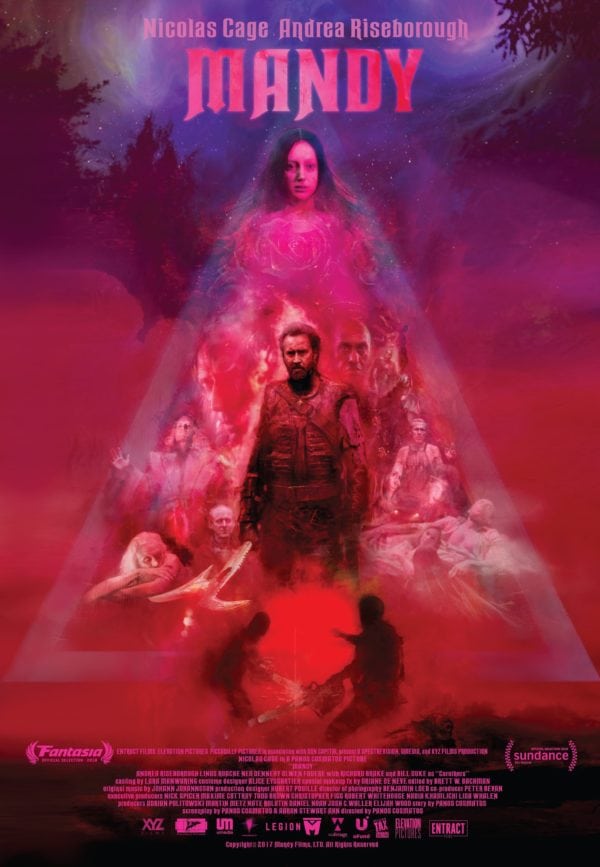 The cults had it coming.

Somewhere in the primal wilderness near the Shadow Mountains, it’s the year 1983, Red Miller (Nicolas Cage) and Mandy Bloom (Andrea Riseborough) live a perfectly quiet and idyllic little life. They separated from practically the rest of the world, but they like that because all they have, really, is each other. But their own peace of heaven gets interrupted one fateful night when a crazy-cult comes through town and kidnaps Mandy, leaving Red to die. However, he doesn’t die and he’s left with a whole lot of rage and plenty of time to track down the cult and extract sweet and swift revenge. The only problem is that there may be more supernatural and dangerous forces at-play.

Then again, it’s Nic Cage and nothing can take him down.

Mandy is the craziest movie of the year and it barely even seems like it’s trying. Whenever I hear somebody coin the term “midnight movie”, I get annoyed because that only means one thing and one thing: It’s made to be enjoyed by a certain person, at a certain time, for certain reasons. I heard a lot of that said about Mandy, but for some reason, I didn’t let it get in the way of the sheer insanity that it is, but once again, it’s not the kind that’s trying too hard to shock and/or have you twisting your head in disbelief.

It does what most midnight movies of its silk don’t do and that’s wear its heart on its sleeve.

Meaning that it’s a kinetic, beautiful, haunting, gruesome, violent, and awe-inspiring vortex-pull in the deepest, darkest and most pitch-black pits of hell, where it seems like nothing, or nobody, is safe from it. Co-writer/director  Panos Cosmatos knows that he’s dealing with some truly brutal stuff here and never lets it feel like we’re in it just for the thrills and chills; we’re here for the visceral experience of not feeling safe and not having the faintest clue of what’s going to happen next. Even the plot, as conventional as it may seem, on-paper, still has some weird tricks up its sleeve that makes you wonder just what the hell was going through Cosmatos mind when he was making this?

And it’s weird for me, too, because I wasn’t the biggest fan of his first film, Beyond the Black Rainbow. To me, that was the definition of style-over-substance – dark, moody, and ridiculously slow, you could almost tell that there was barely a script, but the production-design from the sets to the sound were more than enough to keep your eyes off of it and your mind away from thinking too hard of the plot. Mandy isn’t the polar opposite, but it moves at a solid-pace where it’s constantly building and building, and actually features something resembling a script, with a plot that does interesting things, and characters that, as goofy as they can be, are compelling to watch.

Which brings me to the most important aspect of Mandy: Nic Cage himself.

Since Bad Lieutenant nearly a decade ago, it finally seems like Nic Cage isn’t just slumming himself for a quick and easy paycheck; this time around, he’s actually working with someone who knows a thing or two about creating a character and at the same time, still allowing for Cage to do his usual Cage-y thing. He screams, runs, stares, laughs, snorts, and does practically everything you’d expect from a perfectly gonzo-Cage performance and it’s just a treat to finally see him a movie where he’s not only having fun, but allowing the audience to have the same fun as well.

But surprisingly, it’s Andrea Riseborough and Linus Roache who come close to stealing the show from Cage, as the titular Mandy and the cult-leader, respectively. Riseborough has a very interesting presence about herself here, as well as in plenty of other stuff, where you’re never sure if we can trust her, or love her. Whereas with Roache, he’s just absolutely and totally bonkers, allowing you to despise him, while still also still sort of loving him for being the typical crazed-lunatic we expect from these kinds of movies.

It’s the gift that keeps on giving and yes, I can finally say that I get what a “midnight movie” means.

Consensus: Wild, dangerous, overtly violent, and surprisingly gorgeous from head-to-toe, Mandy is the kind of viscerally entertaining experience you’d wish Nic Cage would constantly make, again and again, but still reminds us what’s so special about him and these kinds of movies, when done perfectly well.