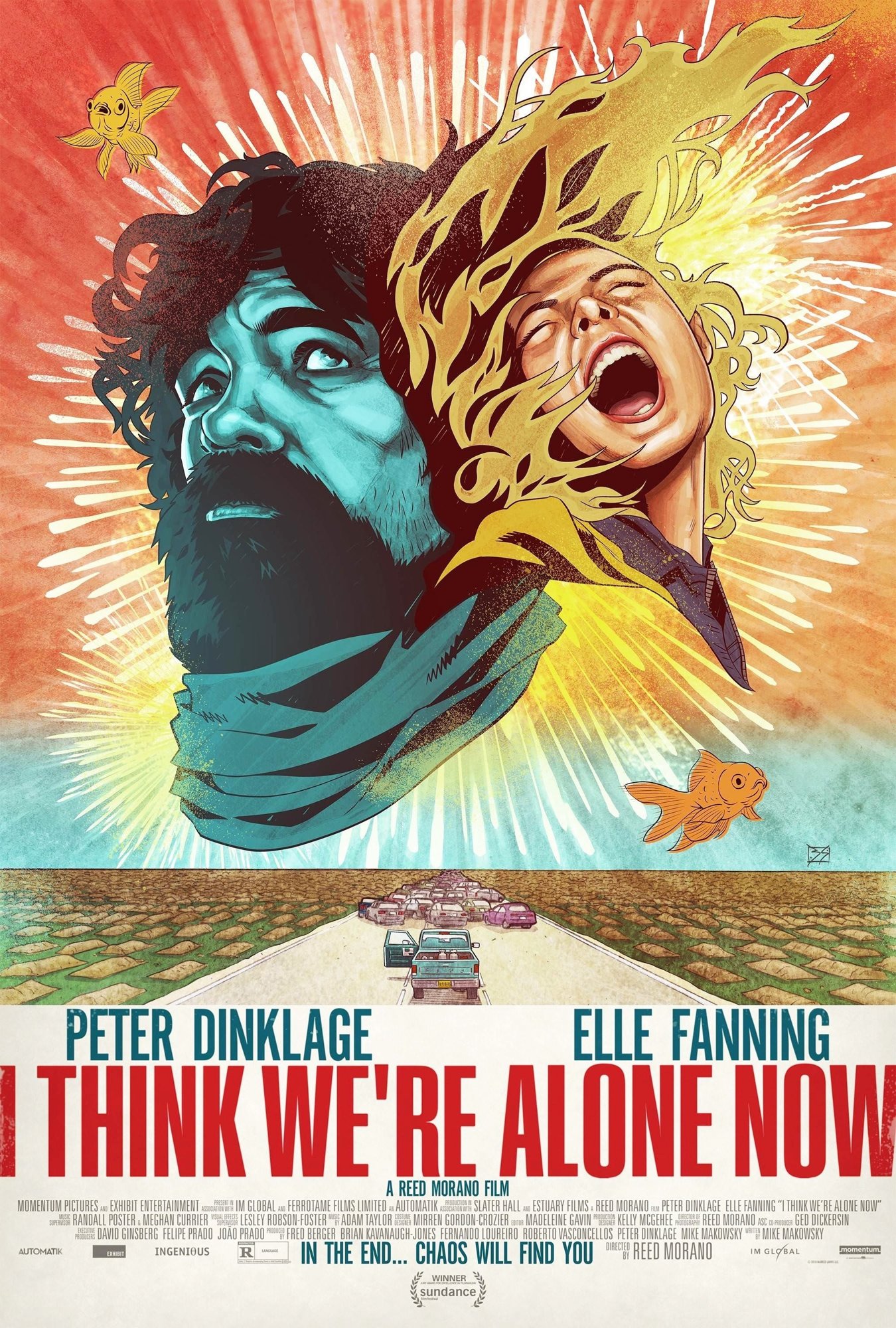 Now I’ll never be able to stop thinking of Tiffany and the apocalypse.

Del (Peter Dinklage) has been living on planet Earth for quite some time, by himself, doing his everyday chores. The human race has been whiped-out through some crazy sickness and without any real connection to the outside world, Del is perfectly fine with the seclusion and most of all, the silence. That all changes when Grace (Elle Fanning), a young, spunky, and rather curious gal comes roaring into his life, proving him wrong at not being the last person on this planet alive. Instead, it’s the two of them and rather than trying to figure out who else is alive and what actually happened, the two decide to see what sort of future they can make, even if it’s just the two of them after all. However, there’s a little secret to Grace, and to this world, that may or may not be a deal-breaker for both of them.

Without saying too much, yes, there is a twist that comes about half-way through I Think We’re Alone Now and I don’t use that as a spoiler, but to prove what a bummer it was, because everything prior was already working. Director Reed Morano has already proven herself to handle post-apocalyptic versions of Earth real well (the Handmaid’s Tale) and she creates a great calm of staggering silence and eeriness; we’re never quite sure just what happened or what the deal is outside of this small suburb of New York, but we’re already drawn in to how dark and sad everything already is that we don’t care. And Mike Makowsky’s script does a solid job of setting up all sorts of avenues, peaks and valleys for this story to go down, without ever seeming like he’s doing the usual conventions that most post-apocalyptic tales fall into.

But then, like I said, the twist comes through and all hope is lost.

The movie gets formulaic, silly, and honestly, uninteresting. It’s what usually happens when you are writing something, literally anything, and you have a great hook, but don’t really know what to do next. Do you continue to go with that hook and find another great one to go on top of that? Or do you just say “screw it” and throw all caution to the wind, expecting the hook is strong enough to savor all of the problems?

Unfortunately, the latter is what happens with I Think We’re Alone Now, a movie that promises a whole lot more by just showing us, rather than telling, until it doesn’t. Once the twist comes around, things are randomly explained (sort of), violence is surprisingly promised, and oh yeah, it just ends. Like just as soon as it’s about to get going back to where it started, nope, it just fades to black.

And it’s a shame, too, because there’s a lot of good with I Think We’re Alone Now. It’s sad, thoughtful, well-acted, and, for a short while at least, an interesting spin on the post-apocalyptic sub-genre, but it falls apart about half-way through. The hook is great, but once again, you sometimes need a bit more.

Consensus: As dark and as eerie as it is, I Think We’re Alone Now runs afoul about halfway through with silly twists and a tonal-shift that promises something different and more conventional.