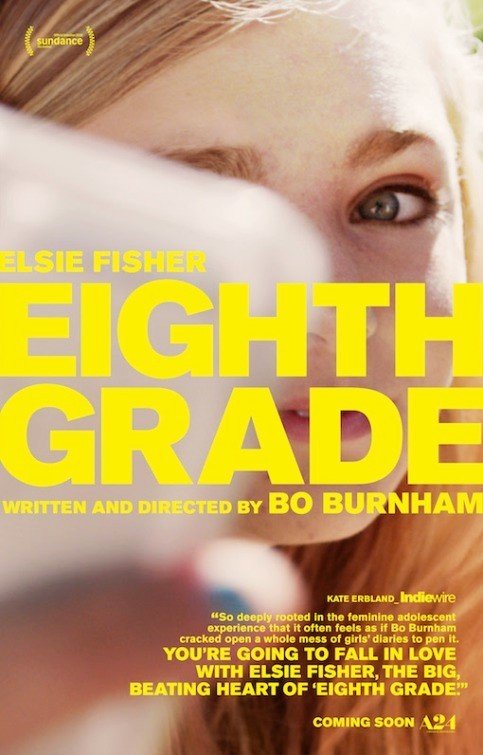 13-year-old Kayla (Elsie Fisher) has had a rough go at this little thing called life so far, but with her final week of eighth grade coming up, she’s finally ready to shake everything off, become more confident and most importantly, achieve all of the little goals she sets out for herself. These goals are also the same ones that she sprouts on and on about on her YouTube page, which barely gets any views, but makes her feel better about herself and creates a nice diversion away from the painfully awkward times of middle-school and hanging out with her dad (Josh Hamilton). But now with high school coming, Kayla’s ready to change her ways, get out of her room, start talking to more people, and hopefully, just hopefully, remembering middle-school as an alright time.

A goal which, we all know, is impossible.

Eighth Grade is one of those rare coming-of-agers that feel as if it was written directly from the point-of-view of an actual eighth-grader. Regardless of the technology, the pop-culture references, or even the slang used, Eighth Grade is a relevant tale for anyone who has ever grown-up, gone to elementary school, and had to go through any of the growing pains that come with both. At times, it’s downright, gut-busting hilarious, whereas other times, it’s painfully cringe-inducing and awkward to sit through, or to bear witness to.

Is this because it’s easy to relate to the most awkward time in a person’s life, especially when it’s being portrayed on the big-screen? Absolutely. But here’s the odd thing about Eighth Grade: It never feels as if it’s trying way too hard to really reach out, grab us by the heart, body, mind, and soul, and make us feel something – it just does that already. It’s the kind of movie that just gets it and while it may definitely be perfect for kids in middle-school to watch – especially those growing up now – it’s probably perfect for anyone to see, because we can all relate to this tale somehow.

And by the way, this is all done by Bo Burnham, a comedian I’ve never been fond of, but have learned to appreciate and respect because he doesn’t go for the easy-laugh. His stand-up bits aren’t set-up-then-punchline and the same could be said for Eighth Grade; the comedy never comes at you straight ahead, but in small, subtle, thought-provoking ways that’s hard to describe, or even write about, but that you just feel. Yes, I know that sounds awfully pretentious, but it makes sense once you’ve seen Eighth Grade, a movie that’s not really a comedy, or a drama.

It’s just a coming-of-ager, through and through.

But it doesn’t feel like your typical one that’s just ripping-off John Hughes (like every Netflix teen-dramedy’s been doing), or so meandering and threadbare that it’s barely even on the screen; it’s the kind that’s quiet and small, yet somehow, still incredibly powerful. Once again, hard to describe, but for a movie that’s about a 13-year-old girl’s final week of middle-school, for a 25-year-old guy to laugh, cringe, smile, and tear-up just a bit at it, means something. It means it’s a winner and another strong-case of what happens when you have smart, effective writing on your hand.

Same goes for when you have an amazing cast on-deck, which with newcomer Elsie Fisher in the lead, you can’t really go wrong. What works best about Fisher’s performance, other than the fact that she’s nevertheless charming and realistic as a young girl, is that she nails a lot of the small, subtle tics that go along with such an introverted character such as this. Burnham has created a fully three-dimensional character and in doing so, is putting a lot of weight on the shoulders on Fisher to handle every little cadence, movement, and mannerism to the utmost perfection and she nails just about every single one. You never feel like she’s acting, or trying too hard, or just the product of two famous-people – she’s an actual thespian who may just be around more and more.

Consensus: Smart, endearing, touching, hilarious, and awfully honest, Eighth Grade is the coming-of-ager that works for just about everyone who sees it and deserves to be required-viewing for anyone growing up and wanting to be their best-selves, as cheesy as that may sound. Gucci!