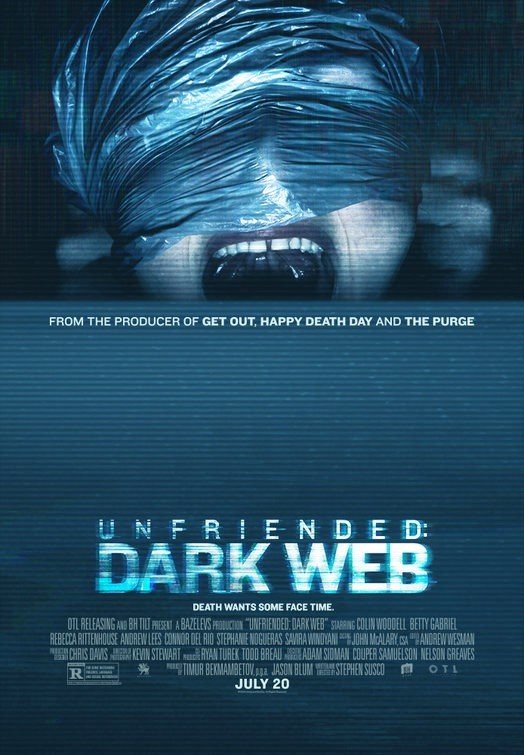 Stay off the web. Dark or not.

After discovering an old laptop at his work, Matias (Colin Woodell) decides to take it home and see what he can do with it. Turns out, there’s a lot. He can talk to his girlfriend, who also happens to be deaf, he can still chat with all of his friends, and most importantly, he can keep up with the rest of the world through social-media. But one night, just when everything seems to be perfectly fine and simple, he begins to get these weird messages about the laptop and whether or not it has damaging stuff on there. More importantly, though, it’s original owner may want it back and will do absolutely anything to get it back – which also means destroying every inch of Matias’ life, whether he knows it’s happening, or not.

Even with the gimmick intact, the original Unfriended was a surprise. It was tense, interesting, and actually seemed to have a little something to say about technology, teens, and how they can use it for both good, as well as bad. It’s another found-footage horror movie in the post-Paranormal Activity world we live in, but it was a solid enough one that it made me forget about the small things and just appreciate that it was small, ridiculously cheap horror movie.

A horror movie which, mind you, was apparently begging for a franchise, right?

Eh, I don’t know. But it doesn’t matter what I know, or don’t know, because Dark Web is here to continue on the Unfriended universe and remind us what worked so well in that film, will only feel slightly less original and fun here. And yeah, that’s pretty much what happens; the formula is still the same, the scares are as jumpy as ever, and the characters, even if it’s hard to really do much with them when all they’re doing is staring at screens, feel thin and cartoonish. Whatever was magic and golden with the first, seems to be lost here, in the sense that some things are switched and changed-up a little bit, but at the end of the day, it’s still the same old dog, with no new tricks, but different ways to show them.

Which makes it easy to see why Dark Web is a bummer in some sense, even though it continues the mystery that this universe somehow has and if anything, that’s more than enough to keep yourself glued, even in its sillier moments. If anything, I think that with the addition of movies that are able to do this kind of storytelling better – like last month’s Searching, which was so good – makes these kinds of movies seem a bit lame in comparison. The only thing that’s saving Unfriended, as a franchise, is that it keeps the door open at the end, for a bigger, brighter, and dreadfully creepy world and future.

Which may or may not be a good thing. Depends on how you already feel about a bunch of young-adults screaming at and looking into their screens all day.

Consensus: Though it spins its narrative around a bit, mostly, Dark Web isn’t all that original and feels a tad too much like a retread of the first, even with the occasional scare and jump every so often.