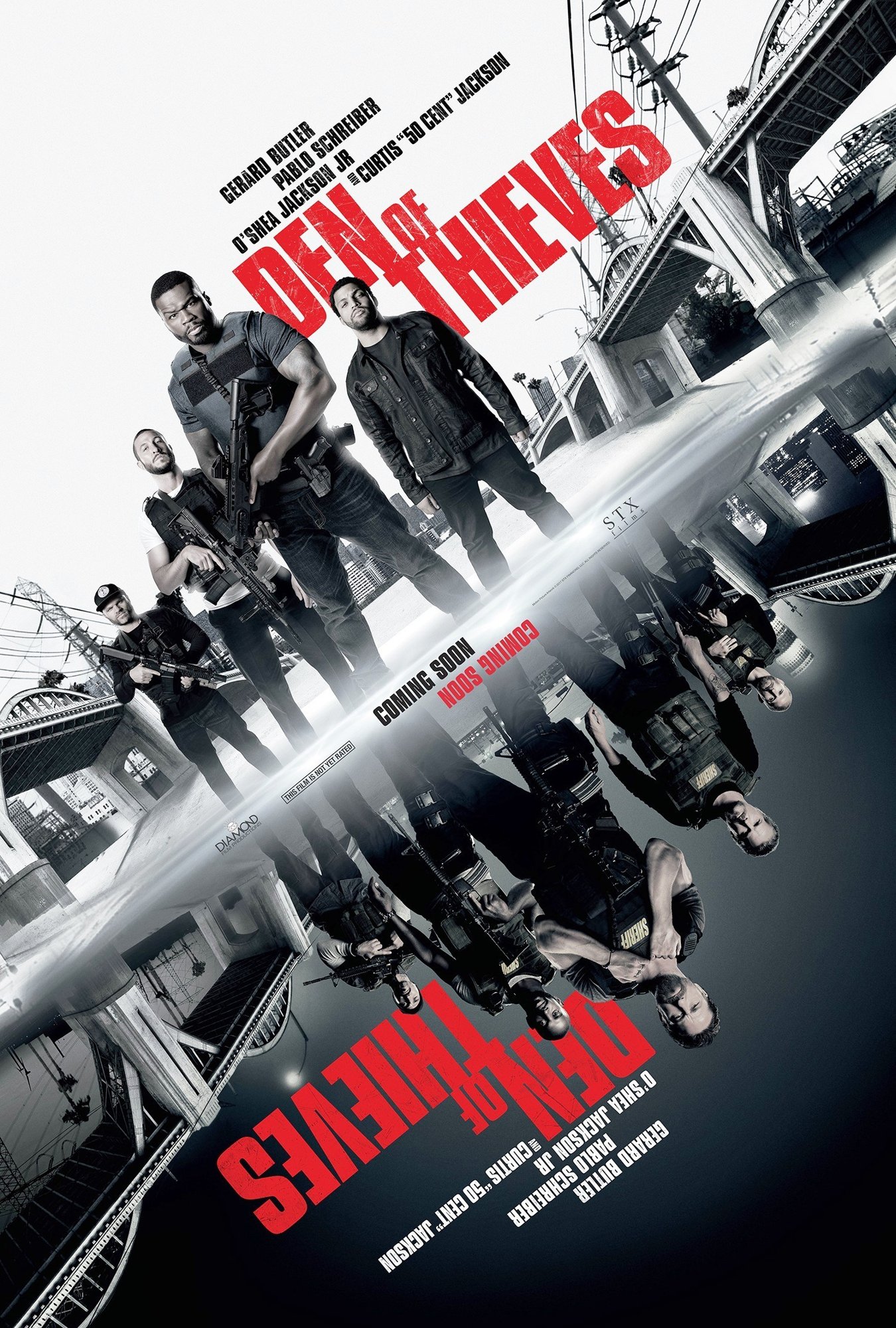 Nick O’Brien (Gerard Butler) is a hard-drinking, weird and sometimes difficult-to-work-with detective working in L.A. In fact, he’s been working so hard, that he’s ruined just about every other relationship that he’s had in his life and it’s made him care about his job a lot more than ever. And now, with a string of a murders and robberies occurring in an odd fashion, he can’t stop obsessing over who may be behind it and better yet, what he can do to stop them. Turns out, it’s a group of ex-military men who spend most of their days meticulously planning out their next big score and it’s up to Nick to figure out just what that next big score is, where it’s going to happen, how, and whether or not they’ll be able to stop it with everyone in his crew still alive.

On paper, Den of Thieves steals a lot from other, much better pieces of source material. There’s a lot of Heat, a lot of the Shield, a dash of the Town, and even a weird look and feel that reminded me of a movie called Takers, which was a similar heist flick that time has seemed to have forgotten about. Regardless, all of these substantial similarities should break a film, especially one that’s trying to so desperately get by on its spirit and prove that it’s hip, edgy, cool, and most of all, original.

But here’s the thing: It isn’t. And yet, I still found myself enjoying a great deal. And why is that? Well, for one, Den of Thieves doesn’t take itself all that incredibly seriously, which may lead to a couple of truly corny, B-movie moments, but writer/director Christian Gudegast knows that material like this is best served on a silly, somewhat over-the-top platter, where characters are dressed head-to-toe in tattoos, are constantly dick-measuring, lifting, and shooting guns because, hey, they need a little practice. It’s dumb for sure, but it’s the kind of movie that absolutely knows what it is and makes no apologies for it.

But here’s where I think most of the hate originally came for Den of Thieves and it was probably for Butler himself. As per usual, he shows up as an incredibly masculine, bearded, rough, raw, and altogether annoying protagonist that we’re all supposed to love and adore, but in this case, as Nick O’Brien, not really. It’s strange, but Butler’s actually playing a character this time around and rather than us just watching him flex and try to be intimidating, he’s a flawed, somewhat over-the-top person who pushes those he loves away from him and is becoming more and more obsessed with these criminals that it’s starting to ruin every aspect of his life. For what seems like the first time in ever, Butler is actually playing a character and acting and it’s quite a sight to behold; he’s clearly having a ball and for once, we join him.

The same can sort of be said about the rest of the ensemble, but really, Den of Thieves mostly about the heists and the action, which is fine because it mostly all works. Gudegast keeps racketing up the tension just enough that, by the time the ultimate heist comes around, you’re not sure quite what’s going to happen. Even the heist itself, while definitely contingent on quite a few ridiculous coincidences, is still fun to watch and keep track of. And for any heist movie, this is all that matters – tension and fun.

Both of which, surprisingly, Den of Thieves has in spades.

Consensus: Tense, energetic, and surprisingly fun, Den of Thieves proves to be one of Butler’s better action-vehicles in quite some time, even if it’s never wholly original.