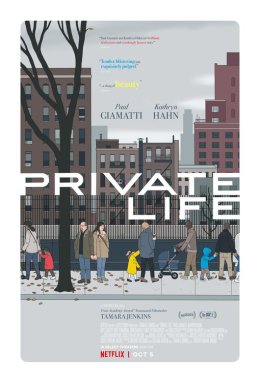 Pregnancy: Give it a shot. Literally!

Richard (Paul Giamatti) and Rachel (Kathryn Hahn) have been married for quite some time and have been putting-off having a child due to their burgeoning careers. But now, as they’re getting older and a tad more lonely, they decide that it’s finally the time to have a kid, only it’s that, they don’t know if they can. There’s a lot of surgeries, a lot of egg-transplants, IVF, and procedures that take so much time and money that neither really know what they want to do; they want to have a kid in their lives and are open to adoption, however, they’re a little torn. Then, in walks Richard’s brother’s step-daughter, Sadie (Kayli Carter), a 25-year-old college dropout who doesn’t really know what she wants to do with her life. This leads both Richard and Rachel to think of a possibility: Have Sadie use her eggs for the birth, since she’s young and most likely fertile. It’s a weird situation, but for both Richard and Rachel, they’re desperate enough for it to work and need it to work.

Private Life is the latest from Tamara Jenkins in ten years and it seems like she either takes her time so much for the perfect idea to come through, or Hollywood just doesn’t like projects by women (the latter is probably the most true), because of her three projects (this, Slums of Beverly Hills, and the Savages), they’ve all been done within a decade or so of each other. And it’s a real shame, too, because with Private Life, Jenkins shows that she’s got a smart, original and downright funny voice that makes you think, makes you cringe, makes you laugh, and most of all, makes you cry a little. Which is odd saying that for a movie that could be classified as a “IVF-comedy”, but at the same time, it’s not really that.

I mean, yes, it most definitely has a lot of humor to it and it is most definitely about a couple trying to get pregnant and/or have a kid, but that’s mostly on the surface – look closer and you’ll find that it’s actually a somewhat sad movie about a couple trying to stay together and love one another, while also being a movie about the honest difficulties that come with trying to have a kid or be a parent in any sort of way, and all the soul-sucking it can handle. Jenkins doesn’t seem all too comfortable setting up jokes with a punchline, as much as she likes to set up a scene, or a character, and just let the comedy free-fall from that and it’s a joy to watch; someone like Judd Apatow would have taken this material and just riffed on the idea of conceiving a child, whereas Jenkins goes above and beyond. She’s a smart, savvy writer and to watch her in-action, makes me both happy and mad.

Happy, because she knows what she’s doing and is a pro at it, but also mad because why oh why do we have to wait ten years for her to make another movie?!?

Anyway, as I said, Private Life is a sometimes hilarious movie, but it mostly works because of its characters and amazing ensemble. Giamatti and Hahn are, unsurprisingly but surprisingly at the same time, the perfect match for one another as Richard and Rachel, because while they always seem happy and in love, there’s always an odd bit of underlining tension between the two. You know that they are in this through the thick and thin, but at times, you’re never too sure and you actually care because they’re both likable and clearly in-love, which makes Private Life all the more serious as it goes along. And also, to have Molly Shannon and John Carroll Lynch show up as the sorta siblings, makes it all the more lovely to watch; just having those four, in a room, sitting and talking, is more than enough worth the price of admission.

But surprisingly, it’s Kayli Carter who steals the show. There’s something inherently different about the character of Sadie that makes her already more interesting to watch; she’s pretentious and artsy, but she’s also self-aware about it all and not particularly a mean person. She may say and do the wrong things at times, but mostly, she means well and seems much nicer than a lot of her counterparts. Whenever she’s around, there’s an odd bit of tension, which was probably already made as such in the script due to the fact that she’s the main source of fertilization for Richard and Rachel, but really, Carter keeps you on-edge. She’s both real, funny and honest, but never seeming like a screenwriter’s imaginary dream of what all teens are – I’ve met this kind of person way too often before and love them or hate them, you still remember them.

Just like you’re sure to remember Private Life. Please do.

Consensus: Sweet, sad, but always rash and honest, Private Life works as a comedy, a drama, and an interesting look at the modern-state of the art of conception and parenting in America, while also using its amazing cast to perfection.