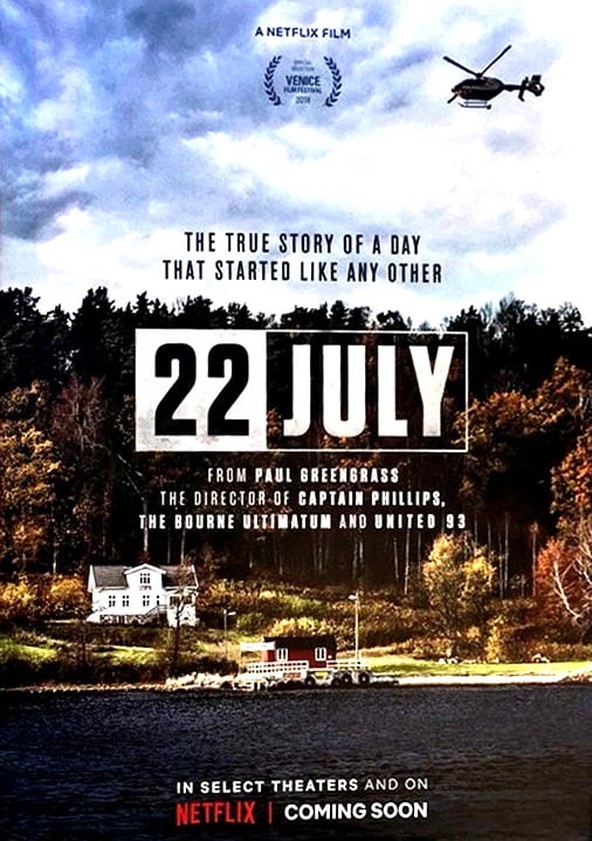 So many angry white guys.

It started like any normal Norwegian day. The sun wasn’t really shining, but people were happy, peaceful and ready to go about with their lives. Then suddenly, a bomb explodes in Oslo, right where the Prime Minister was staying. Everyone’s already confused, scared and worried about what’s to transpire next when, without even a single second of thinking, they catch wind of another terrorist attack, but this time, happening on a secluded island where a bunch of young, ambitious and simple teens were attending summer camp. 69 of them would wind-up shot and killed, with many others left fatally wounded and forced to remember that one fateful day for the rest of their lives. Not to mention that they’d have to remember the terrorist, Anders Behring Breivik (Anders Danielsen Lie), and the stance he maintains that he was doing this for the right of the country. But hey, it’ll all be cleared-up in the trial, right?

22 July is a brutal piece of film-making for the first half-hour or so. Paul Greengrass doesn’t take much time in getting right into the terrorist-attack itself, with the bombing, the shooting, the killing, the running, the screaming, and the blood. Oh, the blood. This initial half-hour is so grueling, so hard-to-watch, and so damn disturbing, that it’s hard to imagine how a movie such as this can bounce back and continue on its course with its story, its characters, and its message.

It sort of does because Greengrass, as much as he focuses on it right away, isn’t too particularly concerned with the terrorist-attack itself, but why it happened and what the overall aftermath of it all was. For a movie that’s nearly two-and-a-half-hours, it’s surprising how much of it is played-out in a very small, subtle and monotone-pace, even after the fiery and explosive first-half; it’s as if Greengrass wanted to fool us into thinking that this was going to be another Bourne-ish thriller on the terrorist-attacks. But it’s really not, and even though we get the same old shaky-cam, here, it works and gives us the impression that we are watching a documentary, with real people, going through these real issues as they were going along.

But at the same time, 22 July doesn’t totally keep up with itself in these latter two-halves because, well, it’s just too long and a little meandering. Greengrass seems to be interested in the human-side behind this story, by focusing on one victim in particular, the terrorist, the lawyer of the accused, and even a small bit of the PM himself, but really, Greengrass is just following them around as they live their day-to-days and it’s not all that interesting. He doesn’t really have anything to say or do, but just portray and sometimes, that isn’t enough, especially when you’re taking on such a hot-button and relevant topic like white nationalism.

An all too relevant topic, if you ask me.

But hey, Greengrass is at least taking a look at all sides and figuring out what he feels and it seems like he doesn’t have a point in the first place. Focusing on one of the victims, played wonderfully by Jonas Strand Gravli in a very demanding role, gives some insight into the victims’ plight after this incident and how one continues on even after something as horrible as this. But once again, there’s always something holding Greengrass back from digging deeper; he’s sweet and earnest, when it sometimes seems like he should a little more rough and rash. It’s okay to leave some stones unturned because of not wanting to simply “go there”, but sometimes, going there may be more beneficial for all parties involved.

And it’ll piss-off racists, which is always a lot of fun.

Consensus: Tense and emotionally taxing, even despite it clocking in at nearly two-and-a-half-hours, 22 July finds Greengrass in usual-form, although a bit more sedated this time around.