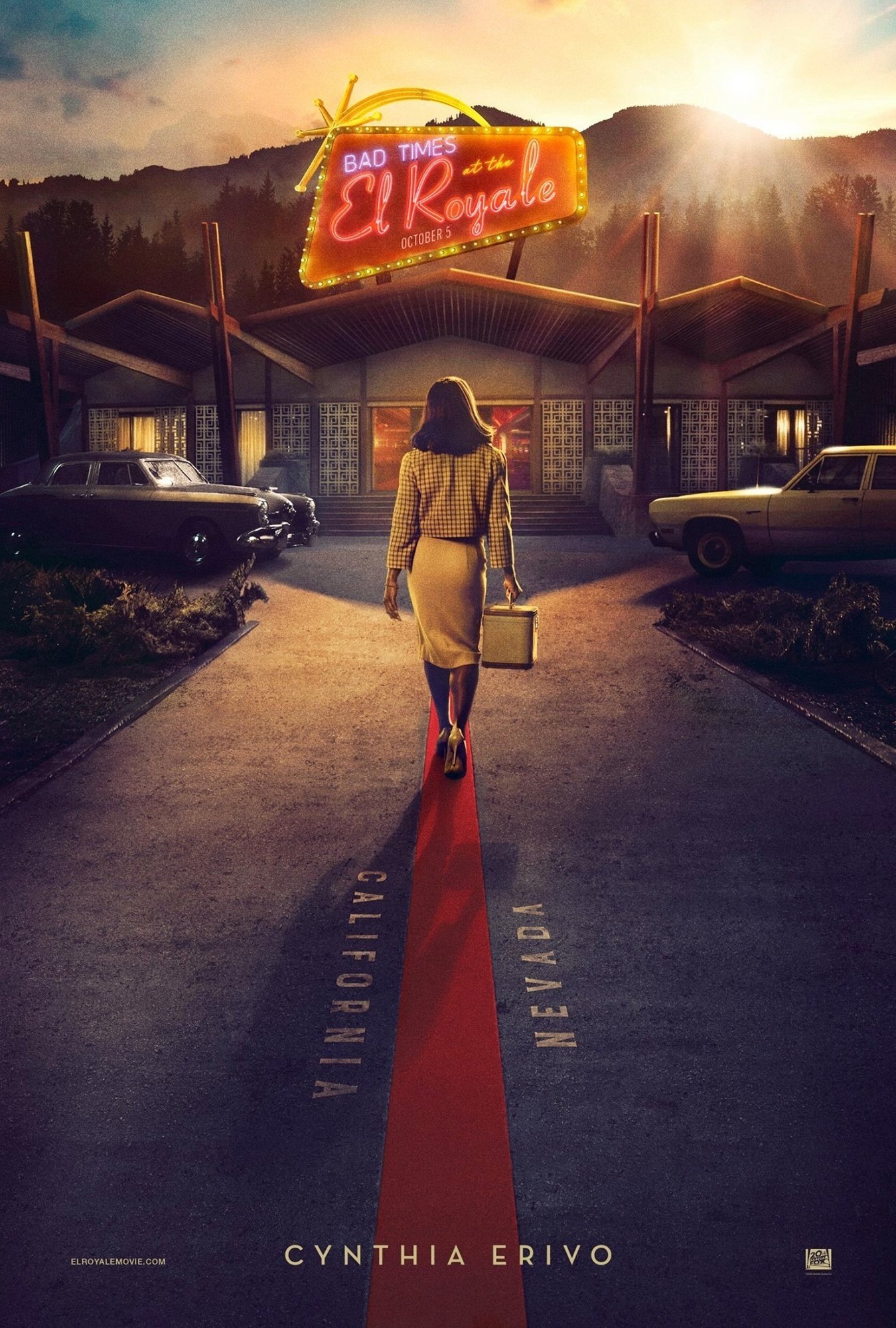 Next time, stay at the Ritz.

The El Royale is a hotel that straddles along the California-Nevada state line and back in the day, when gambling was allowed and legal, it was quite the happening place. But now, in the late days of the 60’s, it’s definitely seen better days; it’s run-down, dusty, and vacant, almost to the point of desertion. However, on this one fateful day, a group of strangers all check in and find themselves intertwined in more ways than one. There’s Father Daniel Flynn (Jeff Bridges), a priest who needs some peace and quiet so that he can pray; there’s Darlene Sweet (Cynthia Erivo), a soul-singer with a rough history of racism and sexism and is in town for a local gig that doesn’t pay well, but it gets her doing what she wants to do; there’s Laramie Sullivan (Jon Hamm), a foul-mouthed and rude vacuum-salesman who constantly pokes his head into everyone’s business; and lastly, there’s Emily Summerspring (Dakota Johnson), a brash and rather rude hippie-chick who doesn’t take too kindly too strangers. Meanwhile, there’s the hotel’s concierge, Miles Miller (Lewis Pullman), who knows the deep and dark secrets of this hotel and has seen a lot of awful stuff go down behind those doors.

And tonight, it’s about to get a whole lot worse.

Bad Times at the El Royale could easily be thrown-out as a “Tarantino rip-off” and never given the light of day, which is a bit of a shame. Sure, it’s a funny and clever, yet brutally dark, sinister, and twisty crime-thriller, with colorful characters and lots of storytelling, but it all actually works and doesn’t feel like it’s just trying to do what Tarantino does, except worse. Writer/director Drew Goddard, who made the equally-as-clever Cabin in the Woods, knows a thing or two about building tension, then side-stepping a bit for a clearer clarification on what we’re seeing and it helps not just build this story, but these characters and give us the impression that we are in some form of hell, and there’s no escaping.

Which is pretty how much the end of the 60’s were, right?

Anyway, yeah, Bad Times is a solid piece of crime-thriller because it almost never seems like it’s trying too hard, despite it trying very hard to. At an hour-and-20-minutes, it can feel quite long and rather sluggish, but Goddard packs so much development in there, from the plot to the characters, that you almost don’t care – there’s always something going on, someone saying something, and something to expect next, that even when the movie seems like it’s taking too much of its good old time, you get a little ticked for about five seconds, and then remember that something neat is about to happen.

And that’s why a movie like Bad Times is doomed to fail from the very start: It’s just too much of its own beast, yet not too wildly original or memorable. It’s got a great deal of tension and mystery in the air, but the further and further we explore these characters and what it is about them that ticks, the more we realize that it’s all Goddard has to play with. The plot goes through twists and turns, but mostly ends up in the same spot you’d expect it to (and it’s one I predicted in the very first five minutes, unfortunately).

So really, the movie depends on the characters and the ensemble, which is fine because they’re all very good. Bridges is, as per usual, warm and endearing, even with a slight bit of danger; Hamm is fun and hilarious, but not in an annoying, overly coy way; Johnson is a bad-ass and reminds me a lot of her mother’s earlier-roles; Chris Hemsworth shows up as a Charles Manson-type, and while his American-accent is still a little off, he’s perfectly creepy and unsettling; Lewis Pullman is eerie and somewhat sad as the concierge, who is just brimming with tension the whole time; and lastly, there’s Cynthia Erivo, the real stand-out of the whole show, as Darlene Sweet, a woman we come to know more about and sympathize with, hoping for the best, but given the climate and the world around her, expect the worst.

Consensus: No doubt in the shade of other, much better movies, Bad Times at the El Royale still packs a pulpy, entertaining, and clever punch that keeps its ensemble and audience busy for the whole two-hours-and-20-minutes it’s on-screen.