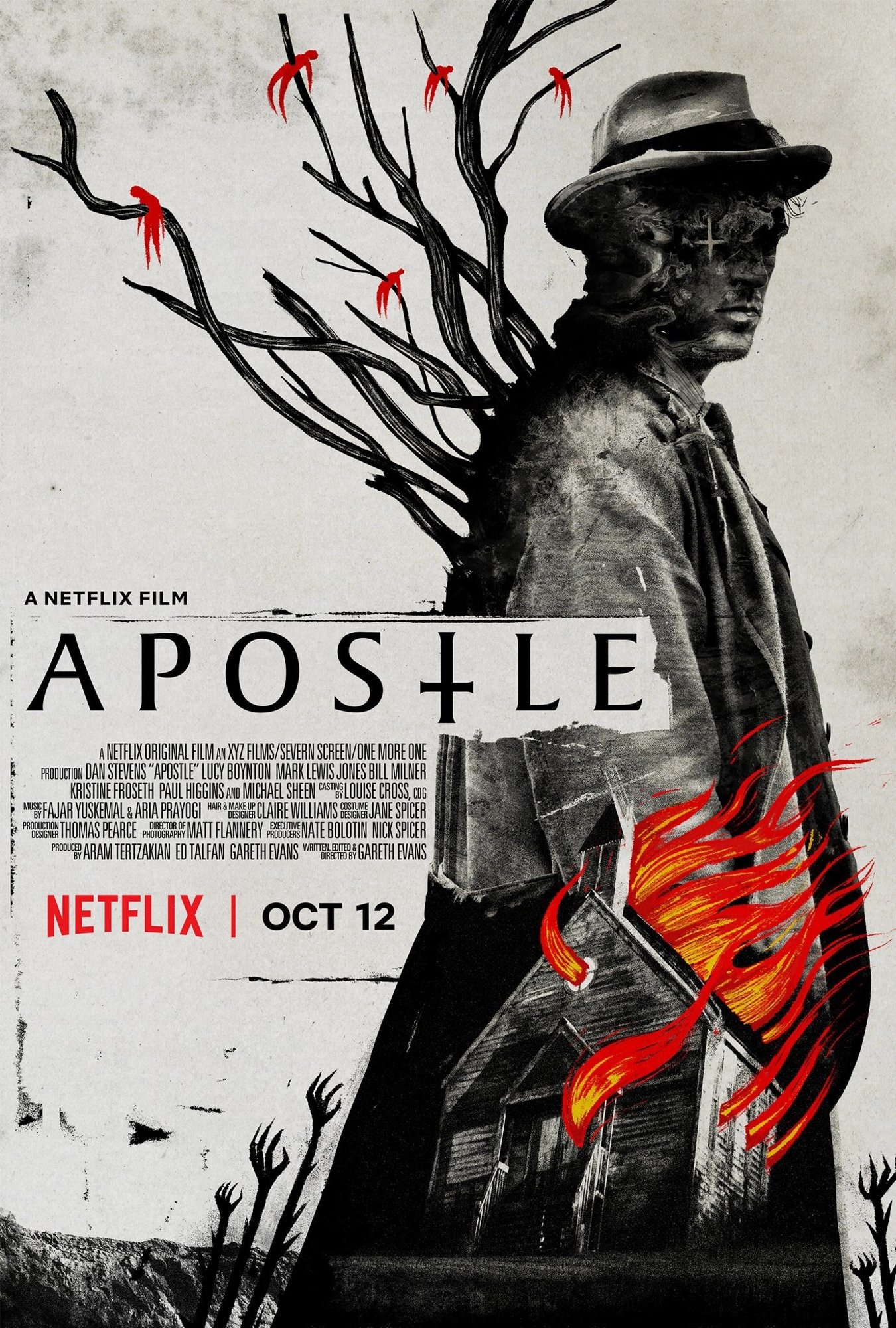 In 1905, Thomas Richardson (Dan Stevens) receives a letter from a cult that his sister has been kidnapped and they want money for her. Thomas, stunned and surprised, decides to head-out to the island where the cult is and not just find his sister and bring her back, but see what the hell all of this commotion is about. Turns out, quite a lot. The Prophet leader (Michael Sheen) has everyone there wrapped around his finger and his every word, making it so that anyone can do anything, at anytime, all because of what the Prophet said to do. It’s a very scary place and while Thomas is searching far and wide for his sister, he too gets wrapped-up in all the craziness and disturbing nature of the cult and realizes that there’s something deeply sinister at-play here and he doesn’t know whether to stop it, or just find his sister and leave.

Apostle is not like Gareth Evan’s two Raid films, and at times, you almost wish it was. Sure, it’s gory, mean, disturbing, creepy, and off-putting, but it’s never incredibly tense or even fun like those movies were – it’s just drab and depression, not to mention filled with a bunch of crazy stuff that either feels like too much, or not enough. Also, it’s hard to look at another movie about a guy getting some sort of revenge on a cult, after Mandy; one’s just near-perfection, whereas the other isn’t.

However, what they both have going for each other is that they’re creepy and that’s always something, isn’t it?

Anyway, yeah, Evans tries to tackle too many story-threads and genres at once, that by a certain point, it becomes overkill and you almost want them to get back to the whole “brother-retrieves-sister-at-cult” plot. Cause aside from Dan Stevens’ plot, there’s a weird feud between the cult-leaders, supernatural creatures lurking in the woods, trees coming to life, a forbidden romance and eventual pregnancy, and some weird ritual with blood. In between all of that are bursts of upsetting and rather off-putting violence, which are all graphic in-nature and shock, but also feel like overload – almost as if Evans knew that he needed to up the ante on the savage torture, without really finding a reason why (just cause?).

But through it all, it’s hard not to watch Apostle and wonder where it’s going to go next, because Evans does know how to keep the plot moving and the tension building, even when we’re not sure to what. There’s no real violence like the slap-down, beat-up, drag-out brawls of the Raid movies, but then again, there didn’t need to be; Evans is making something more meaner and more melodic, which is nice to see, even if it doesn’t fully come together by the end. If anything, Apostle proves that Evans has more on his mind and slate than just brutally-chaotic action movies like the Raid, but it also proves that perhaps he should slow things down and take a second to figure out what his next story is going to be, before he decides to cram all of them into one.

You know, or not. Just a thought.

Consensus: As weird, off-putting, creepy and disturbing as it can get, Apostle never quite rackets up as much tension or craziness as you’d expect or want, mostly due to too much plot and damn dreariness.