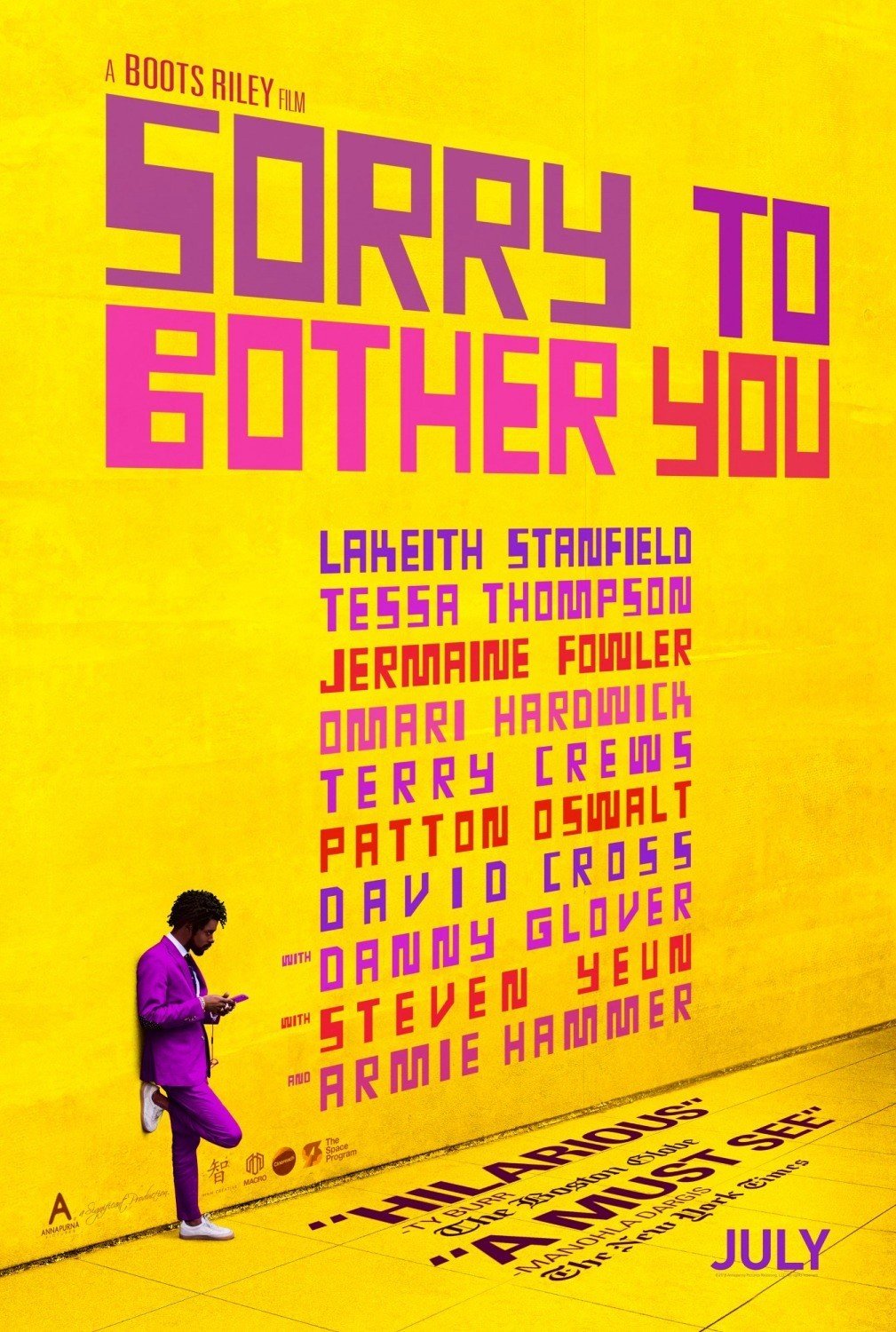 In an alternate, present-day Oakland, Cassius Green (Lakeith Stanfield) is just a normal guy who finds himself slaving away at a meaningless, deadly boring job as a telemarketer. He’s trying his best, but for some reason, it’s just not working out and it’s starting to get on the nerves on not just himself or his uncle (Terry Crews), but also his girlfriend, Detroit (Tessa Thompson). But he soon figures out a secret on how to become a great telemarketer and well, it gets his career going in the right direction to where he impresses everyone and anyone around him. That is, everyone except for those who loved and respected him before he started becoming rich and successful. And now, what with a resistance forming between all of the lower-level employees, Cassius finds himself in an odd position of wanting to make all of the money that he can and being respected, while also staying true to himself and sticking to his roots.

Sorry To Bother You gets plenty of points in the originality department, which is better than nothing. It’s superbly weird, off-kilter, random, silly. satirical, funny, disturbing, but always original, which makes it better than most directorial-debuts that try way too hard and don’t end-up saying or doing anything of merit. And for his first time, Boots Riley does a lot of wacky and wild things, most of which land and most of which, don’t.

Does that make Sorry To Bother You a bad, or even a good movie? It’s hard to really figure out.

It’s the kind of movie where you can tell that because this is the writer/director’s first time behind the chair, that they want to say and do everything that they’ve ever wanted to say or do, because well, they may never get the opportunity again. This usually leads to a disjoint between tones, messages, and even plot, where things happen drastically and don’t really make much sense, and before you can even comprehend what it is, the movie’s already off to something new. This allows for Sorry To Bother You to never be boring, but it also doesn’t help to hold your hand while you’re trying to navigate through Riley’s mind and what he’s trying to say.

But as confusing and crazy as it can sometimes get, Sorry To Bother You still remains an interesting and always compelling look at race, gentrification, and business-politics, and how the rich and white continue to get richer and more powerful, whereas those on the bottom, continue to suffer at the hands of said rich folks. The whole idea of an uprising and even the forming of a union is an interesting one that Riley develops well enough to had the movie been just about this, it would have been fine is.

But it’s not just about that. It’s about so much more and it’s why it’s always worth paying attention to, even when you don’t really have a clue of what’s going on.

Because at times, it’s funny, whereas at others, it’s disturbing. And even, at some other times, it can be just downright weird, and in a day and age where it seems like any movie featuring an ensemble cast, solid production-values, and large audience-reach, can’t afford to be weird a single bit, it’s a refresher to get a movie like Sorry To Bother You. It doesn’t always have to work, but sometimes, it just has to do something neat and cool.

Consensus: Odd, crazy, all-over-the-place, but always entertaining and interesting, Sorry To Bother You swings for the fences and doesn’t always hit it out of the park, but it goes and gets places you don’t normally expect it to, making it definitely worth the watch.