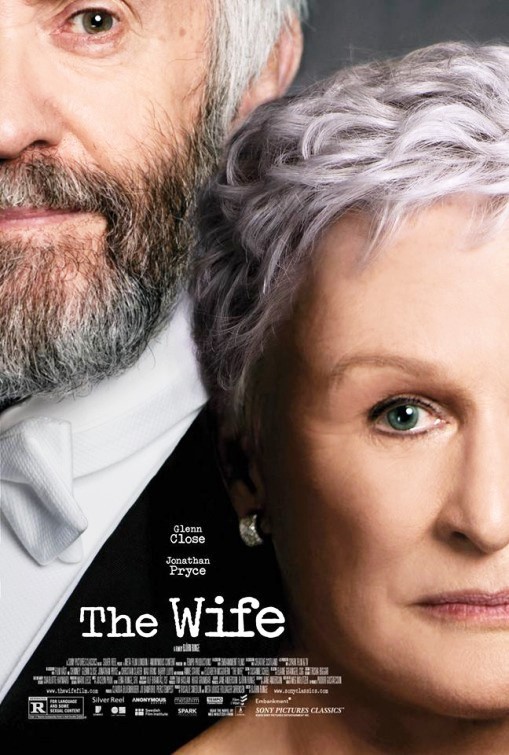 Keep your friends close, but your significant-other closer.

After nearly 40 years together, Joe (Jonathan Pryce) and Joan (Glenn Close) remain as close and as passionate as ever. However, their bond gets tested a bit when it turns out that Joe wins the Nobel Prize for his writing. Joe’s very happy and gets swept up in all of the commotion, the excitement and the constant coming and going of new people he’s never had the pleasure of meeting before. Joan, on the other hand, is keeping her cool as much as she can for her dear hubby, but even she’s realizing that this may be all too much Joe and with a biographer (Christian Slater) snooping around, it’s making her think of the past unlike she’s ever thought about it before.

I’ll just say this: It’s easy to see where the Wife‘s going, probably from the very start. Whatever mystery’s it holds, or twists and turns come around the bend, I hate to say it, are clear and identified probably from the beginning. And normally, this would be a deal-breaker for yours truly, but the Wife honestly isn’t really all about the surprise, or the twists, or the turns, or the big-reveals – it’s always about the characters and that’s what sets it apart from most other movies that forget to do the same.

And it also helps that when you have Glenn Close in your lead role, there isn’t much wrong you can do.
And speaking of her, she’s great, as per usual, playing Joan. While this is not necessarily a showy role for Close, it doesn’t matter; she’s compelling even when she’s hardly saying anything at all. Sometimes, it’s just a look in her eye, a tightening of a body-part, or just the way she reacts to another person, every little thing she does here is simply perfection. It makes you happy to see Close, a woman of her stature and talent, still get these meaty roles to chew-up and spit out, but it makes you even happier to just see characters, of her age and her own problems, still get a movie.

Same goes for Pryce’s Joe who, despite playing mostly second-fiddle to Close’s Joan, still leaves an impression. While his role is much more loud and obvious, it’s a good one that Pryce works with well, giving us a glimpse inside the soul of one of those sophisticated and pretentious intellectuals who loves his work and nobody else’s. You hate him and want him to shut up, but you also understand him and Pryce is just so perfect at towing that line between unlikable and hard-to-totally-hate.

And the same could be said for the Wife: It’s not necessarily a movie that you’ll ever love, nor will you hate.
As it stands, it’s a solidly-acted, character-study of two people we know in our own lives and it works as such. It doesn’t try to change the world, or shake the foundation on which we live on – it’s just telling a simple, yet complex tale of two very complex human beings. Both of whom, may I add, happen to be older and when do we get movies like that?
Consensus: With two knock-out performances by Pryce and Close, the Wife becomes a smart, compelling look at characters we don’t too often see get portrayed in the movies nowadays.
7 / 10