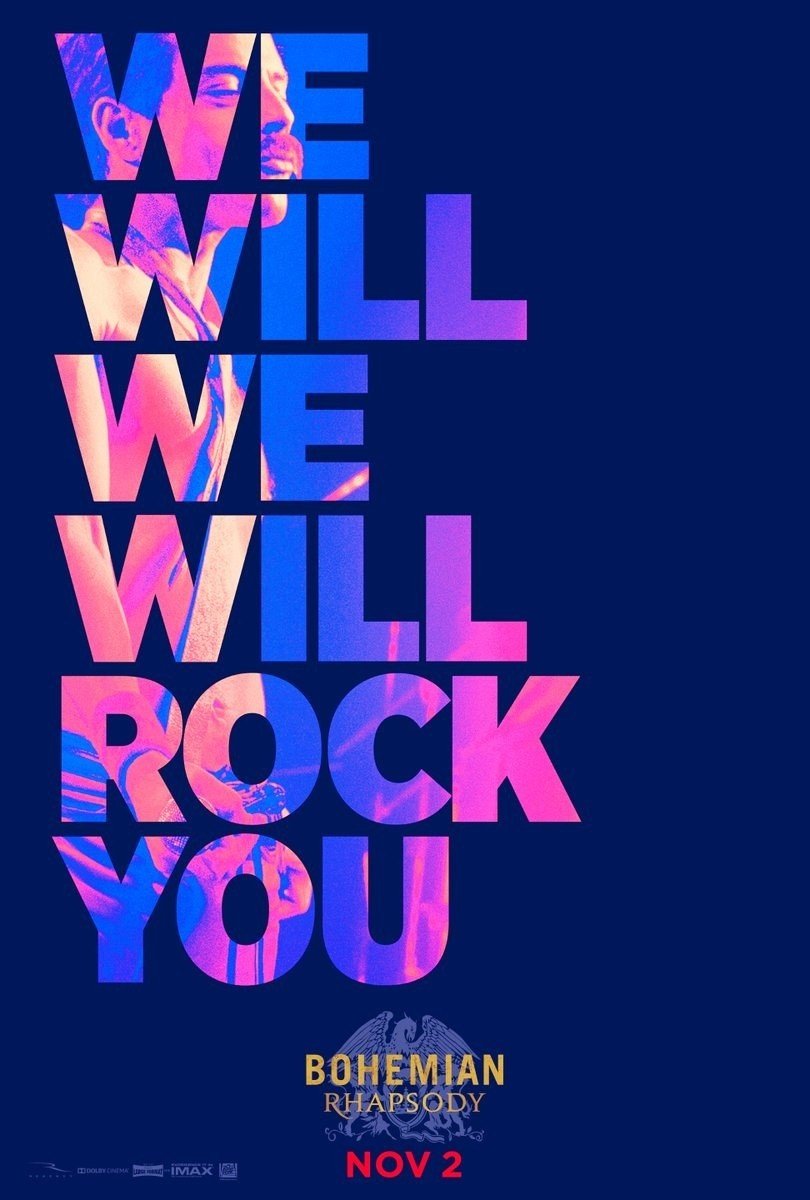 Freddie was gay? You don’t say?
Queen was, at several points in their career, one of the biggest and best bands in the world. They were fun, exciting, accessible, and always savvy when it came to writing perfectly catchy sing-along pop songs that it seem like everyone and their grandmothers knew. But even with all of the fame, fortune, glitz, glamour, love, adoration, and riches, there was always the driving force that not only kept the band together when they were in dire straits, but also the one who ended them once and for all: Freddie Mercury (Rami Malek). This is his story of him starting out as a young, ambitious and bright design student, with a voice of a beckoning angel that would soon one day take over the world with his love and charisma. But sometimes, all of that love and charisma didn’t extend to behind-the-scenes, where he lived a much sadder and perhaps more depressing life.

Right before you see Bohemian Rhapsody, you have to know what you’re going to get, just as is the case with every musical-biopic you see: Not everything’s going to be entirely true, some people’s portrayals are going to be better than others, and oh yeah, the music will always be great. And that is exactly the case here, in the sense that we know that guitarist Brian May and drummer Roger Taylor helped produce this, already giving you the idea that this is going to be their two-cents on just about everything that happened to Queen and Freddie. And why shouldn’t they? It’s their band, their lives, and their stories to tell.

But like I said, though, that doesn’t always bring out the most accurate-portrayals of pop-culture icons that deserve something better and much more truthful.
Though, like I said before, though, the music is still rockin’ and fun, which is all that matters, right?
Regardless of whether Bryan Singer or Dexter Fletcher directed the majority of it or not, Bohemian Rhapsody is a fun movie that knows its audience and knows that people will want to hear the songs, see the performances, and feel as if they are apart of something truly magical and lovely. Which it is, when you’re watching these performances, some of them created from move-by-move; Freddie was such an enigmatic and lovely character both on-and-off the stage, it makes sense that the movie about him would only measure-up to the craziness that he sometimes reveled in. And there are plenty of musical-sequences, so even if you think there’s too much sitting around, talking and silence going on, have no fear, because a number’s about to come flying right out of the flood-gates.

That said, even all of the sitting around, talking and silence, isn’t all that bad. Bohemian Rhapsody loves the excitement and the joy of these big musical-numbers, but when it haves time to scale everything back a bit, it still works. Mostly, it pays attention to Mercury and how sad his life was when he wasn’t doing what he did on the stage; the party never ended when he was performing in front of others, but when the others weren’t around, he had no one to perform for. For a movie that’s so in-love with its song-clearances, it sure does enjoy the awkward silence and pauses that we don’t usually notice, except for when it’s coming after a loud crash and bang.

Which is also a credit to Rami Malek who, by this point, you should already know as being a pretty great actor, but as Mercury, he reaches new heights. Not only does he look like him in some strange ways, but he captures his fun-loving essence that takes over every scene he’s in; even the ones that he isn’t in, you can feel him, somewhere, doing something crazy. It makes the movie much better, by default, even though a good portion of it is probably total and complete bull-s**t.
But then again, so was the music that Queen made, with the exception of a few solid choices, so why should the movie really be any different?
Consensus: Exciting and fun when it’s focusing on the music, but still equally as interesting when it focuses on the small and mundane, Bohemian Rhapsody may not be a game-changing, or even smart biopic, but it’s a step in an diverting, entertaining direction.
6 / 10
Photos Courtesy of: 20th Century Fox