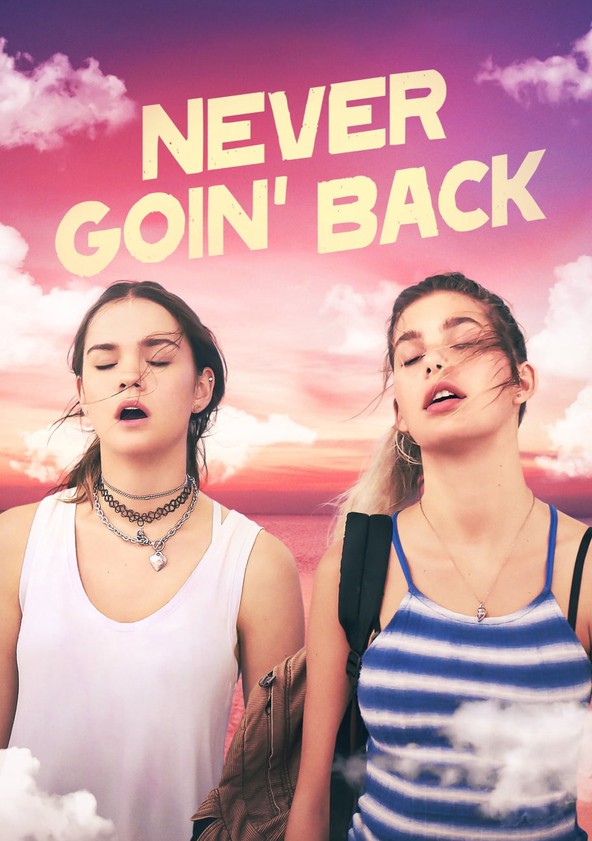 Who needs boys? Or jobs? Or houses?

Angela (Maia Mitchell) and Jessie (Camila Morrone) are two best-friends who not only live together, work together, but plan on spending the majority of the rest of their lives together. It’s a sweet, honest, and relatively healthy friendship that does occasionally find them both getting into some wacky and wild shenanigans, but for the most part, keeps them in a happy place, where they don’t have to worry about authority-figures getting in their way. And it’s why they think that they need a little break from life and plan on a beach trip one weekend, until their place is robbed. Basically, after this, all hell breaks loose and it has them going down a road where they have to fend for themselves, get enough money to still finance this trip, and oh yeah, make sure that they can stay out of jail, by any means necessary.

On paper, Never Goin’ back is a pretty simple premise and even the movie itself, is simple, too. It’s a coming-of-ager, sort of, but it’s mostly a silly comedy about two girls constantly finding themselves in all sorts of trouble and craziness, no matter where they go. It’s basically an updated screwball comedy, where we actually get girls who drink, smoke, curse, sort of have sex, do what they want, when they want, how they want, and don’t really play by any rules.

It sounds cheesy, but it somehow all works.

And that mostly comes down to the fact that through all of the wackiness that ensues in Never Goin’ Back, there’s always something fall back on, which also just so happens to be these characters: Angela and Jessie. Writer/director Augustine Frizzell has a deep understanding of who these two girls are, why they are the way they are, and how they both compliment each other in certain ways; they aren’t just interchangeable bad girls who also both have attitude problems, but bad girls who are interchangeable because of what they do and who they are as people. It’s the small things like this – like attention to characters, for instance – that makes a movie as simple as Never Goin’ Back, feel like so much more.

Cause yes, it is absolutely a comedy. A very funny one, at that. But it doesn’t always just try to get by on the laughs and silliness it sometimes falls in love with; it also flirts with this deeper idea and understanding of a friendship that may never change, or may change drastically one day. While Frizzell keeps things mostly at-bay and peaceful with the light-tone, there are bits and pieces where it gets dramatic and a little serious, and while it doesn’t always answer the questions the movie brings up (like, for instance, where the hell are the parents?), but it does enough to make us feel like we’re not watching just another typical, gross-out, raunchy, R-rated teen comedy.

It’s a little something more and for that, it’s definitely worth the watch. We need more of these kinds of movies, and ones that are especially done by women.

Consensus: With two charismatic leads, Never Goin’ Back gets by as being a very funny, but always entertaining coming-of-ager that feels like a much bigger step above the other dreck we get out there.