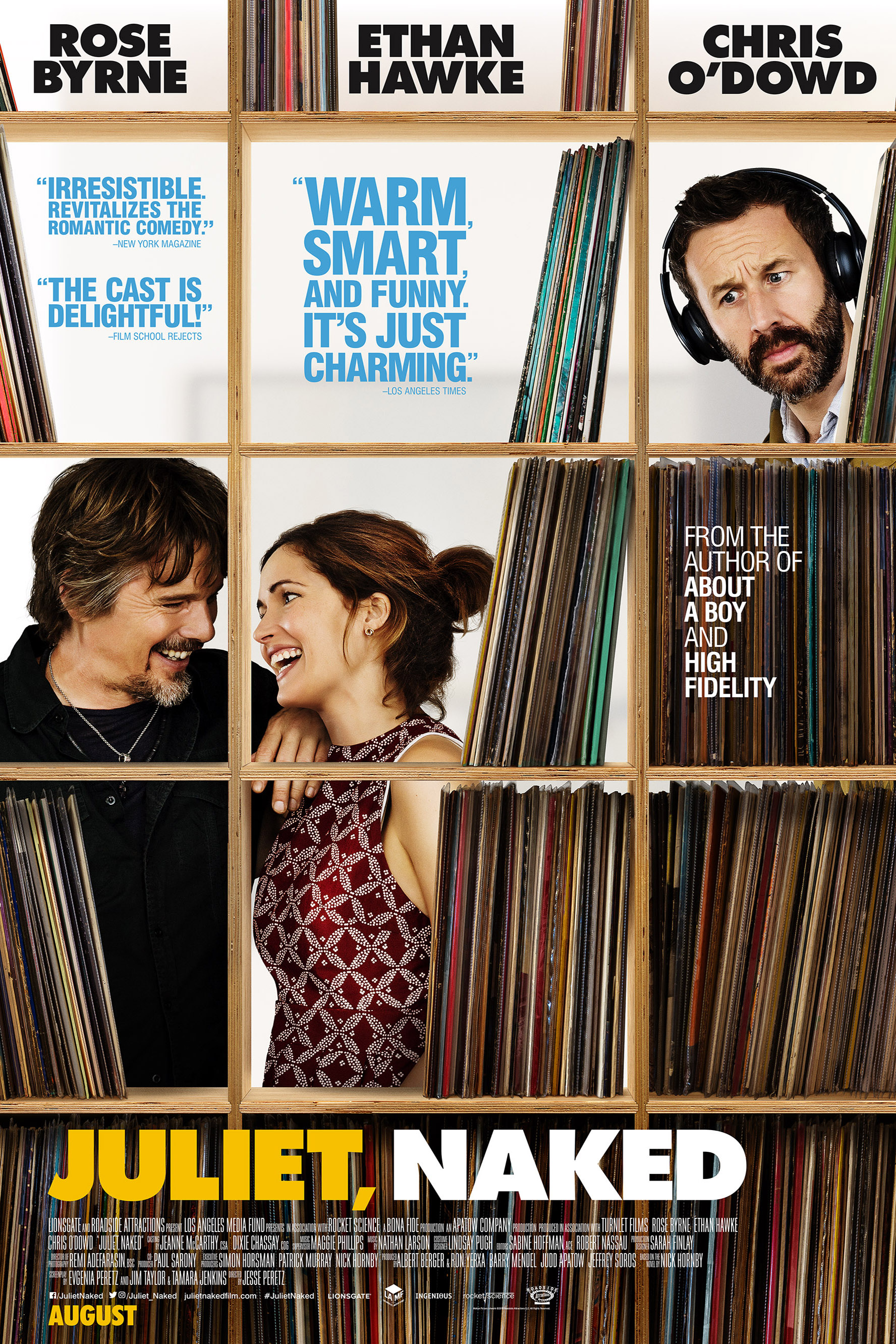 Annie (Rose Byrne) is in a long-term relationship with Duncan (Chris O’Dowd) and by this point, she’s starting to get a little bored. She wants to start a family and see what they can do together as a much more mature couple, but he’s so in love with music and staying the same age forever, that it’s nearly impossible. Cause rather than actually have kids and see what he can do as a daddy, Duncan spends most of his time moderating a blog dedicated to obscure, 90’s alt-rocker Tucker Crowe (Ethan Hawke), where he, as well as numerous fans from all over the world, can lay down their thoughts, hopes, wishes, dreams, and praises about Crowe. However, Annie does not feel this same kind of love and adoration for Crowe’s music and one night, out of an act of pure fun, lets her adverse opinion be known to the blog and it catches just about everyone’s attention. Most importantly though, it catches the attention of Tucker Crowe himself and he lets his presence be known to Annie.

Having read the Nick Hornby book some years ago, I already went into Juliet, Naked with a slight bit of hesitation because well, it’s very hard to get Hornby’s voice right for the movies without Hornby himself strictly involved. High Fidelity and About a Boy are the ones that come the closest (while also being the best adaptations), but even they feel as if they’re missing a little something that makes Hornby’s writing so lovely: Actual heart and emotion. The real reason why High Fidelity and About a Boy work, as books, is because they’re coming from a very soft spot from inside Hornby himself and even among all of the snark, the wit, and pop-culture references, there still lies a beating-heart, just waiting to be seen and held.

It’s what originally got me into his writing in the first place and it’s why I consider him perhaps my favorite writer.

But like I said, as for Juliet, Naked, it captures the heart, the humor, and the general silliness of the book and of Hornby’s writing. Director Jesse Peretz clearly seems to understand what makes these characters so lovable in the first place, even if they are totally flawed, and allows them to think, breathe and feel like real people, regardless of how quirky they can sometimes get. And even in Hornby’s world, it’s very hard to describe anyone as being “quirky” – they’re just light and colorful, really.

And it’s why this cast is so perfectly picked, I can’t imagine literally anyone else in these roles. Byrne is perfect as Annie, the somewhat sad, yet smart woman who takes control of her life in a way we can all sympathize with; O’Dowd, as per usual, is perfect as the hapless, doofus-of-a-boyfriend who, despite doing a lot of dumb things, seems to still stay believable as a real human being; and Hawke, well, is in the role he was meant to play. I don’t know if this was meant to be some sort of stunt-casting, but whoever thought of the idea to get Ethan Hawke to play a 40-something, washed-up rocker from the 90’s, deserves something of a pay-raise, because it’s the kind of role that just writes itself.

But even aside from the casting, Hawke is still great in the role because even though we see that Crowe is a screw-up and not the greatest human-specimen on the face of the planet, there’s something still so inherently lovable about him that we can’t help but be charmed by him. And it’s also easy to see why someone like Annie would (a part of the book that’s so subtle, but is captured perfectly here). Which is why I think Juliet, Naked works as well as it does, because it gets beyond all of the silliness, the snark, the bite, and the jams, and realizes that this is a story about a bunch of somewhat depressed, confused people, just trying to get by, with whoever they can, and falling in love, with whoever they can find. It’s honestly what all of Hornby’s stories are about, but so rarely do you ever feel that as well as you do here.

Trust me, it’s a lot sweeter than it sounds.