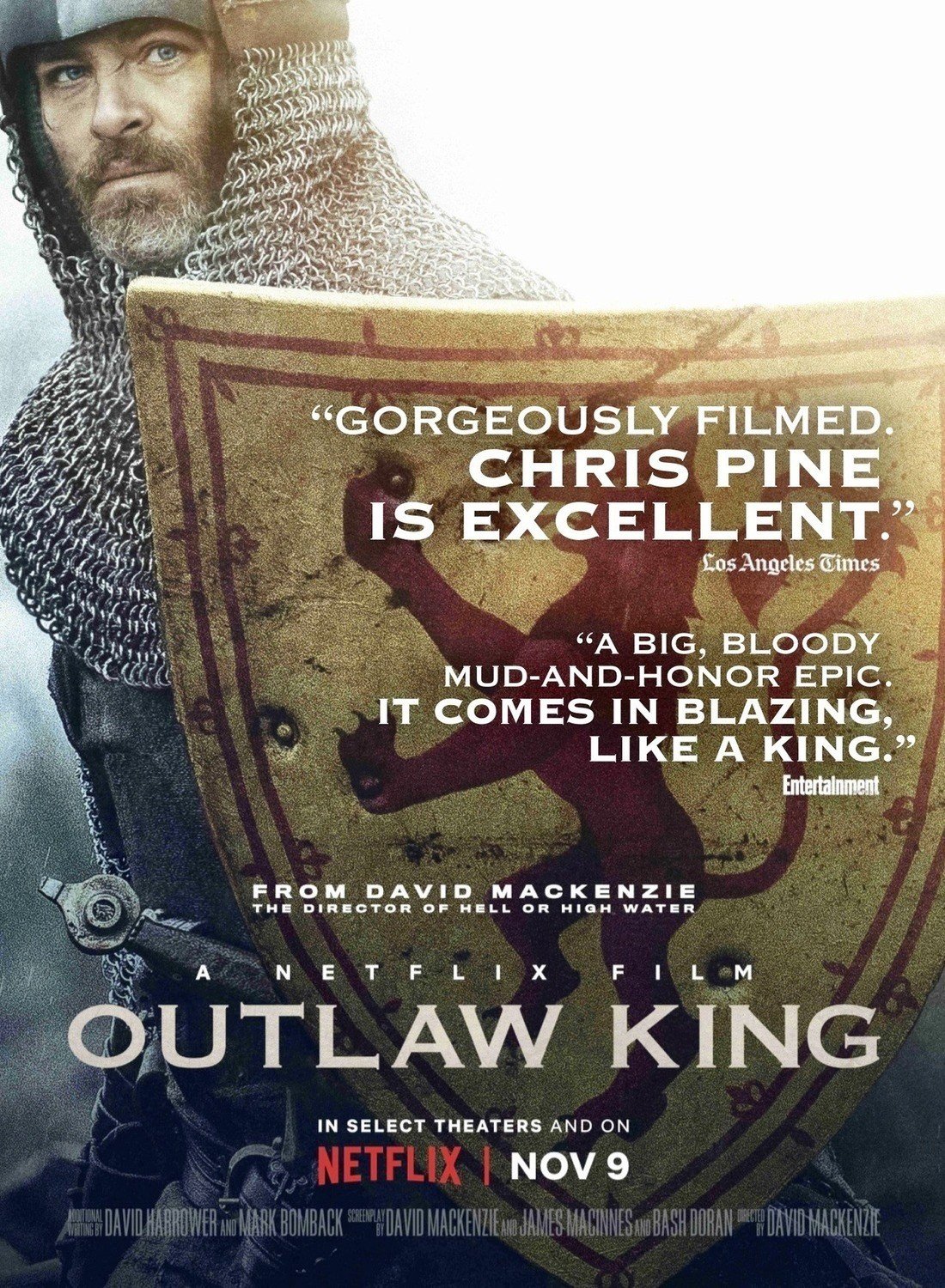 For freedom! I think!

Throughout his time on this here planet, Robert the Bruce (Chris Pine) was considered a legend amongst men. He was brave, courageous, faithful, and always willing to take down those who defied him. So it made sense that he would be crowned King of Scotland later on in his life and granted all the power and control that he could muster over his little kingdom. However, due to a little issue with one William Wallace, another famous Scotsman, Robert is thrown into exile by the British and now forced to reclaim his throne, by any means necessary. Of course, that will mean having to get his band of trusted warriors together, to hope that they can take down England, once and for all, and at the same time, be able to save Robert’s wife Elizabeth de Burgh (Florence Pugh), who is being held captive and doesn’t have much of a chance to live.

Outlaw King is basically Braveheart for the Netflix generation, but without any semblance of heart, emotion, or real meaning. Say what you will about that justifiably overrated piece of film, Braveheart is still a rather compelling movie that at least toys around with the idea of standing up for what is right, not letting the man get you down, and how kilts can actually make you bad-ass. But barely any of that is in Outlaw King, the kind of movie that just took all of that flick’s violence, action, blood, gore, ass-kicking, and accents, and nothing else.

Which is a shame because if you look at this cast and crew, you know that they can do much better.

Director David Mackenzie has, for the better part of a decade now, been churning out interesting work that finds him messing around in different genres, no matter how far and wide he goes. Even a disaster like Spread, the failed Ashton Kutcher-starrer where all he does is bang random women because L.A. baby, is still somewhat interesting Mackenzie puts his own cynical stamp on it, and it’s what he’s done for almost all of his movies since he first started. And sure, Hell or Highwater definitely gave him and Chris Pine some leeway to do what they wanted to do, especially with that Netflix money, but for some reason, this feels like a step back for him.

It’s perhaps the most ambitious he’s been to-date, but with that, also comes the forgetting of a lot of stuff that used to matter to his movies like characters, or heart, or even emotion. Most of Outlaw King is played in pretty much one tone, where scenes that are meant to be dramatic, have a swooningly big and powerful score, whereas the scenes that are supposed to be light, scrappy and fun, have something silly and playful playing in the background. It feels like Mackenzie had total and absolute control over the direction, but the script wasn’t for him to touch and because of that, the movie fails.

As well as does Mackenzie. And oh yeah, pretty much everyone else, too.

Which isn’t to say that Outlaw King is an awful movie – it’s just a very generic, bordering on dull medieval action movie that’s probably perfect for Netflix. It doesn’t demand a whole lot of your attention while it’s on and even though the action is quite brutal and fun, it’s not really up there that much to really sink deep into you. Once again, say what you will about Braveheart, Gibson was able to sink himself into the deepest depths of hell for that violence and as a result, you remember it much more and are, in a way, that much more disturbed by it. Outlaw King’s action is serviceably bloody and gore, but it’s never to the point of where it feels like they were just shooting Heinz everywhere on the screen.

Even the performances themselves seem fine, but never anything that transcend the shoddy material. Pine’s Robert the Bruce is always heroic and masterful, which makes his performance rather one-note; Aaron Taylor-Johnson proves that he’s great at playing a madman; and Florence Pugh is great in an otherwise thankless role as Robert’s wife, who wants to do and say more, but is stuck inside a boy’s club-of-a-movie. Her role is the one that actually seems like it wants to be more than just another old-school, medieval actioner, but of course, it pushes her back to the sidelines and makes her, yet again, someone to rescue. Wow. Never seen that one before! More please!

But hey, at least we got to see Chris Pine’s penis, right? Fellas? Ladies? Everybody?

Consensus: For all of its impressively high production-values and handsome battle-sequences, Outlaw King never rises above being a generic medieval action flick, with a cast and crew who are capable of much better, more interesting work.