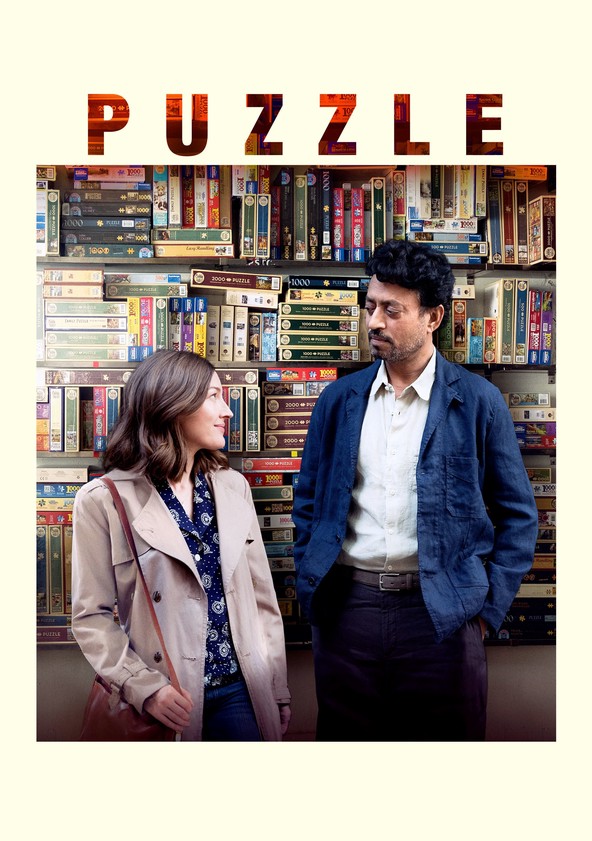 Agnes (Kelly Macdonald) is a good, honest, well-to-do, and loving wife. She’s also incredibly sheltered and Catholic, leaving her estranged from the rest of the world, with the exception of her husband (David Denman), and two sons, both of whom seem to be struggling in this time of growing up. And while Agnes doesn’t have a whole lot in her life that really requires all that much passionate attention from her, with the exception of obviously cooking, cleaning, and helping out with local church activities, she eventually finds her niche with puzzles. After all, she was so good with math, shapes, sizes, and figuring things out like that, so how could she not be great? And it gets even better when she connects with a fellow puzzle-doer, rich inventor Robert (Irrfan Kahn). Together, the two decide to be partners and train two days a week for a huge competition coming up and despite their very different backgrounds, they actually grow closer. Not just as puzzle-players, either, but as friends and maybe even, dare I say it, lovers!

Puzzle is a weird movie. It’s one that you want to adore and cherish because it’s so cute, sweet, and well-meaning, but it’s also a little too light, too thinly-written, and it also never really gets beyond just being a movie about two people working on puzzles. Sure, at its heart, it’s really about this lady Agnes and the way she begins to view the world in a different light after she begins talking to and hanging out with this here Robert, but really, it never quite registers. They have a few conversations about life, love and faith, and all of a sudden, Agnes gets close to being woke, which makes no sense, because nothing really happens.

But hey, it’s hard to hate a movie that’s about two adults just working on puzzles and trying to figure out life, right?

Well, yeah I guess so. But after awhile, it seems like they’re the only factors that Puzzle seems to be skirting by on. Macdonald, sporting a surprisingly-solid American-accent, brings her A-game to the role of Agnes, even though a woman like this doesn’t seem to exist in today’s day and age. For one, she’s barely 40 and she doesn’t Google? Have a cell-phone? Watch TV? Know what a Buddhist is? A vegan is? Does she even f**k? I get that the point of the movie is to lay home the fact that she’s so Catholic, so reserved, and so conservative that the outside world is a total mystery to her, but did she have to be written as an 90-year-old grandmother?

Like I said though, Macdonald is good enough to where a lot of these problems, we can sort of avoid and move past. After all, it’s a character-study about an older woman who gets a change out of life and we don’t see too many of those. The only issue with even this is that even her transition from being “Catholic, stuck-in-house mommy”, to “wall-breaker, balls-buster mom”, feels incredibly calculated and predictable after awhile. We know that she’s going to start lashing out, at the same things, having the same arguments, with the same people, and still not seeming to get anywhere. Puzzle seems to think that it’s fine if a character constantly yells at the people around them, so long as it seems “out-of-character”, that it’s “development”, or “story-telling”, and it’s not either.

It’s just the same old, same old. And it’s hard to fall for a movie that seems to so settled on the same thing, over and over again, without any true depth or power. Inside Puzzle lies a really deep, hopeful, and lovely movie about moving on in life and realizing the wonderful world around you, but it never gets out. Nor does anything else really?

But hey, at least those actors are so damn charming, right?

Consensus: With two good performances in the lead, especially from Macdonald, Puzzle barely gets by as an enjoyable, somewhat charming look at growing older and making a difference, even if there’s not enough puzzle-stuff, nor actual depth.