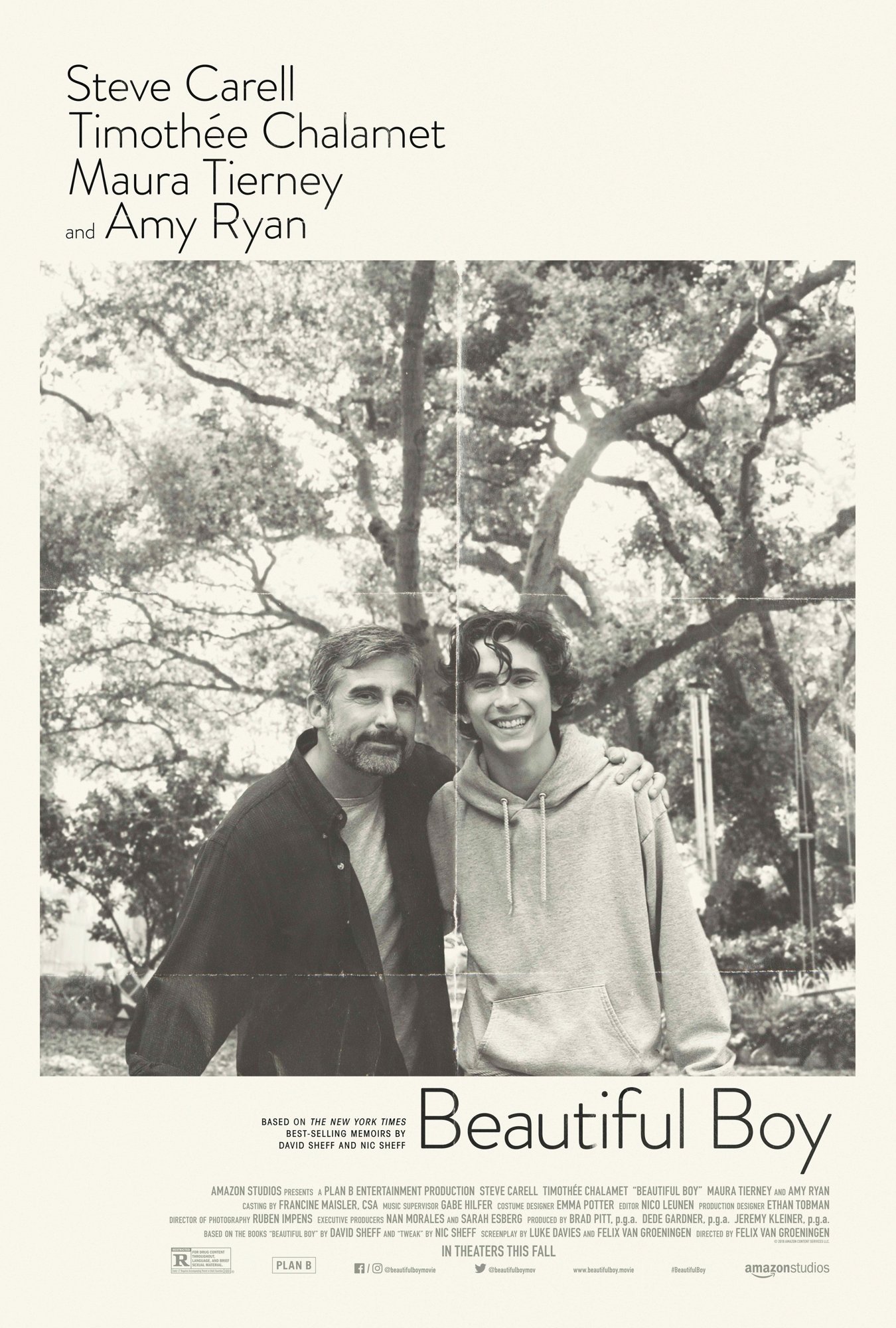 Nic (Timothée Chalamet) and David Sheff (Steve Carell) seem to have the best father-son relationship that kind of duo could ever have. They’re close, tell each other everything, seem to know one another from the inside and out, and most importantly, love one another no matter what. But when Nic graduates high school, something begins to change within him and as a result, with their relationship. Not only does Nic begin to grow further from his dad, but he also begins acting much stranger, staying out late, always tired, having a wild temper, and not being as reliable as he once was. And then, it dawns on David that Nic may be addicted to drugs, which he is, and it starts the several-year adventure of sorts into trying to get Nic sober and alive, while David also trying to maintain some sense of sanity.

But drug addiction is never that easy.

If anything, Beautiful Boy proves that it’s very hard to make a fully engaging, dramatic, compelling, and disturbing movie about drug-addiction, without it all seeming a little boring and repetitive. Co-writer/director Felix Van Groeningen seems to know this issue and do his very best to make sure that the material absolutely pops and blows up on the screen, even when it seems like not much is happening that didn’t already happen a few scenes prior. For instance, he uses this framing-device where the editing is all-over-the-place and non-conventional, making us wonder just what is happening, when, where, and how the relationships are between the characters. And yes, this framing-device is usually done for that sort of reason, but it makes no sense here in Beautiful Boy, especially all we are trying to do is find out how far gone Nic is on drugs and how close David is about to losing his mind over it.

In other words, it’s a drama, plain and simple. But it’s the kind that, while definitely well-acted and seemingly important, also feels like it’s a slog to get through. At a little over two hours, Beautiful Boy does move, but it doesn’t necessarily go anywhere, and maybe that was the point; the life of a drug-addict isn’t necessarily filled with non-stop highs, but mostly all lows. This sort of thing happens, again and again in Beautiful Boy, where Nic and David will be fine, until they aren’t, and while it makes sense because that’s the life of a drug-addict and the family around him, as well as that’s probably what happened in real life, it still doesn’t make for an engaging movie.

It makes for a very sad, somewhat meandering one.

Still, it’s hard to fully hate Beautiful Boy because it’s a movie that has something to say about drug-addiction and it’s how the constant battle against it isn’t an easy one, no matter how many times it may seem defeated and gone off with. The only issue with this movie’s in particular take on the issue of drug-addiction is that with Nic, it seems to hint at something deeper and darker going on inside of him that makes him do what he does to his life with drugs. There’s a few hints, bits and pieces there with the divorce of his family and how his dad may be a trigger for him, but it’s never fully explored; this isn’t to say that addiction is a sickness and should be treated as such, because it is, but there’s always some deeper reasoning for problems such as that and Beautiful Boy never digs in too deep.

It sort of keeps everything at bay, where Chalamet, Carell, Amy Ryan, and Maura Tierney, all give some small, but rewarding performances. Chalamet is especially good in a role that feels like it could have been over-cooked and over-the-top, with the constant screaming and running around, but he actually plays it in a very serious and almost nuance way that makes it much scarier to watch him descend into this life of darkness. The times where he’s lovely, bubbly, charming, happy, and well, clean, only hit so hard as they do because when things take a turn for the worse, you realize that this kid’s not going to be the same ever again.

And also, that drugs are the devil. Don’t get hooked.

Consensus: With solid performances and its heart clearly in the right place, Beautiful Boy gets by as a slightly better, more disturbing after-school special, albeit one that’s still a little predictable and formulaic.