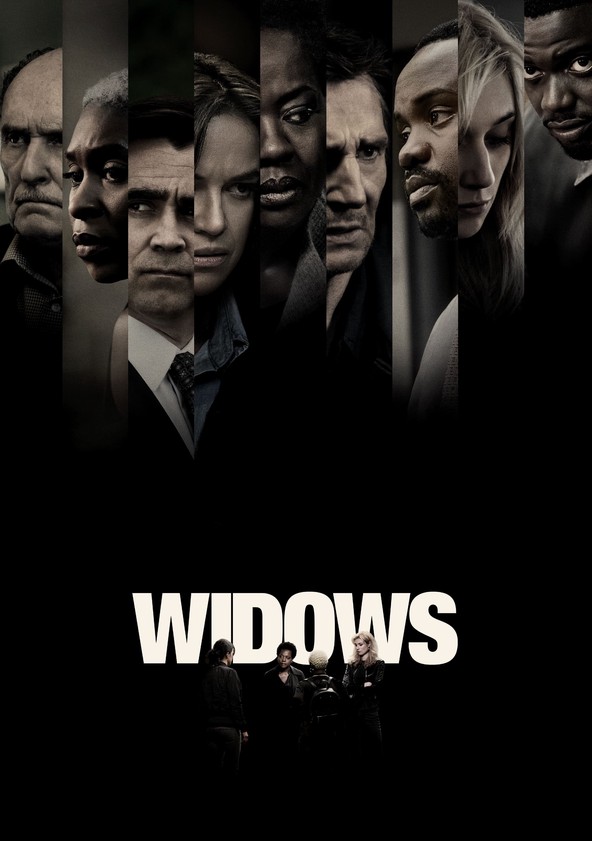 After the tragic and violent death of her husband (Liam Neeson) and his buddies/partners, Veronica (Viola Davis) must be left to pick up the pieces of her broken life. And just when she thinks she may be able to actually do that, she’s thrown for a loop when a local politician who’s running for district alderman (Brian Tyree Henry), was owed money by her husband and now wants to collect. Confused and without much in the way of finances, Veronica soon discovers her husband’s old notebook, chock full of tips of the trade, details, and heist jobs for the future. She lands on one idea that will also demand the assistance of the wives of the other guys who died in the botched job, like Linda (Michelle Rodriguez) and Alice (Elizabeth Debicki). However, for a strange reason, one of the wives (Carrie Coon) can’t be apart of the high-risk job, so they are able to get a hold of a driver in the form of Belle (Cynthia Erivo). Together, they’re going to do what it takes to get this money and get all of this heat off their back.

So often with so many star-studded, big-budget blockbusters, there’s not enough to work with. Not enough character-development, not enough plot, not enough originality, not enough action, and often times, not enough to really warrant a two-hour movie that’s also worthy of its budget. We see this so often in the summer, where the blockbusters are much bigger, louder, expensive, and as a result, much dumber, but come the fall and winter, we don’t really see these movies.

That’s why a movie like Widows is a god send, as it’s got so much going on in just about every little second of its 130-minute run-time that you don’t have enough time to breathe, sit back, relax, sip on your drink, munch on your popcorn, and think of where to eat at next. It’s the kind of movie that’s constantly moving and building itself up while it has your attention and makes you actually work a little bit to enjoy it; meaning, you have to pay attention and really figure out all of the pieces of the puzzle to get the full picture.

Normally, this would be too much, even for a movie as star-studded and as stuffed as this, but somehow, Widows works so incredibly well because it never forgets to be, above all else, entertaining. Which is great to see coming from the likes of Steve McQueen who, for most of his movies, wasn’t setting out to really entertain the audience, or even allow for them to enjoy themselves – torment and punish was more like it, actually. But with writer Gillian Flynn, he’s found a way to keep things fun, exciting and always compelling, even when it seems like the two may be taking on a bit more than they can handle.

Which isn’t all that surprising considering that this was adapted from a four-part miniseries on the BBC.

So yeah, it makes perfect sense that one would want to have this much more spread-out and layered a few more hours, but still, there’s something intoxicating about the whole overwhelming feeling of Widows and all that it tries to bite. Even the stuff that it doesn’t fully chomp a piece out of (like, for instance, police brutality or even white nationalism), it still makes a mention of and gives you a much broader, bigger picture of what’s really at play here in this vivid portrait of a modern-day Chicago.

Cause even though it’s a heist film, it’s also a small, sturdy character-study about being a woman and trying to survive on your own, when you have nothing else to fall back on but yourself. It’s also a movie that deals with the racism within the world of politics, and how no matter how idealistic either candidate is, at the end of it all, not much is going to change. It’s also a movie about the lives we live and how we’re going to survive, when it seems like the world around you is literally falling apart and crumbling.

But once again, Widows works so perfectly well that you don’t care about everything that’s being thrown at you, because you’re already too busy enjoying it all and actually paying attention for once. It also helps that Widows features one of the best ensembles I’ve seen in quite some time. Like no, seriously. We’re talking Altman-esque proportions.

Just to give you a good idea of who’s here, we have Viola Davis, Elizabeth Debicki (the true stand-out), Michelle Rodriguez, Cynthia Erivo, Liam Neeson, Robert Duvall, Colin Farrell, Daniel Kaluuya, Jackie Weaver, Garrett Dillahunt, Carrie Coon, Lukas Haas, and trust me, so many more. There are so many that by a certain point, you do sort of wish that there was a little something more for these members to do (like Coon, for example, who has maybe two scenes at the most), but as is, the main crux of this film is David, Rodriguez, Debicki, and sort of Erivo, and they more than make it worth the watch.

Consensus: Regardless of how many cooks it has in the kitchen, Widows is an absolutely intense, fun, exciting, and compelling ride that reminds us what a well put-together ensemble can do with the right amount of money and solid material to work with.