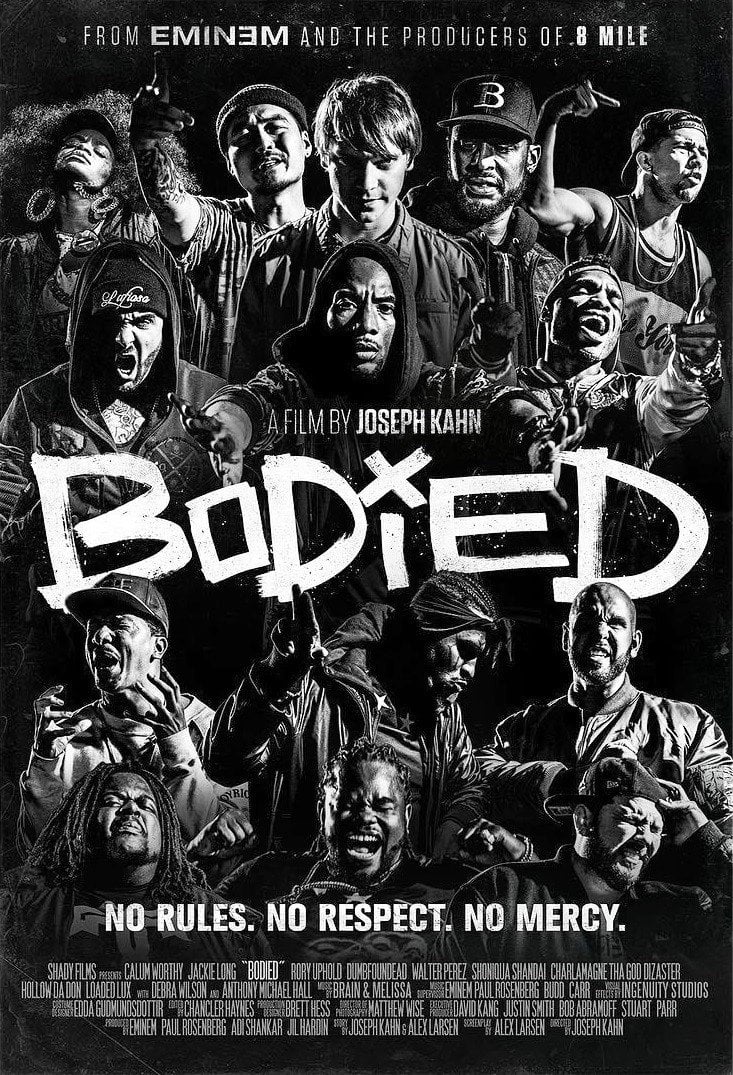 B-Rabbit was so last decade.

Adam Merkin (Calum Worthy), a white graduate student at Berkeley, is writing a thesis on the use of the word “n***a” in battle rap and he needs all of the help he can get. While he has a love and adoration for battle-rapping and rap in general, he’s still an outsider and is doing everything that eh can to get closer and closer to the underground world that is battle rap, the people in it, the politics, and why it is is what it is. But his girlfriend (Rory Uphold
), who he’s been with for quite some time, doesn’t support his ideas and thinks that this whole battle rap thing is just another excuse for grown-men to be racist, violent and misogynistic. While she’s not necessarily wrong, Adam still continues his conquest to not just finish his thesis, but also possibly become the next big star in the world of battle rap. Which, as you’d expect, isn’t so easy when you’re a white, nerdy, and privileged member of society.

The whole idea of battle rap being a real, competitive and hard-fueled sport is kind of a goofy idea, but it’s one of the reasons why Bodied works as well as it does. It takes that idea that making fun of someone and trying to piece together any rhymes that you can while doing so, makes it competitive and doesn’t take itself, nor the insults too seriously. And that’s sort of the point; we realize about halfway through Bodied that the insults opponents throw at each other, no matter how personal or offensive, are usually just passed-off as “part of the game” and not really thought about after.

But that’s what interesting about Bodied, because while it has so much fun throwing insults at its characters, sometimes the meanest, cruelest, and most awful that you couldn’t imagine thinking, let alone actually spewing at someone, it also doesn’t forget to remind us to think about what’s being said. For instance, it’s a movie that discusses what’s racist, what’s politically-correct, what isn’t, and most importantly, what certain people can say, that others can’t, in 2018, but doesn’t seem to be taking one side over the other. It takes a very centrist-stance on these issues, which may piss-off a lot of people, but the point of the movie isn’t to start fueling the flame, but to get a civilized, peaceful and informative discussion going where not every person is identified by where they come from, or who they may or may not have voted for.

And also, it’s interesting that a movie like Bodied doesn’t make really mention, at least not in the political-sense – I think there were a few cracks thrown at someone for being as tan or as orange as him, but that was about it. And it’s telling, too, because Bodied isn’t really a deep-thinking, politically-motivated, or even radical movie; if anything, it’s MTV pop-art that’s big, loud, silly, raunchy, and so comical, that at times it almost looks like a video-game. Director Joseph Khan seems to be doing this on purpose, in hopes of not just starting an uptick in the battle-rapping world, but also to bring us closer to these battles and actually get involved with them.

And yes, it should be noted that the rap-battles are great.

Imagine all of the battle-raps from 8 Mile, crank them up to eleven, add more cursing, more racism, and more updated references, and you’ve got Bodied. Once again, this may all sound corny, but it totally works; Kahn adds a certain level of excitement to each and every battle, as if every insult is another one closer to cracking open the Earth at its core, or one step closer to making the opponent just kill themselves right there on the spot. Sure, the cracks, the rhymes, and the spits are more than just offensive, they’re downright punishable, but listening to someone air out the kind of racism and hatred that you see everywhere online already, or hear in the news, well, it’s kind of interesting. It’s hard to say “fun”, but it sort of is – you never want to say this, or that, but hearing others say it all and walking away and moving on, all in the name of good fun, well, it’s quite exciting.

Consensus: Loud, obnoxious, hilarious, and surprisingly thoughtful, Bodied is a true crowd-pleaser that asks us to take its premise seriously as best as we can and for that, we’re given something invigorating and exciting.