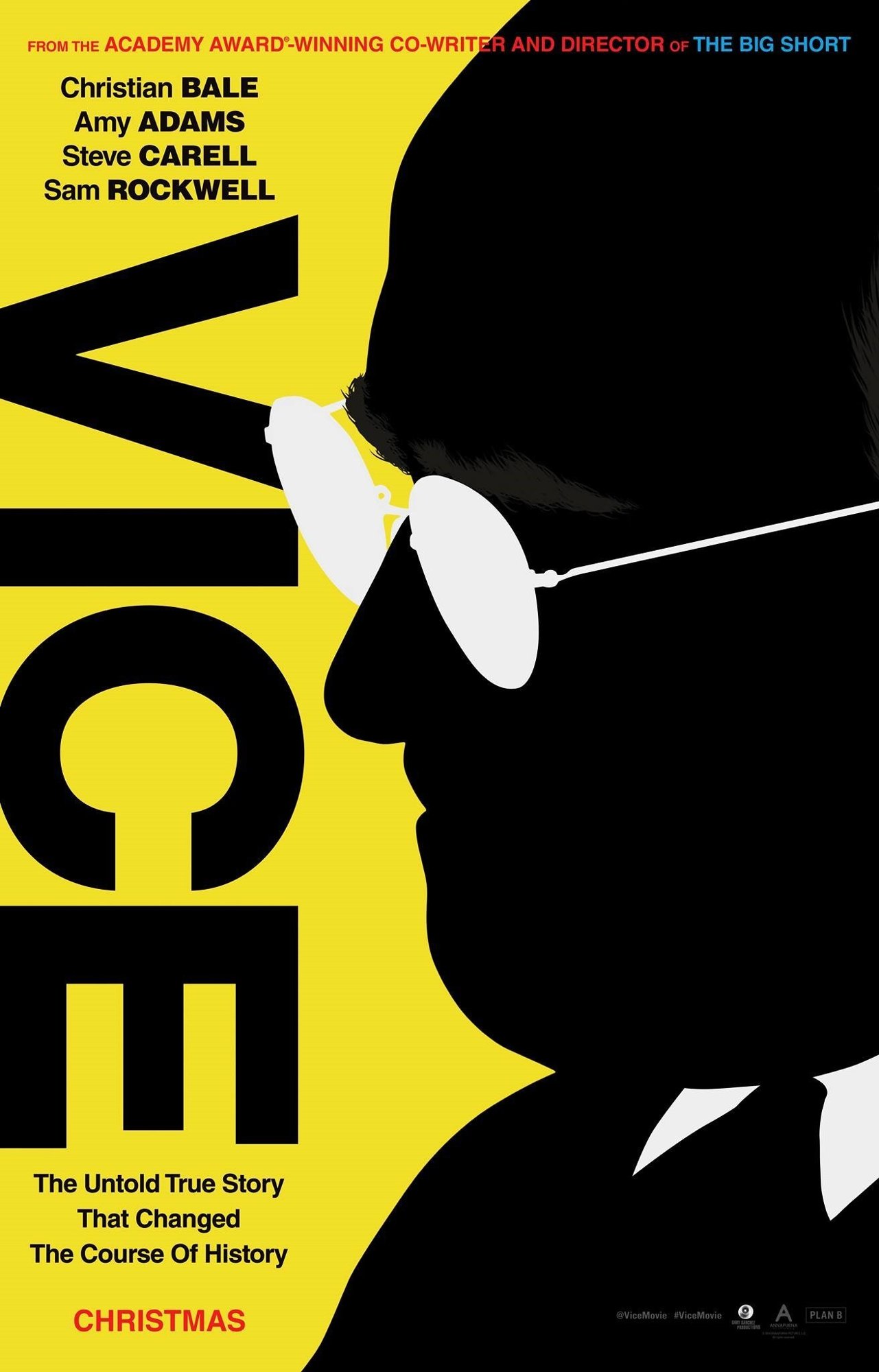 Man. What a dick.

Dick Cheyney (Christian Bale) had no clue just what the hell he was going to do with his life. When he wasn’t working his dead-end job as a construction-worker, he was getting hammered with his buddies and driving home drunk. Eventually, his wife Lynne (Amy Adams) came to him with an ultimatum: Either get his act together, or they were through. Obviously, Dick got his act together and it all came together perfectly in time for him to start an internship working under Donald Rumsfeld (Steve Carell), who at that time, was just the White House Chief of Staff. Working there, Dick got to know what it is that he wanted to do, what he supported, and what the rest of his life was going to look like. Then, he got really thrown for a loop when George Bush Jr. (Sam Rockwell) asked him to be his running-mate in the next Presidential election as a Republican.

And the rest, as they say, is history.

Tons and tons of inhumane, awful, disgusting, immoral, and downright maddening history that we as a nation still haven’t recovered from.

Vice is an angry movie, from a very angry person, and what can tend to happen when you have an angry person talking to you, they can get a bit out-of-hand. They start off strong and promisingly, with a point, an idea, and a certain direction of where they’re going to go, but once they get t’d off on one point, then they’re constantly adding on new stuff to be angry about and the ranting and raving never seems to end. It just builds up and up and up and up, all until you, the listener, is left there wondering: “Damn. You okay?”

That’s how it feels with Adam McKay and Vice – the man is absolutely angry, and he has a reason to be, but after awhile, the anger never settles. It’s always growing and because of that, we walk away with a movie that has a lot of bullet-points, points-of-discussion, and of course, the rants and raves, but not a whole lot of cohesion. That said, any movie that’s this pissed-off and not giving a care of who likes it or not, with this big of a cast and budget, deserves to be seen, talked-out, and actually praised, especially in these troubled times.

And no, I am not just referring to Trump, as easy as that may be to do.

But anyway, yes, what McKay does here is pretty much what he did with the Big Short and the housing crisis: Take a relatively boring genre (the biopic), with a boring subject (Dick Cheyney), and do everything in your power and might to jazz it up with as much pizzazz and style as humanly possible. There was much more in the Big Short, but McKay shows with all of this is that not only does he not want us to get bored when we’re getting bogged down by so many facts, and who was where, when, at what time, and why it all matters, but to remember the actual important details. Why a movie in 2018 is being made about Dick Cheyney, when we’ve had almost a whole decade of him not being in the White House, is a question that McKay sees, takes note of, and does all that he can to convince you in two-hours why this matters and why this story deserves to be told.

Cause for one, the mid-aughts were a pretty horrifying time to be alive and watching everything happening with the world from the sidelines. McKay makes it pretty clear that the crimes of today and tomorrow (war, or otherwise), do have a little something to do with Cheyney, his insistence on escalating a war, and more importantly, his need to become richer and more powerful than even the President himself. So yeah, Cheyney probably doesn’t need a movie about him, but McKay doesn’t take any prisoners when it comes to portraying him, and all the evil-doers around him, as maniacal and awful as they may have been in real life.

Still, Cheyney remains always the most immoral one in the room, as well as the one with the most power and influence, which is why McKay is so angry and therefore, spewing out everything and forgetting to take a breather. At times, that can create a mess that’s more unappealing than anything, but for Vice, it works and continues to make it not just a compelling biopic of an awful man, but to show us why once again this all matters and deserves to be discussed. Sure, the flashy performances from everyone involved is here to show that this can be an entertaining movie, even when it’s discussing the Iraq War, the numerous war crimes committed, Cheyney’s support of Bush’s anti-gay marriage law, him shooting somebody in the face and never apologizing for it, and last, but certainly not least, the Unitary executive theory (which is still in existence today).

So yeah. It’s deep, it’s heavy, and it’s angry. But I wouldn’t want a biopic about this awful specimen to be any other way.

Consensus: Though it’s no doubt swinging for the fences, Vice mostly keeps its subject interesting, while never forgetting to have us all understand why this is being told to us now.