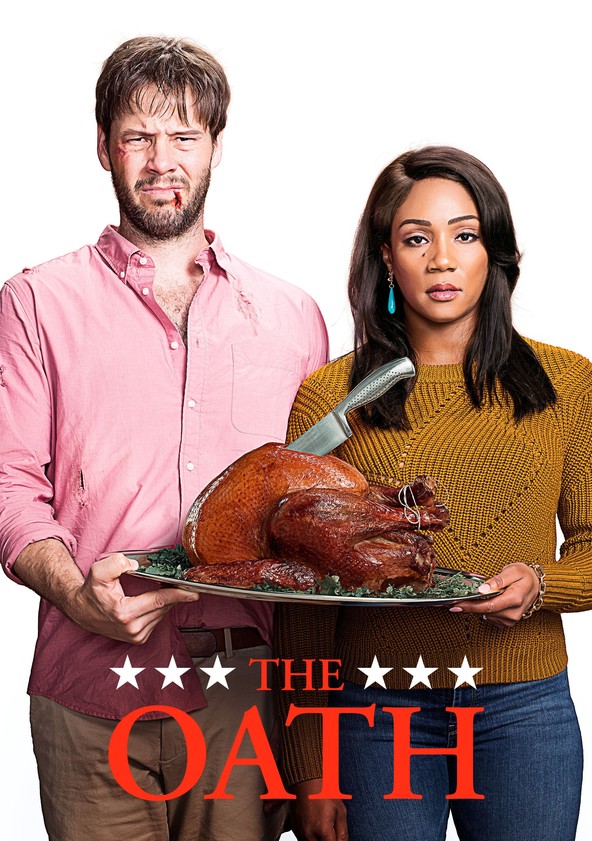 In a not-so distant/unbelievable future, U.S. citizens are being asked to sign a loyalty to the President by a certain date. If they don’t sign this oath, according the government, there will be no punishments, but their names will be entered into a database and whatever happens from there on out is totally up in the air. Living in this world and doing what they can to get by is Chris (Ike Barinholtz) and Kai (Tiffany Haddish), who love and respect one another so much that they know that, no matter what, they aren’t signing the oath. Especially Chris who is a such a news-junkie that he literally can’t go five-minutes without bringing up some sort of political news, regardless of if anybody cares or not. And it’s only getting more and more ramped-up for him when the deadline for the oath is coming up and more importantly, so is Thanksgiving. Which means that he’ll be in the same room, at the same dinner-table, with one too many conservatives from his family who don’t share his viewpoint. Will the dinner go by without a hitch? Or will all hell break loose in the fine, American tradition?

For a directorial debut, the Oath is impressive. Sure, it’s messy and definitely squanders its premise by the end, but for Ike Barinholtz, it proves that he’s more than just the loudest and most obnoxious guy in everything he shows up in; it proves that he’s got something of a head on his shoulders, a brain in his head, and a skill for telling a sad story in some very funny ways. Not to mention that it’s extremely ballsy to tackle politics so head-on in your first at-go, but then again, this is America in the year 2019, so if there’s anything you’re going to get all hot and bothered, and make a movie about, it’s politics.

And sure, while it would be easy for Barinholtz to just cram his liberal-leanings down everyone’s throat and prove that he’s the most sane and smart one in the room, believe it or not, he leaves a lot of room for the other sides to talk and show why he may be a bit insufferable, too. For instance, this idea that someone like Barinholtz’s Chris, who literally can’t live without the news in his life and therefore, the urge or will to get constantly pissed-off about something, is out there and even worse than the Conservatives who are happily hurting and voting to take away basic human rights, is an interesting one. It’s not because Chris is made out to be an awful person, but it’s because the Oath poses the idea that maybe, just maybe, the world doesn’t need to be fueled by politics?

Maybe, just maybe, we can dislike people because they are, well, unlikable? Or hell, even like a person, despite their politics? And if you can’t get past the politics, is that such a bad thing? Where does one draw the line? Why?

Is it even worth it?

These are questions that I myself deal with on a regular-basis and it’s why the Oath, even when it gets silly and mighty violent by the end (for reasons I won’t disclose), still kept me interested in where it was going to go and what it was going to say. It’s hard not to be disappointed that Barinholtz eventually gives in and just has a bunch of fun being over-the-top, but for awhile, we had on our hands here a very smart, yet also funny and honest talk about politics and all sorts of social-issues in the world. Maybe Barinholtz understands the answers to the questions posed above better than I do, but maybe, he’s just trying to figure out how the hell to survive in the world we live in.

Then again, aren’t we all?

Consensus: Though it doesn’t fully maintain its level of intelligence and complexity as it develops, the Oath is a surprisingly smart and funny take on modern-day politics and a sign that Barinholtz may be a triple-threat talent to look out for.