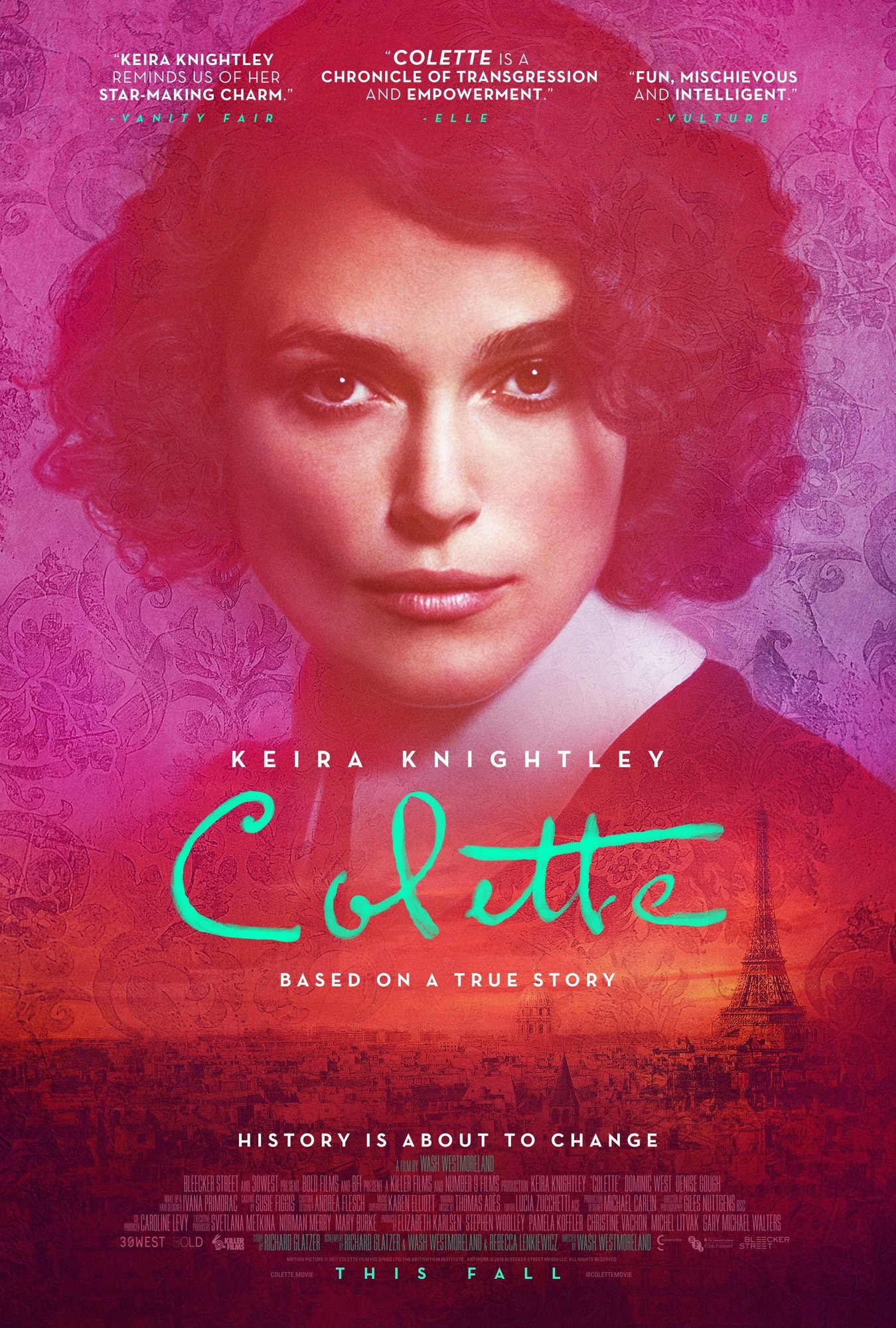 Early in her life, Sidonie-Gabrielle Colette (Keira Knightley) was just another girl from a small village who had hopes, dreams and ambitions of something far greater and bigger than what she could have imagined. For her, it was writing, but considering that it was the turn of the century, this was practically unheard of. But then her life totally changes when she’s married off to a wealthy Parisian, who also doubles as a writer and music critic, Henry Gauthier-Villars (Dominic West). While it starts out a bit rocky, the two eventually really do fall in love and begin to work perfectly together, both emotionally as well as creatively. And it’s around this time that Colette agrees to ghostwrite a semi-autobiographical novel for her husband, in hopes that it will not only get published with his name attached, but attract any sort of attention whatsoever. And it does, but once it does, their lives are forever changed.

Colette is the kind of biopic I wasn’t expecting much from, except the usual. A stuffy atmosphere, dapper-looking people, and beautiful period-settings, are all there, but surprisingly, Colette has a little more something to offer in that it gives us the look into a woman who was truly a trailblazer in her own right. An accomplished writer who fought the odds against sexism and discrimination, yes, but also a woman who expressed herself freely and willingly, regardless of what popular opinion was or wasn’t at that time. Colette, the movie, knows that its subject is an important one that every person should know about and by the end, you feel a lot closer to her, her story, and practically everyone else around her.

In that sense, it’s pretty much the perfect biopic, in that it does everything it sets out to do. It doesn’t break down barriers, or change the game in any way, shape, or form, but for a two-hour biopic about a famed literary-figure, yeah, it works quite well. Director Wash Westmoreland knows that the best way to tell this story is to do it efficiently, but also not forgetting about the small details in Colette’s life that still makes her relevant and understood, even by today’s standards.

Cause unfortunately, the same sexism and discrimination she faced, many women are still facing to this day.

And that, among many other issues, are discussed in Colette. However, it’s not the kind of movie that gets bogged down by all of this and surprisingly, remembers to focus on the much happier bits and pieces of Colette’s life. Like how, for instance, she did find love with her husband, she did find love with her lover/soon-to-be-partner, and believe it or not, despite some hesitation at first, she did find peace and solace with her work, despite it not totally not being under her name for awhile. Colette could have easily been all sadness and grey, but it surprisingly turns its head on its shoulders and reminds us that the same sort of love and passion that came through Colette’s work, was mostly funneled through the fact that she had much of it in real life.

And as Colette, Knightley is great, as per usual. She’s smart, spunky, and strong, especially when it seems like Colette has every obstacle standing in her way. Dominic West is also pretty great as Henry, her husband that doesn’t always do the best things, at the right times, but more than makes up for it in supporting and loving Colette to his fullest. It’s a fun and exciting performance from West, that is thankfully made all the better by the fact that we grow to know and understand this man for all of his flaws, even if there are the occasional times that we want to strangle him.

But then again, where would a strong, smart, and thoughtful woman be without a silly, foolish and sometimes asinine man screwing it all up for her, right?

Consensus: As far as biopics about literary figures go, Colette is one of the better ones because it enjoys the pleasures of its subject’s life, but also realizes the pain and hardship that she had to go through and is, unfortunately, still too relevant.